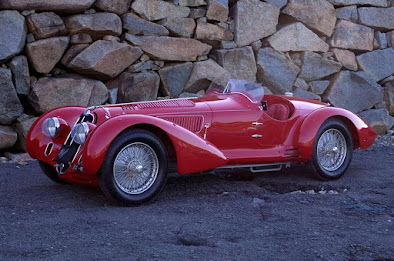 1935 Alpha Romero (that would be a cool dude to tool around in!
NOTE:  Yes Myra,  that was Shirl in the background of the photo of our friend Ann some entries back.. She and Shirl were buddies.

I was playing in the basement when Sherry called me to come up stairs. I was surprised to have a visit from the (attack) dog owners. It was both the neighbor and her son. They apologized profusely. The mother (who had been walking the dog) said neither of them slept much the night after the attack. She said son Todd cried and cried, nothing like that had ever happened in the 6 years they had had the dog.

Todd who is a great guy in his late 20s, (I would ID him a midget or a Small Person.) I have talked to him a couple times. He said he would pay any and all costs and Dr. Bills. He wanted to give us money for a Steak Dinner and said he would gladly come down and roll out our garbage from now on.

Todd gave us ALL of their phone numbers to call them when we got bills or if anything came up requiring ANYTHING, PLEASE CALL. He said, “I know nothing can make this BETTER, but please let us do anything to make it easier on you guys.”

The mother noticed the blood on the porch and drive and she would come down and scrub that out. (I said NO to the cleaning and garbage roll out.) The young man just hugged me and cried. He said you will not see the dog again. I will keep him in the house or back yard where he will do his business. He will not see anyone thru the blinds and bark because we will keep them closed.

Both had tears in their eyes as they apologized. Todd is such a ‘sweet’ guy. WE learned they are originally from Connecticut. He said he waited on the porch until after dark to catch us on the way back from the ER, but we must have come another way, and we did.

It is easy to forgive someone who is OBVIOUSLY VERY sincere, and I would hate to have bad feelings with our neighbors. AND at least we know them much better now.

PS: I am pleasantly surprised, there has been NO PAIN in the area of the Wrist damage. The PA just covered the hole left by the missing chunk and did a good job making it look smooth. I told her I wanted a bragging scar for the old folk, but she said no way!

Lastly:  Do you see anything wrong in this picture. He is trying to get the correct weight here.  ;-)
Posted by jack69 at 5:27 PM

Wow that was an apology like none other. It would be hard not to forgive. I sure know that was one big painful bite. They are worried you are going to have the dog removed.

So sorry about your arm. He took a big chunk out. And your chin. Ouch. I hate pit bulls, they have always scared me. The guy couldn't apologize enough it seems. I felt bad for him but feel worse for you. I hope you're not in too much pain. I'm sure your wife is taking good care of you. Again, so sorry that happened to you. Take care.

While it is nice they apologized and all. And offered to pay this and that. The damage to your arm and the rest of you, emotions too, jack... was very serious.you were tramautized by this incidence. what they are offering is too little too late IMHO. That dog is dangerous and needs to be put down or removed from the neighborhood so somebody else doesn't suffer the same fate. you take care of yourself. saying prayers you begin to heal.

Glad to hear your in no pain.
I am like you, I am easy to forgive. I can not hold a grudge either. I feel sorry for them as I know they did not expect this to happen but I think the owners should be responsible for the hospital bills.
They are really sorry this happened but more afraid they will be sued.
As far as the dog goes, They will make them get rid of the dog and in most cases have it put down. Thats just a rule.

What a conversation ... I love your sweet heart! Having walked that walk twice -- with my own dog -- I can really identify with the owners' heartbreak. The first time I cried and refused to let the authorities take him; but after I was hospitalized, Tom himself took Brewster to be put down. All these years later we still don't speak of it.

That video is so funny! He honestly doesn't get it and looks like, "What are they laughing about?"

Oh My, Jack. I just saw the pics of your bites. Personally, I agree with Lisa. It IS a rule about putting down a biting dog, especially causing so much damage. I'm sure you realize just how fortunate you are....dear God, take care of our friend Jack. It would also be a safe thing to either keep the wounds away from the feline until you're healed over. Cats carry way too many diseases even when tame. I'd hate to see you get infections too. Take care Jack. We all love you. As for today's video, getting the right measurement is sooo much easier when taking the 'scoop' OFF the scale. Hilarious....lol
loven'hugs from up north where we are lovin'our weather ...

OMGOSH- How awful, Jack. I am glad that people are good enough to step up and take responsibility. So many people today turn and run the other way. I hope. you heal quickly and that the pain level doesn't get worse. Sounds like you are on the mend. Hugs- Diana.....ps. I know you have a great caretaker there, too!

So glad your neighbors owned up to the damage done and apologized. I'm not sure but hopefully their plan works and no one else gets hurt. Hope you heal quickly and glad you feel ok. Hugs from Ohio!

So, so glad to hear your neighbors came to apologize so sincerely!

LOL - that little video at the end. Hilarious!!!!