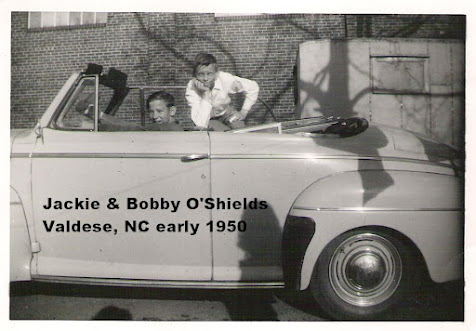 You have a lot of time to think when have a bad back and switch from ice to heat, LOL! I thought of my cousin, Bobby O’Shields, lately. In my mind I KNEW Bobby, after all his mama was my aunt on daddy’s side and his dad was a cousin on mama’s side. But the titles were always Uncle Irvin and Aunt Bert (Bertha).

I didn’t know his real name until I read his obit. It was Robert (Bobby) Jones O’Shields. 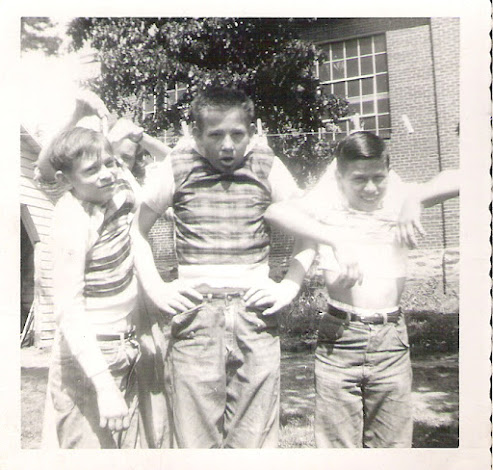 (Bobby, me and Guy Abee in Valdese one summer, Shirley hanging us on the line and Bobby's sister Mildred took the picture. Shirley and Mildred were like bobby and I, a lot a like)

Growing up, we spent at least a week together every summer. It was a delight to be with the family. Uncle Irvin was a giant of a man with  red hair, at least 6’ tall and 200 lbs. Aunt Bert was at the most 5’ and weighed less than 100 lbs, but as feisty and tough as a cougar. They lived in the back of their ‘country store’ called Red’s Place. 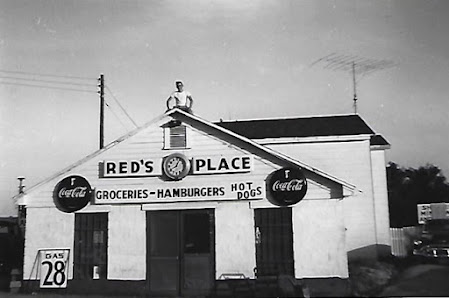 This was the picture with his obit. I went on to read the obit never noticing until later that was Bobby on top of the store. LOL

Bobby met and fell in love with Virginia, she had 4 children. They never had a child together and Bobby accepted her kids as his. I honestly never got to know any of the children.

Bob was an avid gun collector. He once spent the night with us in Charlotte when he attended a gun show there. We had time to talk. Yep I thought I knew him, but it was only from our childhood. I know he felt the same although all we had shared was a childhood. It was worth it because he was a sweet gentle soul, quiet and caring. He was the same the last time we talked in our 70s.

Our family men seem to merge with the families of the women we marry. It was the same with Bobby. BUT I must admit I was a little disappointed in his obituary. Whoever wrote it never once mentioned another member of his family. Not even acknowledging he was predeceased by a brother, sister, mother and father. BUT at least there was a picture of Red’s Place where he sold gas at 28.9 cents a gallon. ;-O

NICE that you made time to write this, another obituary. I'm sure Bobby appreciates it.
💛 these pictures!

Maybe they didn't know about his family when they were writing the obit. Maybe it's a good reminder for us to write on our ones prior to our passing. He sounded like a good man!

He was blessed to have a friend like you.

Hope your back gets better. Heat and cold, that is what I have had to do.

May he rest in peace.

I am praying for you all, Jack. Take care, my friend.

Our Lady of Lourdes, intercede for me and my family, cover us with your sacred mantle, I thank you in the name of the father of the child and the holy spirit amen 🙏

What great memories of your cousin. You did well to improve that obituary. May he rest in peace.

Yall were cute! I like the clothes line picture. I bet yall were a mess.
Lisa

Family memories of our youth do stay with us. Growing up had so many examples of goodness, shenanigans, love between cousins, aunts, uncles, .... what a peaceful pleasure remembering it all. I loved the 3some hanging out to dry and the country store with your uncle sitting at the peak. That's what memories are made of. I hope your back is getting better little by little.
loven'hugs from up north where my knee is a wreck...I'm starting to think I blew it out...as it's swollen, warm and feels so numb.....gosh, hating this aging stuff more and more..............stay healthy my friends