Some things just stick in my mind.

"Without pleasure man would live like a fool and soon die." - Pierre de Beaumarchais
From Bucko’s blog(Thanks Ken).  http://buckoclown.blogspot.com/
That has been running around in my head.
There are several blogs that use famous and infamous quotes.  Some use quotes that I have never read, and then there are some who are wise enough to come up with a statement that is so good, it will be quoted. I have a file called Logthegoodstuff. When I read something that strikes me I copy and paste it.  Such as:
… quote:

The problems we face today are there
because the people who work for a living
are outnumbered by those who vote for a
living.
(I pasted that one and did not see any name it was attributed to, but I like it.)
I guess that is why I like the  book of Proverbs in the Bible. The Proverbs are not only considered scripture, but are good logic and wisdom even for someone who does not accept it as the Word of God.
Someone told my mama that the Proverbs said, “Every pot must sit on its own bottom”. LOL. Well basically it is there, but not in those words. 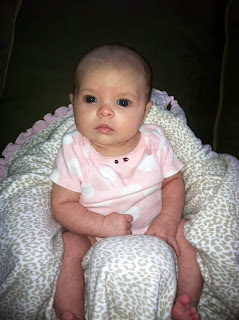 Not bragging but this is Sherry's Great grand daughter at 7 weeks, STELLA MC GEE.  Sherry says she already knows her ABC's, plays the piano and quotes Shakespear. She has audicioned for several parts on Broadway and signed with MGM. But she ain't bragging! LOL
Posted by jack69 at 2:36 PM

Thanks for the shout out!

Stella is so cute and so smart!! And for only 7 weeks old, she holds up her head pretty darn well!! It is good to have a good friend who is not afraid to speak their mind and give you good advice especially if you are going down the wrong road. It is hard when to move away from the friend or to have the friend pass :(

Love the book of proverbs. So full of good advice, a lot of advice about holding the tongue and being careful with words spoken.

i love your quotes and perspectives!!! and how cool you live in a motor home...lucky you!! our family of 10 rented one for 2 1/2 wks last yr for our summer vacation....we are hooked!!! it was so fun ...someday when our kids are grown we will hopefully be traveling like you.
I am your newest follower..pls follow back if you can.

As you know I have lots of favorite quotes. We can learn a lot from others wise words. Sometimes the book of Proverbs is like opening a book for life. I look there for a lot of advice when I need it. The great granddaughter is absolutely gorgeous . Babies are so precious. Hope your Saturday is a great one there...cold and wet here, but I've been busy all day inside so that is just fine.


please have a good new month and week ahead.

Ah! A Bentley when it shared its body with Rolls-Royce!
Now they are owned by Volkswagen (1998 purchase) and Rolls-Royce is owned by BMW. The German auto industry succeeded where Hitler failed in conquering England!

Stella is a cute baby...

MY QUOTES "GOD"S places His
Lighthouse within you". "GOD's
Lighthouse penetrates the deepest
part of your heart with truth,
love and Life". GOD's Light never
dims or flickers".

LOVE all the quotes. I do a daily cogitation on Twitter. I'm taryterre1 if you want to see them. STELLA is the prettiest little thing. Just TOO cute for words. A star, indeed. Shining brightly for her family. ENJOY!

That Stella!
I believe everything said about her - she just has that "knowing" look about her.