Everyone knows about the bridge on Atlanta’s I-85 collapsing. Yep, as in the trade centers, extreme heat can ruin concrete and melt steel.

I am glad no lives were lost but it is amazing how folks will continue into the unknown, because they are hesitant to STOP. There are video clips of folks driving right into that dense smoke. 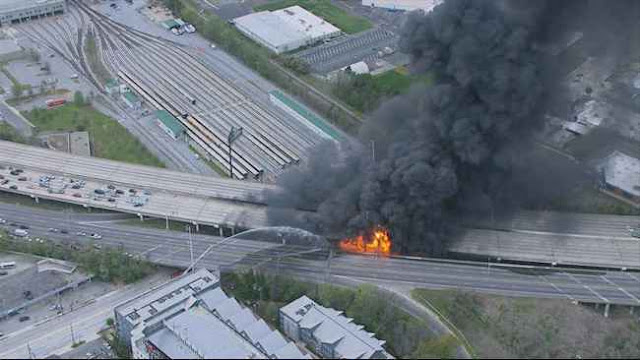 Commuters are familiar with traffic jams and will do a lot of crazy things to avoid them. Atlanta is a ‘crazy drive’ anyway. But even more so at start and end of the work day. That said, the only way to be in a 3-4 hour traffic jam is in a motor home. You have your refrigerator, stove, and TOILET!


In a traffic jam once we saw a lady weaving between cars as she walked headed to our coach. She knocked and asked if her elderly mother could use the bathroom, of course we were glad to oblige.  They were so grateful and I KNOW IT!

Backpacking the AT was such a throw back in time.  When you needed to answer natures call, a few yards off the trail, dig a cat hole and bury the remains. Simple and no consternation. 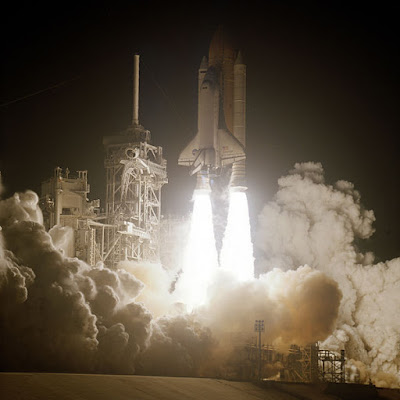 I smile thinking of Rose (Vondale’s wife) telling of the time they volunteered to travel from NC to Texas and Arizona and volunteered to walk the desert to locate debris from the terrible reentry of the Space shuttle Columbia. She said she was in a bad way, finally saw a BIG bush, she ran behind it and began to laugh. She said it looked like snow behind that bush where folks had used it as a ‘facility’.  She said, “Any bush in a storm!”

Many folk (250,000 cars a day) used that bridge. Lives will be disrupted. They will develop a new routine. We have a tendency to bounce back when our livelihood depends on it.

I hope your day is smooth. 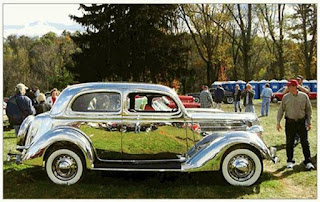 The 1935 Ford stainless steel cars, four were built. I would hate to have the sun in the wrong place for the reflection.

Oh, Jack. Your headline cracks me up. (I hope you have as much fun creating them as I do reading 'em!)

Perspective. A few weeks back the planned release of hundreds of gallons of water from northern lakes made my daily commute a nightmare. (The late Bob Hope is supposedly credited for having said, "Phoenix is a great city - when are you going to finish it?") Two major arteries had to be closed due to flooding, resulting in my one-hour drive becoming two, two-and-a-half. Thankfully, we only endured a couple weeks' inconvenience. My heart goes out to those souls in ATL.

That bridge collapse will put a hitch in a lot of people's giddyup, I can tell you that. But, like you said, commuters will adapt. (They will complain; but they will adapt.) Husband and I use that portion of the interstate many many times. Like millions of other commuters, we will seek out alternative routes until the repair is complete.
I cringed when I saw a video of cars driving through that thick black smoke with flames much much taller than the overpass. What in the world were they thinking??!! "Idiot behind the steering wheel" is all I could come up with. And to think that they are driving past us and along beside us as we travel.... ! Makes me angry (and afraid. )
J.

Hubby with his often over an hour commute for work has developed a series of side streets, etc., to get to his place of employment. I think he could be a cabbie or a pizza delivery person in some parts of the city since he knows them intricately from weaving his way through them. It does sometimes cut down on his commute and avoid the traffic jams on the freeways. I hadn't heard of this bridge collapsing. It will be an inconvenience indeed, but one people will adapt to one way or the other. What else can they do?

My husband also knows how to navigate anywhere if roads are closed, me not so much. And when nature calls, you have to do what you have to do.

Never would have thought about putting those two subjects together, but it's a fact, we humans can adapt when we have to.

One of my fears is broken or falling bridges. Since a child, I have had many nightmares of them. I have actually avoided the whole bridge story in fear of a bad dream. So if I have one of those bridge dreams tonight, Youll hear about it first thing in the morning!

As frustrating as adapting can be at times like the Atlanta bridge collapsing, travelers will most certainly do what they must to get from point A to B.
We will be having our own ' detour ' soon as the bridge by the paper mill gets replaced over the next several months.....you know the one.
As for the stainless steel car, we have a similar 'glare' from our barn roof. This is one time Bill wished he'd taken the advise to use a colored steel roofing over that shiny silver steel. Oh well. Another lesson learned even at his ol' age.
Hugs from up north where we bottled the last of our maple syrup this season, for the family. We put up 18 gallons of the liquid gold. YumYum