To take responsibility for yourself, you have to give up the need to blame others.
Most folk do not take time to see they are blaming others for ‘all’ their troubles. When I read the statement above taken from Ma’s blog (‘What’s New At My House’) I thought back in my life. Yes, I have been guilty of blaming others for problems that I should have solved without feeling the need to blame others.

It is sorta natural in the USA, because the idea filters down from our Government. When there is a BIG problem in the nation, many times, instead of looking for ways so FIX it immediately the blame game starts… In recent history some in the Obama Administration blamed Bush for years. Now the same will be heard from the Trump team, That was Obama’s fault. (That does not fix a thing)
.
Therefore we tend to do the same, unless we are careful…  I have tried for the past 35-40 years to take responsibility for MY decisions. When one is trying to accept responsibility, one must be careful or we will fall back.

When I wrote that, I thought of something I heard years ago:

“I didn’t say it was your fault, I said I AM BLAMING YOU!”
Now: Mira, Over at ‘Respice, Prospice’

http://mevely317.blogspot.com/2017/04/sunday-stealing.html
Mentioned a regret, that of not being beside her father at his death.

I remember my own dad, I was about six years old, and we were passing within a mile of his mother’s home. Dad was driving a ’46 Chevy at the time. We live about 70 miles away. Dad said, “I should go by and see mama, but we need to get back home.” 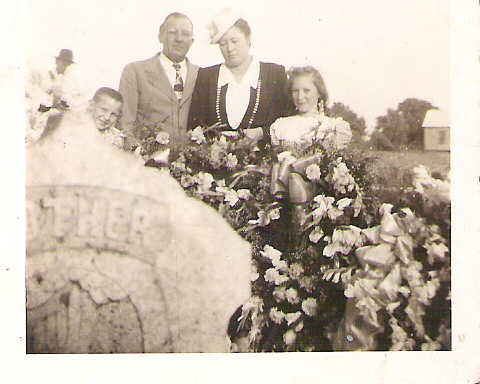 (Above is  Grandma Darnell's grave site, Me dad, mon and Shirl)

A couple hours later we arrived home and our phone was ringing, It was one of dad’s brothers, “Frank, mama is dying and asking for all of us.”

We arrived back but she never regained consciousness.  Dad hated that. Then many years later at his death, I could not be there. I was in an airplane circling Charlotte. The plane could not land due to bad weather. He was literally dying a few thousand feet below me in the hospital. I did not make it.  Yes, I too have that regret.

That must have been a terrible feeling circling and couldn't land.

So much regret seems to come with the losing of a parent and not being there. I'm sure our parents know we loved them, though it is hard living with such a regret.

i live with regret every day. but you have no choice but to get past it too.

Its natuarl to feel regret of things we have no control of but could have taken control of.
I also feel like there are reasons that we dont make it to desperate situations on time.

I was not here when my Dad died suddenly. We were on vacation in TX but what bothered me most was not going to the farm to say goodbye before we left. We were anxious to get on the road. Nor was I able to be with my baby sister when her husband passed. Regrets that we had absolutely no control over but still left that pit in my stomach and hole in my heart. Good read, Jack., as always. Your parents were an elegant couple with cute kids.
Love n' hugs from up north. It's SNOWING after a day in the 70's yesterday.

Interesting how you picked up on my quote about blame. Our choices all come down to what kind of life we have. I've made some bad ones but try not put the blame elsewhere. Just recently our house deal fell through and I'm trying not to blame a lender that should never pre approved a loan that never should have happened. It was my choice to accept the fact that they knew what they were doing, but mistakes happen and I'm thankful for yet another reason to learn something new. Moving on and moving forward is how I'm looking at things...no regrets, just many lessons learned.

Your boyish smile - amid Shirl and your parent's stoicism - looks so sweet.
I can't begin to imagine your frustration while circling the Charlotte airport! Only this morning I read a Facebook friend's account of arriving 20 minutes too late to her nephew's bedside. :(

I, too, am so tired of D.C.'s blame game! What's that old saying? When you point your finger at someone else, don't forget there are three fingers pointing back at YOU.

I remember that night Dad had just passed..I think the Taxi that was bringing you there was at fault and the bad weather for the plane to land. As ole Frank sings "Thats Life"..we can't change things and have to pick-up and go on or we will be left behind.

it's always harder
to forgive ourselves