Shopping is a sport!

I will never get over America’s love, desire, or need for diversity. I have ‘complained’ here about too many choices. I read on ‘Lisa’s Away from the Office Chair’ that she went shopping with her daughter, and there wasn’t enough stores!

Now the rub, and mark it, I am not complaining. Sherry has no girl here to go shopping with, so we go together. This girl seldom shops for herself, therefore when she does I would be foolish to fuss.  My ‘gripe’ is not with the cost but with the confusing VARIETY. There are at least a gazillion styles, colors cuts, half bras, push up , squeeze in, hitches in the middle of the front and some with 36 catches in the back. Even some that work on WIFI, they were listed as wireless! That is crazy, if I wuz a girl I would burn my bra!

Also men don’t fit too well in the ladies’ lingerie department of Penny’s & Dillard’s.  Well, I did want to help her try on Bra's, but she said ‘you don’t try on Bra's and underwear. Then it ain’t no fun if I don’t get to help fit them or at least see something modeled! 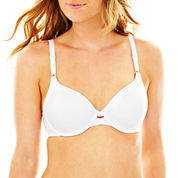 (I did snap one picture of Sherry but she would not let me show her face. She definitely does not look like she has been married for 60 yrs!)

Oh yeah, and panties! There are at least as many panties, even some that ain’t panties, just strings. Would Sherry get any of them, well no! (I might have misspelled well.)

Then to the shoe section. You women are crazy. Some of these shoes look like torture machines from the middle ages. And then shower shoes for $100!!!  At least that is what the USMC called ‘shower shoes’ (flip flops).  Now they are for dress? More strings thru plastic soles.

(The bikini panty shot was here, but I removed it (for safety's sake (mine). I am not completely crazy!)

No she did not get flip flops, she can’t wear them. She never got used to the thong between the toes. Anyway she is now into Vionics, to help her knees. She didn't get any but looked at some so I could order them off the net if need be.

Anyway, we then stopped by Burger King and I had a Whopper, she had a Whopper jr. I got to cheer up a young boy with a gold dollar. His brother also got one.

It was a good day, since I did not have to pick-out anything, Sherry waded through the million varieties and came home happy. So naturally I am happy. 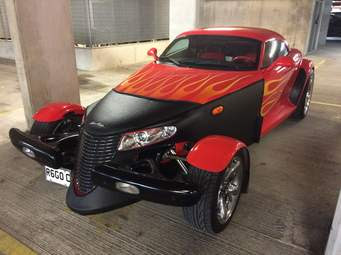 Our Overland Bra. I painted it as we passed thru San Antonio 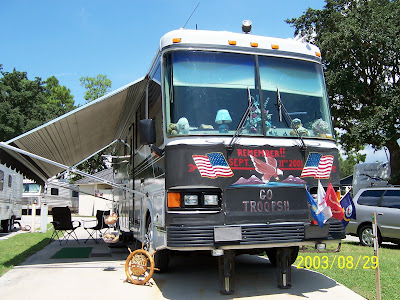 This picture was taken in Biloxi, Miss. a couple years later.

I'm sure Sherry appreciates your company when she's shopping. Though another woman's touch might encourage her to get something you don't think she needs. SHOPPING can be lots of fun but it is also tiresome.

I'm constantly amazed at how some shoes for women have a 5 inch heel or higher. I'm always telling hubby "I would kill myself if I wear heels that high." What amazes me is the jeans that have holes in the knees or slash marks through the fabric and the price they are. As a youth, my mom would have been mortified if I wore clothes like that; she probably would be patching them all the time :)

I am glad you don't mind tagging along with Sherry on shopping trips. Most men do not like to shop. I used to buy everything for my husband except shoes and he had to try those on first. There truly is a lot of variety out there to chose from. These days there is little I like and when it comes to shoes, there is very little that is comfortable for me these days. And when they are they seem to be the expensive ones.

hahahaha. How did I know I'd be mentioned in this post? Maybe that's the problem. Too many stores. I actually find a lot of stuff I like and quick, but its the cost of everything that gets me. I will carry an item around and think about it until I talk myself out of it. And we are bad about saying "well lets see what they have at the next store". hahaha.
And shoes.... I want three pair. One for church, tennis shoes for walking, and casual shoes for everyday wear. Oh wait...also a pair for the beach and a pair for shorts and a pair, etc... just kidding but not really.

Bras are a whole other story.
Lisa

Awww, but Jack, variety is the spice of life............so I'd heard. My baby sister and I went shopping today , the usual Walmart run for meds and thread, lol, and then to the thrift store. We seem to find the best stuff there and for cheap. I've been looking for a trifle bowl for the longest time and there it was and only $5. I told myself it was something I could sure live without but when it jumps right out atcha and says 'buy me, cheap, today only' well, I'm a sucker for it. As for those ' shower shoes ' as you called them, I live in flip-flops all summer but they have to have a nice arch. My bare toes gotta hang out. Easier to ' flip ' them off in the garden too.
(((hugs))) from up north. It's finally warming up again and we are lovin'it.

Oh Jack, you're on a roll ... bras that work on Wi-Fi! (Bahahahahaah)
I think you and my Tom are cut from the same cloth. He always volunteers to come into the dressing room and 'help.' Could be - aside from consignment boutiques - that's why I do the majority of shopping on-line. Anymore, going to a mall sounds more like punishment than pleasure.

I'd rather shop for window treatments :)
R

Anybody else is interested in getting a FREE BURGER KING GIFT CARD?