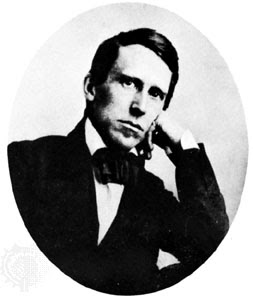 All my life I have heard of ‘wasted genius’. Men and women who had the ‘brains and ability’ to succeed in many walks of life. One I had heard of early in life under Mrs. Grill in the 7th Grade. She was very taken by the story of Stephen Foster. 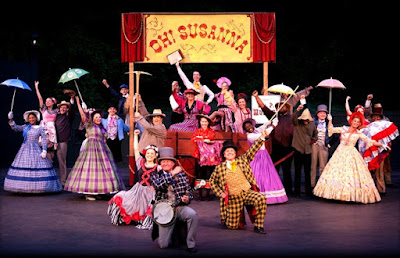 Early in our traveling we visited Bardstown, KY. A very pretty town and the place where Stephen Foster wrote “My Old Kentucky Home”.  We toured the home where he was visiting when he wrote the famous song.
There is a nice open air theater where his life in song is portrayed. Songs like  "Oh! Susanna", "Hard Times Come Again No More", "Camptown Races", "Old Folks at Home" ("Swanee River"), "My Old Kentucky Home", "Jeanie with the Light Brown Hair", "Old Black Joe", and "Beautiful Dreamer".
We visited twice and enjoyed it immensely.

Later we camped at Stephen Foster State Park in Northern Florida on the banks of the Suwannee River. With all his talent and success, he died in Bellvue Hospital after falling in his hotel in the Bowery. His leather wallet contained a scrap of paper which read, "Dear friends and gentle hearts",  along with 38 cents in Confederate script and 3 US pennies in his pocket. He was only 37 years of age. Bardstown, KY is big on Bourbon. I read that drinking was one of Stephen’s problems.

Here in NC, we were just visited by a man who is an expert in wood. He can talk intellectually on most levels. He knows most blue collar trades on a top notch level. Yet, he has never had a SS #, never paid income tax, nor had a checking account or credit card. He has the voice of a radio announcer and is in demand by several builders. He only works for cash and it is gone within a couple days for drugs and booze. He seems happy, but there are some hints in conversations.
He knows he has wasted his genius.

In life there are many folk who have not and will not reach their potential. Many because of fear, some who are lazy and some who are carefree, happy and enjoy going with the flow. Then the few who get side tracked with booze and drugs.

Genius is wonderful but does not spell success.  If one’s genius keeps them stressed, or if their pursuit of fame and fortune does not bring happiness they have wasted their pursuit for success.

Health nor happiness cannot be bought. You can abuse your body in a pursuit for happiness and lose it all.

Sorry to wander, but seeing my friend Henry again, brought it all back. 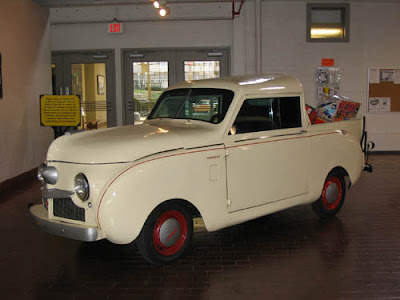 The Crosley, a forgotten car,  I did not realize they made a pickup. The small car, much before it's time.

Sad to realize you have blown your genius, but do nothing to remedy the situation in the future. I didn't realize Stephen Foster died at such a young age. He did leave a legacy of songs behind though.

I do love the songs of Stephen Foster. A lot of us grew up singing them. So sad what drink can do and drugs are evil for sure. Hard to believe there is actually someone this day and age without a SS number. Hope you all are enjoying your time in N.C.

I often see people and think "are they really that dumb or really that smart?".
I own a beautiful painting of mickey mouse that a man ( I do not even know but was a friend of a fried) in prison painted for me. It was painted on a bed sheet with his hair. It was so detailed. I would look at the picture and think how can someone with so much talent waste his life on crime. That was many years ago. I wonder who he was, what he did and where he is now.

I love the truck in your photo. Im gonna ad that to my "want" List.
Lisa

A co-worker and I were just talking day before yesterday about a chiropractor (shirt-tail relative) he knew who never paid taxes, and even went so far as to relocate and not secure a license to practice. Man, I couldn't sleep at night!

I remember singing Foster's songs in glee club, but never knew anything of his short, sad life. That scrap of paper ("Dear friends and gentle hearts") sure tugs at my heartstrings.

I have a relative that is so talented anything he does he makes look easy, but has never accumulated anything for himself, he is happy with his life I suppose that I shouldn't worry but I see wasted genius in him and fear he will be alone in the end.

I have got to check what has happened will not post my comments.
I remember singing Stephen Foster songs in school. Speaking of genius you are one and to bad I didn't get some of your smarts.

I knew of Stephen Foster's songs but not his sad life or it's ending. Thanks for filling in the blanks. Sounds like the place in Kentucky might be worth seeing on vacation.