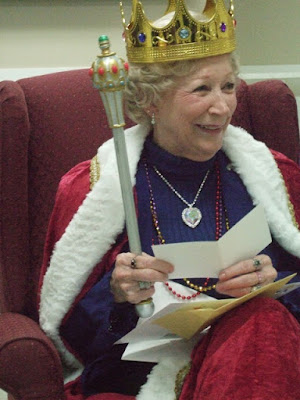 Once Smoky arranged  a Queen for a day Birthday party.

To be truthful, I am not sure if I am repeating myself or not, but here goes.

Shirley told me when she took dad in for his  by-pass operation that the nurse Asked her to take out dad's teeth. She laughed and told the nurse 'He would sure be mad since he doesn't have false teeth.'

I once wanted to ride my bike 35 miles to my brothers' in Shelby. I started and gave out after one mountain and 10 miles. I borrowed a phone and called home and Shirley answered. She volunteered to drive dad's car and get me. When she came, we cooked up the idea of her driving me the last 20 miles and letting me out to ride in and declare I rode all the way. She never told on me.

Once I was her passenger and she ran off the road on a mountain and knocked the gas tank loose. We made it to a station where the mechanic rode her HIGH. "This is so bad I probably can't fix it." He said he would probably have to call daddy and get a tow truck, etc.  After he scared her half to death he fixed the tank and didn't charge a thing.

She and her two friends had a trio and entered 'Author Smith's Talent Contest' in 1951. They sang "Because, Just Because". Shirley started off on the Accordion and on the third verse smoothly switched to the piano, playing with one hand on the piano and the other on the Accordion without missing a note.  They won and appeared on TV.

After her husband passed, she met Smoky Coe. He had owned a recording studio and gave Randy Travis his start.  He also wrote songs for Randy. Shirley got her life long dream to sing in a band. Smokey and the boys used her as the lead singer, she was in her prime and she was good. 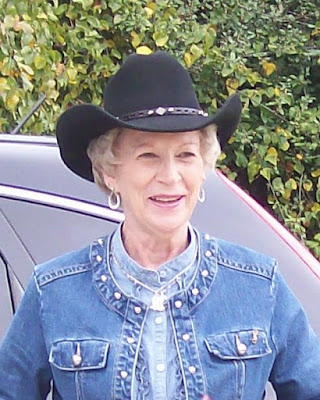 (Dressed for a country western show)


Now my sister is gone, her body is now a box of ashes.  I have NEVER held anyone's ashes. I look at that box and think this is my sister's ashes. 4 weeks ago I would have sworn she could about out run me, now she is reduced to ashes.  It is hard for me to believe.

Life can sure throw a curve.......  I never want to watch a person die again!

PS: Shirley would not want this this to end on a sad note, she was a cut up.  So here is Brenda Lee's words to "Because"...

We now have death certificates and continue with the procedures required in a person's departure from this life. Thanks for all the comments, notes, cards, good wishes and prayers.

let the good memories sustain you through this difficult time jack. i'm glad she got to live out her dream to sing in a band.

Life does throw a lot of curves our way. And we just never know when one is coming. I've seen my share of that and I can say we live through it and may have to do it again and again. You have such wonderful memories of your sister that she will live in your heart forever.


Shirl was one of a kind and she left behind a great legacy! She'll always be alive in your thoughts and your memories. I hope you continue to share stories about her in the days ahead. Life will go on, as you know it does, but it is never the same; we just have to forge ahead and continue to try to live in gratitude for all the blessings we have.

"Just Because", one of our favorites we play at Hospitals and Nursing Homes and other places. Nice Tribute, Good to see your "Post" ! You 2 take care ! Gary an Anna Mae

Your eyes see a box of ashes, but your heart? Oh my, dear friend. Keep on looking with your heart.
That business of taking out dad's teeth made me chortle out loud. What a wonderful legacy you're painting with your words!

You have so many wonderful memories of Shirl. Your sister will forever be etched in your hearts. I loved the false teeth story and had to laugh too.
And how wonderful that she got to sing lead in a band. What a life that she lived so well. Hold onto your heart, and hers. You, Shirl and Sherry shared so many memories that will always be yours.
loven'hugs from up north as you 'carry on,' but with a heavier heart for a while. Thinking of you always with prayer.

Well I love the little stories you told about her. She seemed like a wow woman if you know what I mean? She did so much. And boy did she love you - never told on you and protected you. Sang country music - and met Randy Travis. Sounds like she did a lot.
I do know what you mean about the box of ashes - my brother too. When we picked him up from the place - we put it in the backseat with my mom - and she just put her hand on it. Death is not easy.
I can feel your hurt and sadness and your disbelief. I can just feel it and I am going to pray.
I see you are writing your first comment - there was a fix done by google - this is from Diana:


How to get comments made on your blog go to your email again.

UPDATED TO ADD:
You will get an "invitation" in your email to
subscribe to the comments.

I was there when my dad died and several years later when mom passed. I will never forget either, but I’m glad I was there for them.

I'm really behind but this morning I'm reading all about Shirl and loving it.