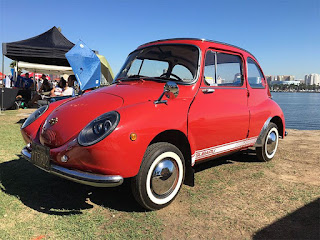 1960's Subaru, I do not remember seeing one of these

#2.... As we grow older, hopefully wiser, we slowly realize that:
There are people who make your life what it is, or change your direction. I will miss many but here goes continuing: Men in my life.

The surveyor…Preston Taylor. I met Preston in my years as a builder. He taught me a lot about ‘future planning. ‘At his suggestions, I held on to some land, and actually gave some away.  Both worked out well. I learned he was a giver himself, a volunteer who fed many children.

’My brothers.. Big brothers, I remember them going off to war in 1942-4. Handsome in their uniforms. They returned and having NEVER built a house, they both along with two others bought land in the woods cut the trees and built their own houses. I was Impressed.

Vernon and Lefty.. Sherry’s brothers. Neither with much formal education. Lefty was a Marine, wounded on Iwo Jima. Became a business man, and by hard work was successful.  Vernon, another family hero, Green Beret with three tours in Vietnam. Very quiet and non-assuming he shocked everyone when he became a leading volunteer entertainer locally.  Suddenly he could talk to strangers. Just a few days ago he had a woman he had never met, dancing in Captain D’s fish house. Entertaining the entire restaurant singing every word of “I’m my Own Grandpa”.

Ah, then Dan Doughton. My boss (leading Chief) in the Navy. Dan was a family man. He and Joan raised a beautiful family. Dan taught me ‘Steady as She goes” and your life will work itself out.  It did.

There are more of course, but I must quit. Maybe finish tomorrow.

Nite  Shipslog
PS: Did I read that sign right?
In an office:

WOULD THE PERSON WHO TOOK THE STEP LADDER YESTERDAY PLEASE BRING IT BACK OR FURTHER STEPS WILL BE TAKEN.

LOL with the sign about the step ladder gone missing. Good men you have had as mentors, friends, etc. I hope you continue the list tomorrow. And I bet you are on a few men's lists themselves with how you have helped others and been an inspiration to them.

Yes, I'm looking forward to more! You, Vernon and Lefty sure underscore it's not WHAT you know (book-wise), but what you CHOOSE to absorb out there in the School of Hard Knocks.

Both lists have been enjoyable reading, look forward to the next chapter!

Good Post, I look back with fond Memories and also sad memories of Growing up and growing older ! I look back nd realize they are those who are gone and now just a Memory ! Life goes on !
Enjoyed a walk outside tonight at 63 degrees! Hope you are behaving yourself ? Sending love and warm regards down from the North Country !
Gary and Anna Mae !

How wonderful to have so many important people in your life. And showing appreciation is a wonderful thing. It's aways good to let others know how valued they are and what a difference they make in your life. Those attributes like being a giver and being steady as she goes are something that would make a difference in all our lives.

I find myself absorbed in your memories as I remember those that had made a difference in my life. You always manage to write souly from the heart. It's wonderful to share your gratefulness so those who've taught you 'life'lessons. You're a good man, charlie brown.
love n' hugs from up north where it's ' finally ' starting to dry up more each day. The flooding has become an issue however from so much snow that'd been needed to keep our world greener. Our north Will survive.

wonderful men, for sure.