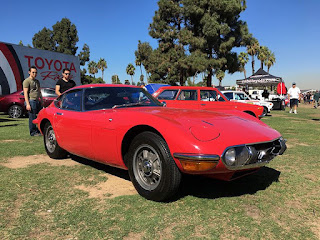 67-70 Toyota 200 GT
#4 As we grow older, at times wiser, we realize that:
There are people who make your life what it is, or change your direction. I will have missed some, but I continue: Men in my life.

Aboard the USS Independence I was in a small division.  I mentioned earlier DS2 Malanowski. He was Ski (pronounced Skee) to everyone in our division, and very respected. My boss was Mr. Linder, a Warrant Officer. We had been at sea for a few months and Mr. Linder offered a married man a dream, “Darnell would you like to return stateside for school?” WHAT? I did, I worked hard and graduated first in my class. No big deal some may say, but I was the only IBM qualified repairman on that ship of 5000+ men. Mr. Linder sending me back to the states put his career on the line to make me a better sailor. For the next few months while my shipmates were at sea I was home on weekends with my wife and kids. I will never forget Mr. Linder.

There was Kenneth Conrad. I cannot remember knowing a real farmer until I met Kenneth. We were friends for 3-4 years out in the Show-Me state of Missouri. I learned something about being a man. His relationship with fellow farmers was something. We attended the same church (I actually was his pastor for a short period) Once in the cold winter he, his wife and 10 children were a little late for church his elderly neighbor had called for help. One of his cows had broken thru the ice and was tangled in barbed wire in the creek. Kenneth drove his tractor down, stripped to his skivvies jumped in the creek, cut the wire and freed the cow. Temps below zero. He dressed and headed for church. He was also a veteran of WWII as a paratrooper in Europe. He and his wife Eileen, raised a beautiful family. Glenda the oldest of the Conrad girls, comments here on the Shipslog, love that girl. Kenneth and his son Harry both vets, are two of my heroes.

PS: I learned that the soap trick on gasoline was due to the chemicals in the gas and soap react to harden the soap rather than soften like water. Any soap works, just ht octagon worked better. LOL BTW Thanks to everyone for your comments, they make my day!

That was nice of Mr. Linder to give you the opportunity to return home to go to school but also to have the ability to see your family. I'm sure Sherry appreciated that!

Great farmer too in Mr. Conrad to go out of his way to help that neighbor! That is a good excuse to be late for church!

I just grew goosebumps, reading of Mr. Conrad's experience. I'd go so far as to say that would make a great movie. But, of course, Hollywood would say no-one would believe it. Just goes to show, none of them have ever spent time in the Heartlands!

Yes indeed, two more great men that came into your life.
Some great stories here. I almost feel another book in the making.

From the sunny West side
Lisa

Thank you Jack, brought tears; my Dad never passed a car by the side of the road without stopping to offer help. I've enjoyed this series. You were so fortunate with having the spirit that got the attention of your commanding officer, and an education that was a valuable learning experience --- plus a few hugs and kisses!!!

Jack I have been having trouble with my computer. It died. Now I have a new one that I am learning - so I am sort of back - lol.

It's so great to see what you've learned from these great men. Not everyone appreciates what others have to teach them. But there is a lot to be said for people that set such good examples. It's always our actions that shine through and are remembered. There is a quote that escapes me at the moment but it says something about people will always remember what you do and how you treat them.

It's wonderful, all you've learned. As a country girl, many times, I've seen my dad, uncles, hubby and brothers lend a helping hand to any of the neighbors, friends, farmers that need help. We do a whole lot of bartering so every favor works double. You and Sherry were quite fortunate to have time together while schooling and teaching your kids a trick or two at the same time. Thanks for sharing all your experiences learned from so many. You're a fortunate and grateful man that we adore.
love n' hugs from our warming north tho still very wet.

you were lucky indeed to be sent stateside to go to school and get to spend time with your family.