First, how did my entries get out of sequence? ?
Trucks of Art 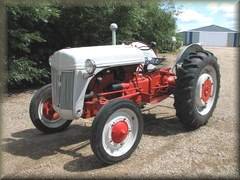 Ford built and tough. This tractor was built in the 1940s and is still in many fields!

Today:
I think about cars a lot. The early years of my life I always looked forward to the unveiling of next year’s models. Looking back at how the manufacturer and dealer made a mystery out of ‘What changes will you see?’ the new cars came into town wrapped in canvas and were unloaded at night and kept under cover until “THE DAY” of showing.
The cars were steel. They had ‘bumpers’ that would withstand some sever ’bumps and scrapes’. Some had powerful engines and others would get you where you wanted to go.
The new technology and plastic, wind tunnels and efficiency have changed those forever. I am no fan of the latest designs. The Cadillac is not much different in appearance than the Honda. The wind tunnels have brought most cars to the same basic shape so they can squeeze the best mpg out of the car.
BUT I must give the engineers an A+ on engine development. In my youth you were fortunate if you got past 65-70K miles before the engine had to be rebuilt because it was ‘burning’ a quart of oil every 500 miles. Smoking cars were NOT unusual. 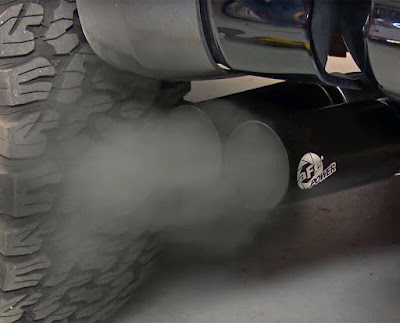 Now you seldom see an ‘oil burner’.  It is not unusual to have 300,000 miles on an engine.
I do miss the time when cars were more a work of design art. I do miss STEEL in cars. I removed the entire front from off our latest car by removing about 10 plastic clips and three small screws.
Sherry and I were walking once in an RV park as a man backed his new car off his tow dolly, the front snagged as it rolled off and he pulled the entire front off his car.
They say the car is safer now, it probably is. BUT sometimes a small accident ‘totals’ a car. A bump-up of the same impact, the 1950’s car would laugh at.
But all in all, the new cars are better, more expensive but cheaper to drive. I don't miss 13 miles per gallon. LOL
Nite Shipslog

PS: My cousin Ken says he bought my '48 chevy and when he sold it the man asked 'Does it use oil?' Ken said he told the man 'I can't keep enough oil in it to tell?'   (Ken tells stories)

You are right, Jack, the cars these days all look the same because of that "wind tunnel" effect. That's why I end up always going to the wrong car in the parking lot. We have a white Rogue but it also looks like the Chevy equivalent or the Toyota equivalent, etc. I've been known to wonder why my fob won't unlock the door of the car I'm by only to realize its not my car, LOL. I did have a lady accidentally open the door of my car once. I had forgotten to lock it. I was coming out of the store and saw her by my car and thought "I think that's my car." I walked down to it and she said "is this your car?" And I said "yes." She said "sorry, I thought it was mine." I told her I thought I forgot to lock it. Sure enough her car was one row over. A white car, but not a Rogue.

They do build longer lasting cars indeed. That's kind of good but you are right. They are more expensive. Of course though, hubby had to get a new transmission in his Nissan Versa at about 70,000 miles. Thankfully it was still under warranty :)

I know when my niece years ago started driving, her parents bought her an old "muscle type" of car to keep her safer on the road compared to what was out there at the time.

I remember the day of hard steel cars. I had a few. I also remember how easy it was to fix them. Many times I carried a screw driver, hammer and a gallon of water. Those three items seemed to fix anything that could go wrong on the road. Now you have to tear out the motor to get to the oil filter! Car motors are better now but smaller and tighter. You are forced to take it back to the dealer to be fixed.

I know squat about engines, but still LOVE this post. It doesn't seem that long ago my mother and I were driving to Alabama and she pointed out that cars no longer had bumpers. Like the nose on my face! Man I felt foolish for never having noticed. I do miss hood ornaments from my youth.

Sure, I used to dream about driving a Mercedes or other luxury car … but you're right. How could anyone tell, anymore?

Whoops! Should have said I "don't know" squat about engines.

I agree the most cars look alike these days. I really can't tell one from the other. Used to be you could recognize what kind of car it was. It's nice though that they cops less as far as fuel goes, but truly I cannot imagine buying a new car these days. The cost is out of sight for me. I've always had second hand cars in order to save money. Thankfully I've had some good ones. Right now I'm still driving a 2002 Focus. I think it will probably outlast me...

My love vehicle is still the shortbox 1950 Chevy Pickup.....someday I'll have one more than in my dreams...and it'll hold produce from my gardens. lol
Design, cost and efficiency has sure changed but no matter what you drive, it still gets ya from point A to point B. Bill's preference since loosing vision on one eye is the back-up camera. We don't drive the prettiest truck but it gets great gas mileage. Huge plus since we have to go so far for most shopping and visits to the kids at the same time. :)
love n' hugs from up north where we await the next snow storm due the next 2 days. At least it'll melt fast.