His last flight, no jump this time 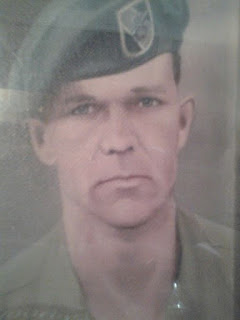 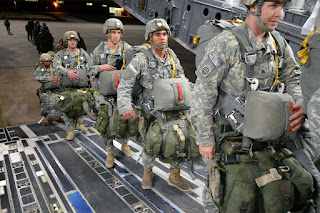 Sherry went up to see Vernon Friday afternoon. She came home with bad news; it didn’t appear he had much longer.

Just a few hours later, Tina called and said her dad had passed.

I talked (via messenger) to Rick in Saudi, and he had already been informed that his dad did not have long. With flights mostly cancelled by the Saudi Government, and the quarantine required on arrival in the USA his being here will be impossible.

Losing a loved one is always tragic, but during this Pandemic it has been made worse. 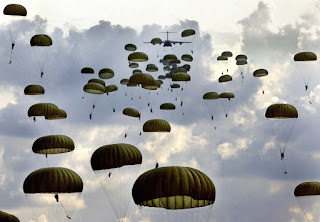 Small things catch the eye of us from military back ground. Tonight I kissed my hero on his cold forehead and held his hand as Sherry and Janet sat by his lifeless body and held his other hand. I looked across the room and saw a can of BRASSO on a shelf. Most people would not notice it. But when you have shined your belt buckle day after day using a soft clothe and Brasso, you remember. I even have a can of it somewhere.

I was able to salute my hero as he was rolled out of the home leaving grieving his wife (of 60+ yrs), sister, daughters and Cody*** watching.

***Cody, a nephew, told Sherry & I a short story as Vernon was loaded into the Hearse. Cody said, “In that Hearse is a MAN. A Man is not worth his salt if he does not keep his word. I was a kid when my dad died. Many people (kin and friends) passed that coffin and promised this kid lots of things. I am here to tell you that Vernon Gomez Harris was the ONLY one who kept his word. He has been there for me since the day after my daddy died. He has been like a father to me and I will always love him for it!”

I mentioned Vernon as one of my heroes, he was always a ‘Steady as she goes’ type of man. He was Sherry’s hero from childhood.

WE, and many will miss the old soldier. Jokingly I asked Vernon once, “Why would any sane man jump out of a perfectly good airplane?” 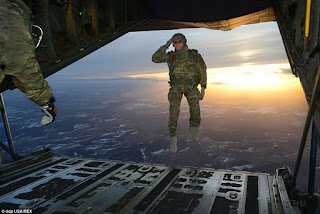 The family will always remember and miss a gentle giant who always kept his word, not only to Cody, but to everyone. To my Brother-in-law Vernon Gomez Harris, have a great flight.

He is now with his mama & dad, brothers Lefty and Tommy and two sweet sisters Collette and Lennie.

Jack and Sherry, I'm so very sorry! From what you (and Cody) shared, I believe this old world is a poorer place without this Hero's presence.
I hope you'll continue to share stories about Vernon whenever a memory comes to mind and makes you smile.

Jack and Sherry, I am so very sorry for your loss. I will be praying for your loved ones and all of you. I loved the stories here. Remembering our brave patriots is one of my favorite things. We recently had the opportunity to meet our son-in-law Jake's parents. Although his mom is an ultra liberal his dad served in the US Navy and was a deep sea divers. So my hat is tipped today to your hero and our hero too. May Vernon rest in peace. What a remarkable man he was. HUGS across the miles to all of you.

May rest in peace. So sorry to hear of your loss. This is a big one and I know he will be missed. You all are in my prayers and thoughts as you go through this difficult time. Sorry his son could not make it home. These times of Pandeminc have made traveling impossible at times. Thankfully you could be there to say goodbye.(((love and hugs to you both)))

So sorry to hear of Vernon's passing!! A fine man who left a wonderful legacy!! A honorable man who kept his word!! He will be remembered for a very long time!! Prayers for comfort during this time.

May flights of angels sing him to his rest ~

Thank you for this Uncle Jack. He was a hero to so many. Love you and Aunt Sherry so much.

Uncle Vernon was always my favorite Uncle. Always a big smile and little metal puzzles for us kids. He would give us 50 cent piece if we could solve them. After I quickly went through 5 of them he told me I was to dang smart! Later in life my own daughters got to know the joy that was Uncle Vernon. Love ya Uncle Vernon, I’m sure you, daddy and Uncle Earl are sharing some great laughs catching up on things in heaven.

Thank you for this wonderful tribute, Uncle Jack. I'm so glad people got to finally hear Cody's tribute to him. I'm proud and honored to be his son, did the best I could but trying to equal him proved to be too tall an order. I don't mind telling folks I set my sights a bit lower, then was able to achieve a few things. Trying to match someone like him takes a person with far more than I had in the ammo pouch. But that was all he ever asked, just do your best!

I'm so sorry for your loss Jack and Sherry. What a beautiful tribute. He sounds like a true hero in a world that could use his example of what the word hero means. Prayers for you and your family.

It's obvious what a true ' hero ' Vernon was. I didn't know him, but of all that's written here, how can I not weep at his loss to you all. His heart was with you all. Another star shines in the heavens I'm sure. God Bless each and every one of you that knew and loved this fine man so well. Rick, I'm sure you are a ' hero ' in your daddy's eyes too. I also want to thank you for your service. It's a hard time in this world and it's honorable men such as yourself that keep us free. Thank You. Sherry, many thoughts and prayers for you and Jack as you savor sweet memories of your dear ' hero' and brother.
love n' hugs from up north where our prayers are with you.

What a hero - and he came full circle. I am so sorry for Sherry losing her brother. He was a real hero and I thank him for all he did for us!

Oh I’m sorry to hear that Sherry lost her brother. I will keep you guys in my prayers.
My eyes teared up with Cody’s story. Bless his heart.
And boy, what a man will do for 50 bucks!!! Ha.

I am just here catching up. Hubby's health here is not good so we are running the gamut with tests and caretaking. I am so sorry for your loss. I know Sherry mourns him. It is heartbreaking to lose a brother. Blessings to you all- Diana

Uncle Vernon was the grandpa I never have growing up. My dad (the Cody mentioned above) would always take us to Bojangles on Sundays for breakfast with him. He would always make us laugh and if I learned how to solve one of his puzzles he would let me go up and buy a bo-berry biscuit. When I got older my dad and I would go to his house to visit him and Janet and we would sit and watch old westerns and talk. One of the last times I saw him before I left for college was when I was working the morning shift at the Hardee’s register (2018). Him and Rick came in to get breakfast and after my shift I sat and ate some with them. I could tell age was getting to him and he couldn’t fully recognize me, but it was nice to eat that one last breakfast with him. He never knew just how many people’s life’s he made brighter

Sherry and Jack, I am so sorry for your loss. Prayers for the family. God’s calling a lot of great ones home this year.
Sending love and hugs, Sheila

Ill never forget pawpaw talking to me.when i was in making a decision to join the dog team..and possibly deploying to iraq. he was straight forward.And before he passed me and him set alone and i said pawpaw..im a veteran and ur a veteran..i nervously asked him ive seen stuff too..can you tell me about vietnam...he looked and said ok...and we talked for good 20 mins..for that 20 mins..i felt like .id earned my pawpaw respect...and until the day he passed he kept my petty officer medal.