Sherry and our 1953 Plymouth, some of you remember maternity clothes. 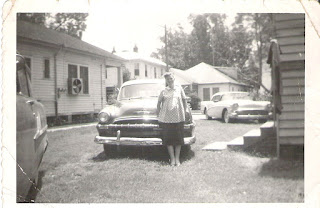 In 1962 I came home to announce we were now in the USAF, and headed for Biloxi (I pronounced it BYLOCKSEE), Mississippi. Once we arrived and were settled we learned that we were living in Blucksee.

We became friends with a lot of folk there, at that time the biggest thing in Biloxi was Keesler, AFB. The main industry was fishing, mostly shrimp. I had no idea I would like to eat shrimp, in NC we used shrimp for bait many times.

I learned how oysters were harvested, and after a while I found out that shrimp, weren’t that bad to eat. And shrimp sold for 5 lbs for a dollar.

Biloxi also gave us our first son, Jack Jr. I think his price was about $20.

Sherry also learned to make ‘pea salad’ there and it went great with any seafood.  This all came up because I deep fried fish and potatoes last night and Sherry fixed Pea Salad.

My mind went back to Biloxi and the many friends who have now passed on, and the rest too old to get-around.

That pea salad sounds delicious and so easy to make! I'm going to try it! I can't imagine 5 pounds of shrimp for a dollar! Wow, what a bargain!!! Life truly is good; we need to enjoy all of the days the Good Lord give us!

Love the Pea Salad, Anna Mae makes it, Glad things are going good in NC, We are having 10 to 15 MPH winds and 30 to 40 MPH gusts, had a downpour last nite. You 2 take it easy and sending down warm wishs from the North ! Gary an Anna Mae

Sherry's pea salad sounds yummy right about now. 'Cept I'd have to eat the whole thing myself, on account Tom would think I was trying to poison him. That man would rather kiss a snake than eat a pea. LOL. Good to know the correct pronunciation of Blucksee!

I love pea salad but never made it. Now I want to.
I have always wanted to go to Mississippi. And yes I had to say the jingle to spell that.

I was thinking the same thing about the $20 dollar son...well spent. I haven't made that pea salad for quite some time.....and we're having fish tonight....guess what I'm going to make to go with it, thank you very much.!
I do love shrimp but haven't had it in a long while. Glad you guys are settled once again. I've been trying to finish mowing the lawn but it keeps raining. The grass will be long enough for wind rows. Oh dear.
love n' hugs from our north WI where the creek runs wild over the top of the bridge and making our trickle look more like a wide river.

Good memories - 5 lbs for a dollar - you can't buy 1 shrimp for a dollar now. I love pea salad too. Yummy meal.