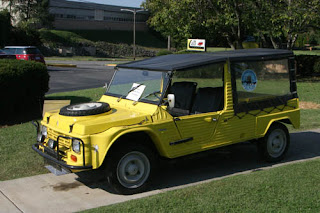 For Thursday’s stuff:
We were sitting at our monitors as usual yesterday morning when Sherry said a couple of the kitties are up on the deck. WE looked out, it was Stormy and one of the little black kitties. She sat and let it nurse for a while.
(Pictures are not good shot thru screen wire) 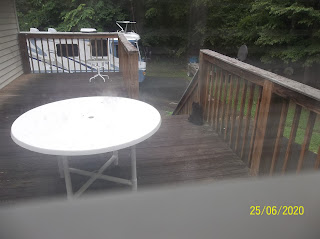 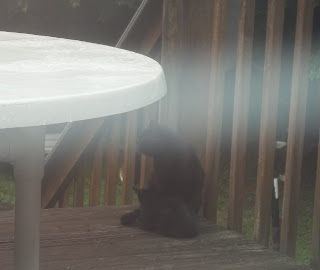 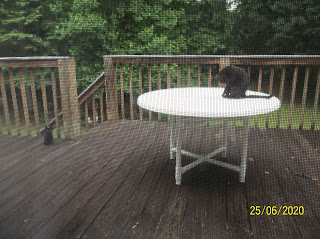 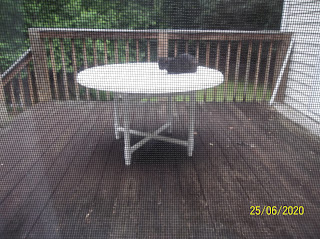 After a while Stormy broke it off and jumped up on the deck table out of reach of the kitty. The kitty tried and tried to figure a way to get up to no avail.

After washing herself for a while Stormy took her napping position and took a nap, one tired looking mama.  After about 20 minutes the little one retreated to the new home below and Stormy took a long over due nap.

Later I served her a well-deserved dish of milk. She drank it in peace up on the table. She is worn out and methinks it is past time to stop nursing. I have been wondering if the CAT food is too big for the kitties, I have moistened it some. Now I have cut it down in size in the blender. I hope they eat it better.

Stormy allowed me to get a closer look at her head. It appears something bit her, I was thinking a copperhead, but I do not know. The lump on the side of her head is hard, and she did not flinch when I felt it, so it must not be sore.

They are all enjoying discovering new places to hide. Stella and her friend were over today trying to pet some of them. They had very little luck. LOL These dudes are fast.
Nite Shipslog
Posted by jack69 at 9:47 PM

Hey, Nice looking Deck you have there ! Our Cat Tipper loves to sit in the window and watch the birds and critters, What ya gonna do with all those Kitties !!!! It that the freshly waxed Motor Home in the background off the deck ? We are now in a "Heat Wave", 80 to 85, Hot and Humid, and stay out of the sun type of weather. You 2 take care, Sending down love and Prayers, Gary an Anna Mae !

I would imagine Stormy would be tired, caring for 7 little ones! I wonder if the internet offers any advice on when kitties can be weaned to cat food and how to do it. I bet Stella and her friend had fun seeing the kitties though!

You are so sweet to Stormy and her little kittens - that is so nice. ☺

When we first brought Macie and Grace home, the breeder advised us to get a special powdered 'mother's milk' formula. 'Twas a mess preparing every 4 hrs., but they thrived. Maybe that's something y'all could find at your local PetSmart, and give Stormy a well-needed break. Love how you're taking such good care of her!

Poor mama! Try the above suggestions! What is the knot on her head?

When a sow would abandon her piglet, we penned them up and fed them "mother's milk". Powdered, I tasted it and it was darn tasty.

Bless her heart. That little mama should get spayed when this is over.

what a sweet story about stormy momma and her kittens. adding moisture may help the kittens eat the food better. our kitty mira is older and she licks her food instead of chewing it. so we switched to wet food, but she still just licks it. her teeth are having trouble.

After reading your posts, I can relate to Stormy, OMG that girl has a tough life! But, she keeps hanging in there, awesome fortitude! Love and warm hugs from Chobee p.s. Next time you get a chance, please give Stella a hug and let her know it came from "Aunt Glenda. Tell her that I'm proud of her :)

Stormy is one well loved cat. You take such good care of her. Good thing she brought her family to your home so you could do so. She sure fills your days. Hope she is ok and with some tic will recover. before she gets pregnant again.