The chef and you cannot predict cats! 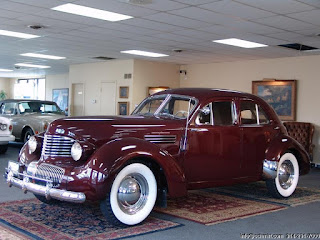 This is a 1941 Graham, I know you would like to drive that to church or the mounatins.

I have been doing most of the grocery shopping. A couple days ago I went in to get more wax for the motor home and also to get the few things on the list.

Since it was close to my time to cook I decided to get a roast and put it in the slow cooker. I picked up a nice roast and saw the price $26.65, WHAT? I looked at a smaller one and it was $18.35. I bought a pound of hamburger.

Then I saw a nice 4 lb center cut Pork Roast for about $13, why not, I have never cooked a pork roast.

Yesterday I did the deed. Looked up what would go with it and the only thing listed we had handy was potatoes, onions. Then I saw ‘wilted lettuce’. Never fixed it; never ate it. Why not? It turned out good, but with a pound of waste, fat and dark meat. (Cats loved it).

BUT before I started cooking I decided to go over to Jim's and feed the kitties. Stormy was at our door, I gave her a small treat of ‘fancy feast’ and walked on. No kitties came out; it was a little cool so I figured they were sleeping in.

Stormy was still eating when I got back and I decided to check the trail camera. Saw a coon, gotta do something about that. Then I saw this under the John Deere I saw two eyes: 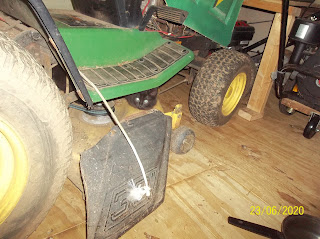 I saw no kitties around.

Later Stormy came down and I saw a couple more kitties. So I went over to Jim’s and got the food. And oh, #7 is back; probably never gone just not around to be counted before. Michelle had missed one too, but all 7 have reported for duty. Mama has moved them over to our house. 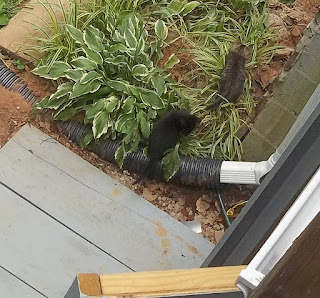 They are busy exploring. And that stinking Stormy D will hardly let me pet her she is extra skittish. 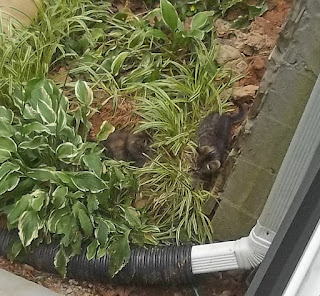 below is a few seconds picked up by the trail camera.

So glad all the kitties are accounted for!! Maybe Stormy is skittish because there is some other predator around other than the raccoon?? Beef roast can be expensive, especially the good cuts. We are going to get daring when the summer is over and make a leg of lamb. Have never made one but found an interesting recipe for it.

I know what you are saying, there has even many times I'll get hamburger instead of a roast or even a steak. Pork roast often go on sale. I love the tenderloins and will get them and cut up some pork chops. I love pork roast and sauerkraut They call it the other white meat and usually there is not enough fat for me to fry them. I have to add some oil. Chicken and turkey are better for us than red meat anyway. And I eat a lot of chicken.They say the price of meat is only going to be going up and I have a budget to live with so I don't think one will be n my future for quite awhile. Glad to hear all kittens are present and Stormy has moved them to the house. There is hope now. Good she knows where home is.

Yeay for all Stormy's kids being accounted for! I'm so happy!

Ya, the price of beef is becoming absurd. Just yesterday I paid $5/lb. for ground chuck … gotta stop using it so liberally. Tom's purchased a couple roasts we still have frozen, as well as two Smithfield garlic and black pepper pork tenderloins. So far, we've had great luck doing them in the slow cooker with little more than unsalted beef broth and carrots. I don't want to sound like a conspiracy theorist, but think it's strange how all of a sudden, plant-based burgers came to be vogue right before skyrocketing beef prices.

AFter following all the problems that ranchers and farmers are facing, it is no surprise that costs are going up. Like you, we buy considering prices. Cooking in our slow cooker is a big help. We like to buy the boneless country ribs. Just a few make 2 + meals. We like the pork ones best. Cook up more tender.

Stormy feels safe with you and to keep kittens at your garage.

"Our plans are to travel as long as our health allows." Good thoughts.

You were brave picking a pork roast out and cooking it.
Glad Stormy came over to your house with the kitties.
It is hard to believe the cost of beef!
Whenever I seem to want something - it is always expensive! lol

The price of meat has gone through the roof. Even before COVID, we’d increased the number of meatless meals. We’ve gotten used to it.

Funny thing is I was thinking about “wilted lettuce” yesterday as I was making salads. I have heard of that but never tried it but for some reason it was crossing my mind.
Glad to see all the little kittens are safe. They are nosey and will get into everything. They will poop everywhere too so go ahead and put out some kitty litter. Haha. Also make sure they are all accounted for before you crank the mower or start the car. I have chopped a few tails before in a car motor.
Wonder why Stormy is being skittish. Does she not remember where her love is coming from?