When you spill the paint, paint the floor 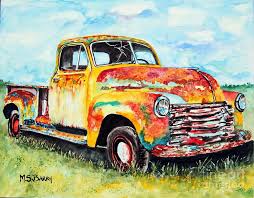 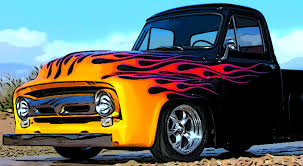 Do you have old paint around the house? Part of a gallon you used 5 years ago. The environment doesn’t want us to throw it away so that it ends up in the city dump. The earth thinks paint stinks, it cries,  ‘don’t pour it on me, paint something!!’

We have a man that lives a few houses from us. He has had two 5Gal. paint cans out by the road for over a month. I have yet to see a good chance to ask him about it. Just yesterday coming back from Lowes I realized I am too late, he now is using the two buckets of paint to hold his mail box. LOL.

When JJr heard I wanted old paint he said, “I have a lot of old paint.”  I asked him to bring it down. I needed to paint the block in the basement to make a moisture barrier. So I started painting, when I got to the floor, I just continues painting the concrete floor. 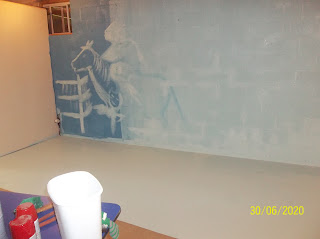 I didn’t realize how much brighter the basement would be. There was a nearly a full gallon of a pretty blue, the block soaks up paint so I added two part-buckets of one light green the other white. Then I started to do a mural but gave up the idea. LOL It did brighten up things.

It does brighten up things!! Pretty colors too! I think we have a few gallons of unused paint here ourselves. We'll have to figure out a way to use it up indeed!

Hey that was pretty and it lightened it up - you should do a mural. What a great idea here.

WELL said Jack!! I always say waste not, want not. Make do with what you have ! Looks Great !

My parents would say "waste not, want not!". Today is such a disposable world. Good advice and your basement does like bright and I am sure you both are happy with the results! THat mailbox holder- oh boy! Heeheehee!

OH all the possibilities of using old paints. Your doing good.
A mural would be cool.