Memorable Trucks from The Past: 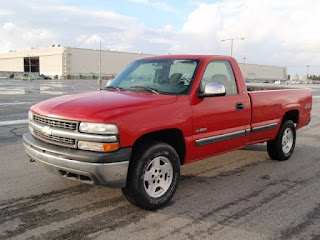 Note of clarification on trail dogs. Most of the dogs hiking with their owners carry their own foods and water using the small dog saddle packs. About the Smokys. There are private kennels and shuttles for dogs at both ends of the 85-100 mile trek thru the Smokys. It is a big inconvenience to the people who enjoy hiking with their dogs.

The real oddity to this rule is that horses are allowed on the first 15-20 miles of the Smoky trail.  It was an agreement that the AT organizers had to compromise (accept) because that part was always a horse trail. On our first hike Sherry & I met two horse riders. We were in a spot with no convenient way to move so we were in a VERY tight spot and one horse was very 'spooky.' The other reason I have heard is that very early it was learned that the dog scent attracts bears. There is a large population of them in the Smokys, and could cause a danger to the hiker.

We did encounter Bears at least 3 times on our hike. One, the  first night in Georgia. None were a danger. BTW WE were in our early 60s when we grew this wild hiking hair.

I am smiling now because once 3 Mt. Goats got between Sherry and me (Sherry being in front). We continued, Sherry was a little uncomfortable with one pretty close to her butt. We could still talk. I said “I am glad you are not wearing red!”  Having heard all my life that cows, sheep and goats did not like red. I am still not sure if that is true or not. LOL Anyway we continued about 100 yards and they just leaped off the trail into the bushes. 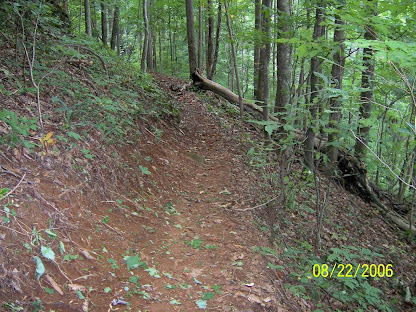 Much of the  trail is just like this, a nice walk in the woods.

Back to our first attempt at back packing. WE studied a lot and found what we needed to carry. Experienced hikers insisted all packs should be less than 40 lbs, preferably 35 for male and 30 for the female hiker. We were never able to reach that limit I had a little more than 40 and Sherry around 35.

I cannot remember how many, but I know we crossed some huge dams. This was Watauga lake Dam 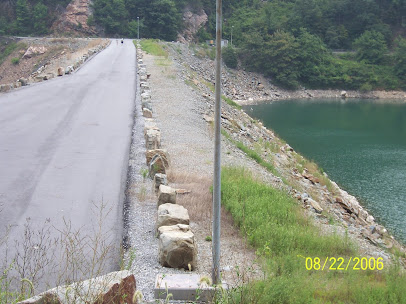 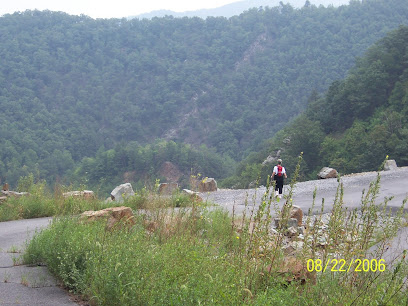 Sherry was a head of me onto the Dam.

I had only ‘backpacked’ in the USMC and Sherry had never. I ran the figures and decided We could average about 16 miles a day.  I thought we should give us and our packs an over night test on the AT. Looking at the maps we had we found a spot we could walk 12-18 miles and be back close to where we started, strange coincidence, that stretch was at Standing Indian.  WE were off.

PS: Mev asked about video of the trail, I am sure there are some clips, but I haven't heard of one covering most of it.

We watched that movie tonight. It was sort of interesting I am not Robert Redford's biggest fan. Nick Nolte was OLD!
What an interesting trip in your 60's! So cool.

Sixteen miles a day seems like a lot but I guess if you break it down to like eight hours of hiking it is 2 miles an hour and that seems doable! Wonder if the riders of the horses pick up after their horses :)

Hiking like that with bears and heavy packt sounds very exhausting to me. You two are very adventurous people, but not for me. I don't think I could even pick up a 35 lb. pack, let alone carry it for miles. Still it must be exciting for you getting ready to do it again. Good luck!

Thanks for these explanations! (Tho' I'm feeling foolish, realizing how ridiculously long a video would be.) That's interesting about wearing the color red. I'm going to try and remember to do that next time we visit Jackson Lake Island (aka, 'goat island.'). Not to be mean, but we wouldn't have to fight them for our picnic lunch. 😋