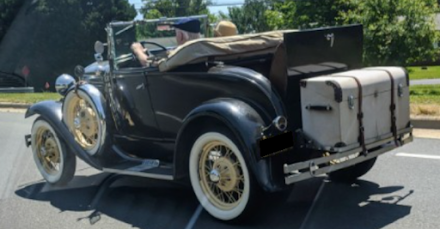 Grandson Josh sent me this awhile back '31 Ford Convertible
For today:

WE will be on the road after this is published.  Thursday we will be headed to our home base in Belmont, NC. Belmont is Sherry’s home town, she was born on the Climax Mill village and grew up on the Imperial Mill Village. Coming into Belmont on US74 you cross the Catawba River Bridge. At one time it was considered a large bridge, it is now a ‘tight’ 4 lanes and OLD. Looking both ways you see two more bridges, one is I-85 and the other is a RR Trestle. I don’t know why it isn’t a RR Bridge.  But it has memories for men 60-100 years of age.  During that period swimming in the river was the highlight of the summer. Diving and jumping off the RR Trestle was the height of masculinity. The river bridge on 74 has another infamous reason. Many who wanted a beer and lived in Belmont walked the little 2’ area, marked with a white line on one side of the long bridge to get a beer at the 6 or 8 bars on the Eastern shore. Needless to say returning after a few, was dangerous. (Now we are ‘uptown,’ even have our own breweries!)

Bridges seem to conjure up many feelings. Some romantic, some of dread and many the feeling of FEAR. Our good friend Judy who lived in a town called Milbridge, hated bridges, especially if they rose to enough height for ships to go under, as along the coast lines. BUT she fought that fear every year to come to Florida. When we lived in Biloxi, Miss there was a bridge going over Back Bay that threw a fear into Sherry. We lived just at the end of it and had to cross it for work, church and groceries. Her greatest fear was being on it when the draw bridge opened for a ship or shrimp boat. Having to sit on the bridge and wait (forever) to get off of it.

I don’t think she has that fear anymore. WE cross some big bridges on I-95, the biggest will be on the 95 bypass.  It is a beautiful bridge, it looks like the twin of the Skyway Bridge near Tampa. WE have had the pleasure of going over it and under the Skyway. It is a beauty. 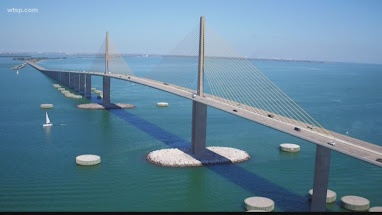 We have driven the Golden Gate and many other bridges. Bridges are just more enjoyable in our Class A motor home. Because of the height we see so much more of the bays and rivers.

What about this bridge in China???

Do you have an opinion on bridges?  Love or hate them?

No way am I doing that bridge in China!! I'm not a fan of bridges but realize they are a necessity to get some place especially if the bridge is over a big body of water and it is a high bridge. I am always thankful when I am off the bridge :)

I have a fear of bridges. That bridge you are talking about going from Belmont to Charlotte, is the worst. The lanes are too small so I always ride center the two. The cars behind me can just excuse me.
I am like Sherry. Draw bridges throw a fear in me just looking at them. I also have many dreaded dreams that include bridges being out half way. Scares me to death.

I've never been on a bridge that frightened me, but one of the ones we crossed was being refloored and you could see right through it to the river. You had to stay on the tracks they had to provide to get over it. I was very glad when we came to the end of it. Wishing you a pleasant and safe journey back to N.C. It's always good to get back home.

I don't recall ever being leery of bridges until the Sunshine Skyway disaster. We weren't living in Florida yet, but had occasion to use the remaining tressle during one of the area's famous thunderstorms. I wasn't certain we were going to fall, but that thought crossed my mind.

Like Betty said, there's NO WAY I'd drive that bridge in China.

Bridges aren’t my favorite, I remember as a child, Daddy rode me down in the country on one of my older brothers motorcycle. I guess we run out of gas because he had to push it over an old wooden bridge. I walked behind in the very center of the bridge, I was afraid of falling off. No rails or such on those old wooden bridges. Luckily there was a house with a barn and gas pump across from it where he was able to get some gas. Take care, Sheila