Our first evening dinner with a crowd. 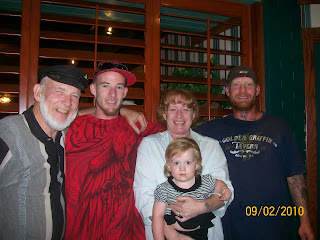 We went out to eat last night, NO Elsie did not make it. But above is Carol holding Allura Lynn.
Me, Ben, Carol (holding Alura) and Corey! 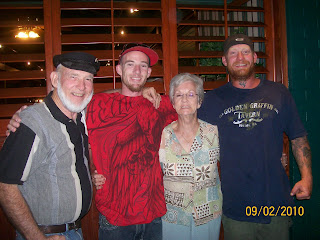 Me, Ben, Sherry and Corey. (Grandsons) 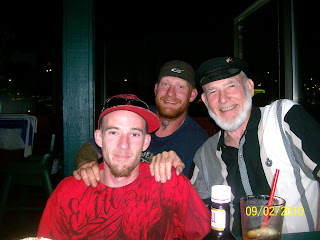 Ben Corey and the good looking guy is me. hahahahaa! 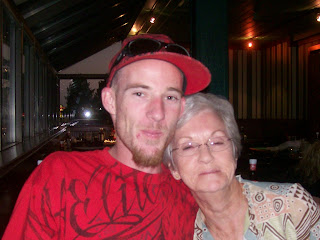 Grandma where she likes it, with a big grandson Ben. 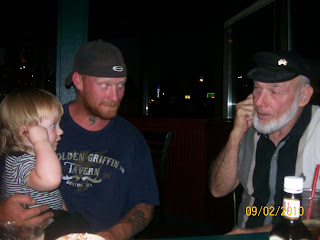 Now I am losing my touch. When the grand kids were little and tended to hang with Sherry, I would say just wait when they get old enough I will buy them. It works on every one, that is everyone except girls. It was hard to bribe Reece and now no matter how many gold dollars I pulled out of Allura's ear, I never got a hug nor kiss. Sherry got both! 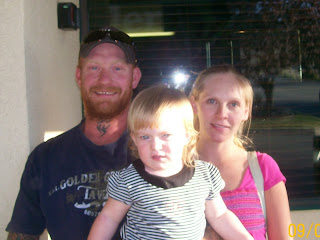 This is Corey the oldest and Allura Lynn along with his friend Jackie.
Tonight we see Elsie Mae. Will report later.
We are having a great time we had lunch with Carol today.
Thansk for coming this way,
Nite Shipslog
PS:
--------
What happens when you throw a clock out the window?
Time flies
--------
What did the astronauts say about their experience on the moon?
It was out of this world.
Posted by jack69 at 7:49 PM

Looks like only happiness. May time and life continue to treat them kind. A good weekend for you all.

Looks like you had a grand time there! Any time spent with family is great!

glad you got a chance to visit with part of the family; looked like everyone was enjoying themselves!!

Jack, which one of the children's children are these? It really looks like you had a wonderful time with them all. I know they loved having you two around. BTW - Did you know Ben favors you?

Fred,
Corey and Carol came into our lives when Corey was about four. He was the cutest little red-haeded boy. He had silver caps on his front teeth, cute as a button and smart as a whip. Ben is jack Jr's firstborn. The GGdaughter Allura Lynn is Corey's daughter. She is very sweet, took to Sherry but ignored me.

We did see Elsie last night and I did get to hold her, she is not as shy as Allura. Elsie is Ben's firstborn. Of course she is sweet and pretty like me and Ben. hahahahaha.
Yeah I am proud of the fact that Ben looks a lot like me and Jack Jr. Ben is also smart like me. LOL