There is a lesson here somewhere 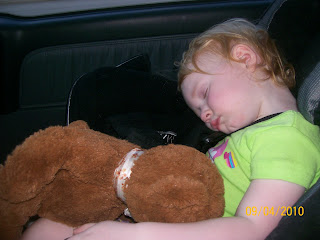 I just had to replay Elsie crashing with her dad crashing below. 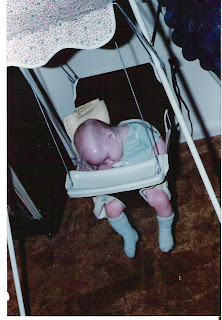 I received orders to Guantanamo Bay, Cuba (GITMO) while in the USN. Arriving I was assigned a room in the old wooden barracks. I was more used to open bay living. I still think that is the best way for military folk to live, but that is not the subject here. It was late by the time I got in the room. There was no one else ASSIGNED to my little room, but I was with my division, who shared the adjoining rooms Everyone was gone. About 2am I was woke up by a guy named Paul Hess. He welcomed me aboard and offered me some ‘Coconut Chicken’. I accepted it in my daze and tasted it, it was delicious. The division had been to a party and the hostess had cooked this delicious chicken. He misunderstood my name, and I became ‘Jack Daniels’ to him for the next year.
The next evening Paul came into my room and I was cleaning the screens. They were covered with lint, you could hardly see thru them. His admonishment when he came into the room, ‘You’ll be sorry’.

The boys, Jack & Mark on their moto cross bikes in our yard on GITMO. We waited two or three months before Sherry & the boys could come down. 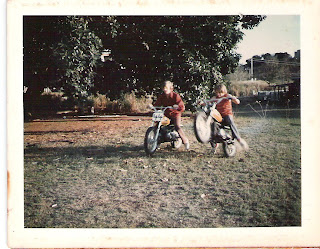 Me and Jack on left. A friend and Mark on the right. This is the spot on Gitmo bay that Columbus landed on one of his adventures. 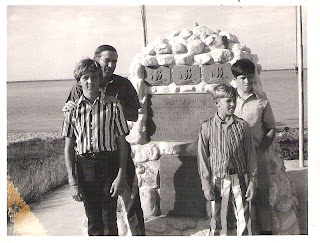 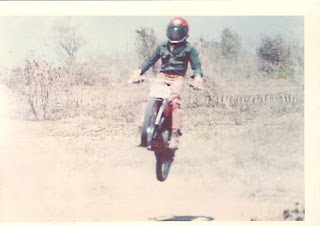 I left the screens half cleaned.
He explained that the Cubans were burning the sugar cane to prepare for harvest. And the ‘no see ‘ums’ headed for the base. I know now, but I did not then what a ‘no see’um ‘ is. The lint made it impossible for the little biting bugs to get in. So I determined then, ‘YOUCAN BE TOO CLEAN’.
I HAVE USED THIS EXCUSE (REASON) many times since then on Sherry, but it seldom works.
So if you live around ‘no see’ums or black flies’ don’t clean your screens!!!
Thanks for coming by the log.
Nite Shipslog
PS:
Today is our last day in Utah. In the morning we head to Idaho after a great time here. Tomorrow I will post the last of pictures from Utah.
I WILL TAKE THE CAMERA, I WILL TAKE THE CAMERA, IWILL TAKE THE CAMERA ETC ETC
Posted by jack69 at 2:03 PM

hi jack those photos of the baby girl tells something it's like if she could only complain then she might say..."put me in the crib and feed me lol!" just to make you laugh...its 3am here and wish you a nice and safe travel always....

takecare you and sherry!

You're supposed to clean screens?

Thanks for your lesson today. Sleeping babies are wonderful and no I don't clean the screens anymore. Thankfully there are no sugar cane fields that I know of in Ohio either. Have a safe trip to Idaho...I've never been there either. It's always great to see your pictures whether they are past or present.

interesting about the bugs/screens, I bet the whole place was an interesting place to live and I bet you guys have great memories from it. how cute with the sleeping babies; always amazes me that they can fall asleep anywhere in the most awkward positions (kind of like dogs, LOL)

Thanks Jack for the info on the screens, now I won't feel so guilty if I dont get them cleaned this fall. We have pleanty of those little buggaboos and they absolutely love my husband. He says that's because they must all be female. LOL
Thanks again for sharing your stories, I'm loving it. Safe travels and hello to Sherry.

The first time John's sister from Alaska talked about "no see ums" I thought it was a joke. Had
never heard of them or seen them. Elsie Mae and her dad can do some serious sleeping, huh?

Taking the batteries while failing to take the camera - sounds like Murphy struck again! You write great stories here on the blog and I love reading them. I can understand about the "no see-ums" as we have plenty of them here in the mountains during the early part of hunting season. I have a head-net for that purpose but usually forget to take it with me. Ahhhrrrrrgh!

Brings back memories of boys and their motor cross bikes. They were good at riding the hills and jumping. Elsie Mae called it a night she
played hard and now time for sleep and another
busy day with G Grandpa and Grandma. I know
you have enjoyed your time with the family.