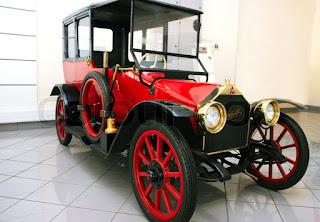 1917 Mitsubishi Model A
I always pictured Detroit as the only auto manufacturer in the world. I thought it would be interesting to see other countries entries into the Car market!

I have held this over a year, just for fun. (Not original by BY any means) But Here is my Idaho entry if I had continued the states as I once planned:  ….   …………
A Girl Potato and Boy Potato had eyes for each other, And finally they got married, and had a little sweet Potato, which they Called 'Yam.'
Of course, they wanted the best for Yam.
When it was time, they told her about the facts Of life.
They warned her about going
Out and getting Half-baked, so she wouldn't get accidentally mashed, and
Get a bad name for herself like 'Hot Potato,' and End up with a bunch of tater tots
Yam said not to worry, no Spud would get
Her into the sack and make a rotten potato out of her!

But, on the other hand she wouldn't stay home and become a Couch Potato either
She would get plenty of exercise so as not to be skinny like her shoestring cousins.
When she went off to Europe,
Mr. & Mrs. Potato told Yam to watch out
For the hard-boiled guys from Ireland and the greasy guys from France called the French fries. And When she went out West, to
Watch out for the Indians so she wouldn't get scalloped..

Yam said she would stay on the straight and
Narrow and wouldn't associate with
Those high class Yukon Golds, or the ones from the other side of the tracks who advertise their trade on all
The trucks that say,
'Frito Lay.'
Mr. & Mrs. Potato sent Yam to Idaho P.U. (that's Potato University) so that when she graduated she'd really be in the Chips.
But in spite of all they did for
Her, one-day Yam came home
And announced she was
Going to marry Tom Brokaw.
Tom Brokaw?

Thanks for the morning laugh!!! This was a cute one!

This is great, Jack. Some people are so creative!

Hahaha. This was cute!

As an Idahoan for the last 9 years, this made me laugh!!!

Yes, thanks for laugh! We all need some laughter in our lives and starting the day off with a smile is a very good thing! When you think about it, there certainly are a lot of different kinds of taters in life!

This was so worth the year long wait......as potato raisers for years, we were called Mr and Mrs Taterhead.....loved this. Thanks for the chuckles.
Have a great Easter weekend my friends.
love n' hugs from up north where it's gorgeous outside...finally! Life is good!