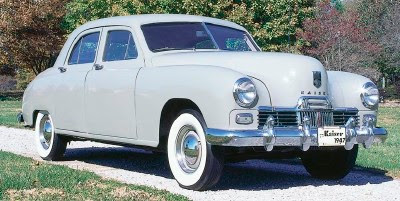 Junior owned one of these 1947  Kaisers same color. He must have like Navy Grey!

If there is a Junior in a family it is normally the first born son.  (Someone should break that pattern and name a girl Jr; has that ever been done?   i.e. Mary Jane Jr.)

It was odd in our family the second born boy was named Jr, born April 28, 1925. Jun was a great guy and at the top of the list of my heroes. He joined the USN when he was 17. They tell me when we moved to Shelby I was 3 years old, it was our first house with an inside toilet. I talked so much he threatened to flush me down the commode. 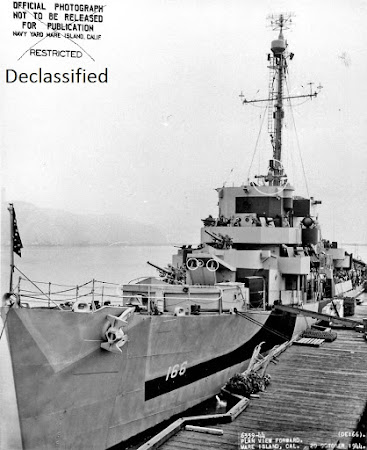 After Boot Camp and he was sent across the USA to a new Destroyer Escort the USS Baron DE-166 As a Gunners mate. I told him once that we had visited North Platte Nebraska and learned they had fed most of the troops crossing the country by train, free. 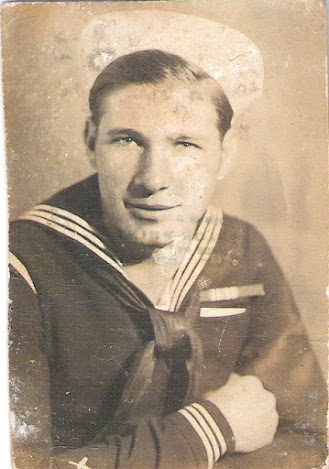 “Yeah Jackie, I remember North Platte. That was the first place I started to buy a beer. All I had was a $20 bill. The waitress saw that and said, if you just want one beer that will be 50 cents. I will have to give you 19 silver dollars in change.”

Jun said, “19 silver dollars would pull my pants off.”

When I said that she winked, “It would pull mine off too!”

“I didn’t get the beer but hurried back to the train. I had never heard anything like that. After all daddy was a Holiness Preacher.” LOL

He was discharged At the end of WWII. I will never forget seeing him on a motorcycle letting rolls of toilet paper unroll in the air as he rode and blew that little horn..

After the war my brothers, sister and their in law kin bought land and built houses after working in the mill all day. Junior was known for saying if they sat around talking too long, “OK boys let’s get to work and do something, even if it is wrong!” None of them had built before.

Jun was destined to be his own boss. While working in the mill, Junior tried to start a printing business. Printing business cards, invitations etc, He had one of those OLD printing presses where you set the type; you had to read backwards to make sure it printed forward. That one did not work out.

June and Mo had two boys, Ted & Joe, I only have a kid's  picture of Joe the youngest in my file. 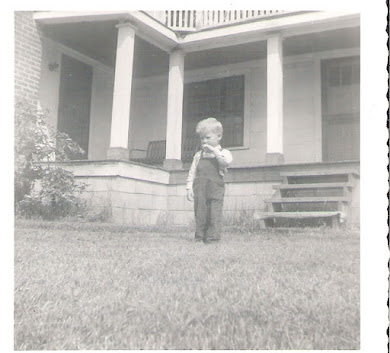 I think it's wonderful that you know so much about your family history. I know names but that is about it and very little else about them. It's good you write it all out for others to see. I only have one nephew that is a Junior. Each of my own boys has a different name from their father, he didn't want a Jr. to follow them. But I did give one of them the same middle name as their dad had and another has their father's name as a middle name. Keeping the name in the family anyway.

What a handsome man, your brother! I love when you share family stories like this. That's funny about the 19 silver dollars.

I'm not a junior, exactly. Rather, my parents transposed mother's first and middle names: Evelyn Myra. For a long time I used to think they had no imagination whatsoever. Ha!

My hubby is a Jr. My son Jack is the III! Poor kid! He almost was a Jason but at the last minute we went with the III. I love the name Jack. Nice solid, strong name!

Bill's oldest son is a Jr. A lot of our family names show up as middle names and some, first names. I wanted to name our youngest after his grandpa, but my cousin's son was born a couple weeks before him and she named her son after my Dad. My great grandmother's sister,(on mom's side), had 11 boys that made up the Newell Brothers Baseball team,SD, the only all brother team in the world at the time, in the early 1900's. Their picture hangs in the Baseball Hall of Fame. The brothers also had 5 sisters. That's the extent of news in print in our family but it's still pride worthy. Quite the celebratory end of WWII. !
loven'hugs from up north where the rain is breaking up the last of the frost in the ground. The creek is overflowing.

No juniors but being the youngest two, and me the only girl, I have Mom’s middle name Jean and Shawn has Grover as his first name. Love from up the road, Sheila

No Jr.s in my family but I do have a cousin that names her baby girl “James” after her grandfather.