Mamma and her baby? and Your last warning!!! 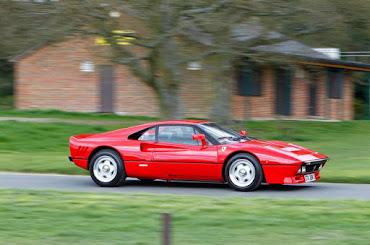 I associate this shape shells only with the beach areas. Most snail shells I see are this: 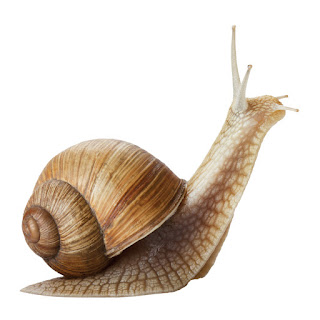 I had this great idea when I found these two snails. I think I will try to make pets out of these. They are cute, so I looked the care and feeding of snails. 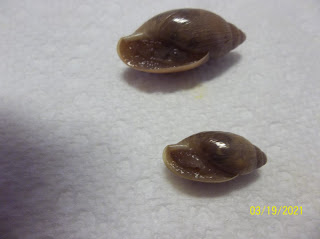 Could it be a mama and her baby? 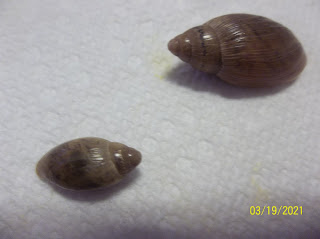 The large one is 1" only. Sherry says her sister called them Olives.

When it said they were no trouble, I read on. Ah ha, they require water, but NOT tap water, it will kill them. They require spring water, I don’t have that and am not that interested. I did see some snails for sale and some can be expensive.

Then I saw this African dude on the net, and learned something, snails can be BIG! LOL 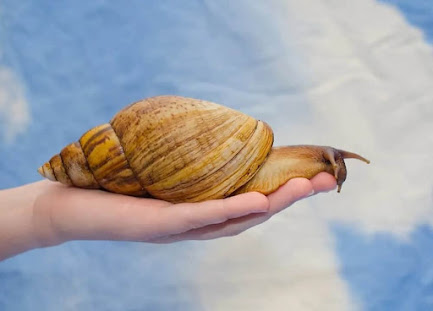 Now, forget snails, This could be YOUR LAST WARNING! your car warrantee IS about to expire?

I have had so many last warnings from mysterious phone calls and e-mails that it scares me.  Maybe one day I will get a ‘LAST WARNING’, I’ll laugh and find out too late, OUCH, IT WAS REAL!

Some of this ‘today’s cyber world’ does concern me.  Sherry just took a call that said her Social Security Card had been suspended due to suspicious activity. I immediately asked if she had been running around on me, It has finally happened after over 64 years of marriage. LOL That is suspicious activity, but in our 80s?  ;-)

I laugh at that but honestly how can they get away with it? I know their phone # is blocked so it cannot be traced, but the phone company can locate ‘computer generated calls,’ the one Sherry took probably went to thousands, maybe a million.

This cyber stuff is scary for seniors just trying to see their grandkids via the internet. There are many instances where people have sent e-mails to the wrong person, (Especially seniors, I am guilty!!!) . I also talked to one lady who said something ‘CRITICAL’ of another and accidentally sent the e-mail to the dude.

BTW: This is my dog bit wrist after 4-5 weeks I am surprised how fast an old man healed. And it never hurt after I left the hospital. 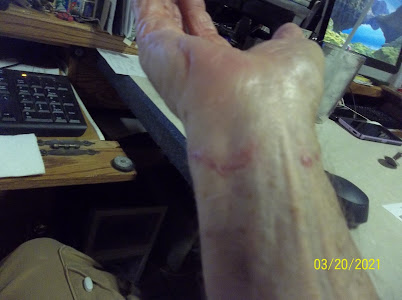 Wow that is some impressive healing on that dog bite. And it never hurt? You're a healthy dude. Good for you!

Nope. I do not like snails.
Glad to see your dog bites are healing up quick and without suffering.

WE used to have snails in a fish tank and it was interesting seeing them crawl up the sides of the tank. Otherwise though, I wouldn't want to eat them. I'v had plenty of those last warning emails too. It's hard to believe they waste the paper and time to send them out, but I supposed some are more gullible than I am. I final them promptly in the recycle basket. I don't think there'd ever be a time Sherry would take it upon herself to deceive you. You have nothing to worry about there! You two are my favorite couple for a reason.
Lovs and hugs from a warm and sunny Ohio. Spring has arrived in all it's glory!

Looks like your wrist healed nicely ! Thankfully it wasn't worse !! Snails up here are called "Slugs" ! They invade your garden and destroy plants, to get rid of them you take a coffee Saucer and fill it with Beer, set in garden an in morning it is full of dead slugs, repeat process for several days then every other week !! It is warming up slowly at a "Snail's Pace" !!! You 2 take care, sending down warm thoughts to you an Sherry !!!!! love, Gary an Anna Mae

Your wrist looks great! (Whew!)
The only snails I've paid attention to were those sauteed and served in garlic-ky butter. Not so sure I'd enjoy the process of preparing them, tho.
Sad how these con artists are becoming more crafty. If only they'd use those 'smarts' towards an honorable pursuit. My heart goes out to those folks who've been suckered.

Don't snails leave slime trails? Yuck. Anyway, I'm glad your wrist is healed nicely. Good thing dog's mouths are cleaner than humans...or so the saying goes! I got the same phone call about my SS#...hang up! Have a good Sunday! We have had a beautiful weekend with sun and warmer temps. Take care!

Very good news on the healing of oyure wrist. Snails.....I don;'t know if it would be a good pet. They are huge, some of them, must have a great diet! The hackers and scammers and spammers.....it is a daily ritual. I have leanred to use my voice as if I am a robo call myself. Hahaha I pick up the phone and hit them with a recording.....they usually do not call back. when my great grandboy Harrison was an infant and toddler I watched him two days a week and we would play the song "We're Not Going to Take it Anymore" by Twisted Sister, into the phone. He would crack up laughing with me. It is a great song to use if you can have it ready when your phone rings.

Snails trails are slimy ~ not the best pets tho ~ we had hermit crabs years ago ~ interesting how they carry their shells around on their backs ~ as Woody said, feed them beer in your garden so they don't destroy your tomatoes ~ it does work. Yes, the telemarketers, scammers, etc, are very annoying ~ we hang up too.
loven'hugs from up north where Andy made delicious maple syrup over the weekend. It was such a nice way to spend a couple days with the grandloves too

I like the valuable information you provide. Pay a visit this write my essay in 3 hours web site. I am quite sure I'll learn plenty of new stuff right here!

The only snails I keep up with are escargot. I'm not sure they'd be pets for me. Enjoyed visiting your blog.