The first BIG decision of my life 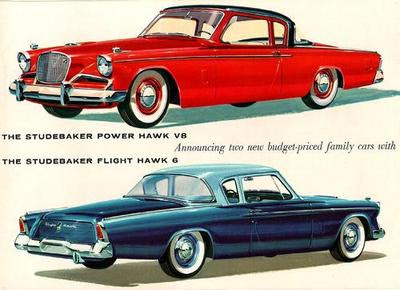 These 1956 Studebakers were new when I made my first grownup decision.

Remember when you were sure you were grown? Time to make a big decision that would affect the rest of your life? You had been allowed to pick some clothing and most of the shoes you wore. Most of us (but not all) could pick the hair style you wanted. There were times you could look at a $5, $10 or even a $20 bill and decide what to do with it. Fairly big decisions at the time.

In my area of the country when you reached 16 you could quit school if you wanted to. Kids in our area knew IF they quit it was leave home or get a job, sometimes both. If you worked and remained under the parent’s roof, you were expected to contribute to the weekly grocery bills, etc.

I had decided that I was wasting my time at school, so when I turned 16, I quit school. I had met this beautiful girl and I wanted to marry her.  Yeah, I was smart enough to know I needed money and a job & ‘stuff’. LOL

I had a friend name Sammy Waters. He had joined the military under age and had been kicked out. So he told me how it was done. I made it to the swearing-in and then I was caught. I had to return to school ‘cause my daddy said so.’

But I knew I would join at 17 and I did. Dad gave in and signed for me.

I was thrilled, I was going to be a Marine. I made it thru the swearing in, I joined with 8 other guys, we were ecstatic, until we reached Parris Island, South Carolina.

There was no ‘backing out, no backing up’ I had finally made a decision of a grown up, but I learned very quickly I wasn’t grown up. 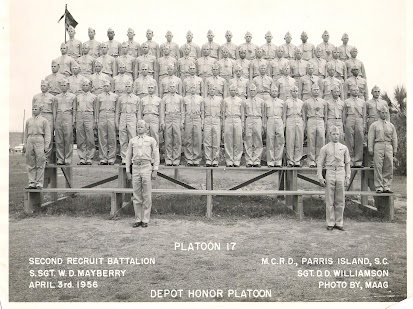 WE had to pay to send our civilian clothes home. They shaved my head, I had to pay 50 cents for that. (it was taken out of my pay).

My Drill Instructor, SSGT. Mayberry, said he would be my mama and daddy. He would make a man out of me, if it killed me. OUCH.

Yes, I did lay in my rack at nights and hope I would wake up to mama’s cooking and this all would be a bad nightmare.

It took a while, but I did grow up some. LOL

Why am I writing this? WE are overnighting here in SC before heading on to Florida. Just down the road is the place of my first AWAKENING to the REAL World of grownups. Where orders are given and OBEYED; where you do not question authority as you might that of a teacher or parent. THIS WAS REAL. It was PARRIS ISLAND. lol

PS: Most people make the first BIG decision right after HS or graduating from College.

I'd remember well, the day I took a bus to another smallish town, to go to a tech school to become an elementary teacher. I also remember how small I felt and that I was still in elementary school. Mom said I had to follow thru and I'd become the best teacher I could be. It was terrifying to me. It was my first time away from my family, weeks at a time until I could take the bus back up north. As a very shy child myself, my interests fizzled until I was back home waitressing, hostessing at, at the time, was the best known supper club in the area. I made good money until, finally, I was more prepared to strike out on my own. Life threw many curves. This time I made it as a great teacher, mentor to my own kids, which was the hardest education I ever received. Life.......I've lived it and loved it with the help of my parents.
loven'hugs from up north, today's home of sunshine and lollipops ~ ~ ~

Ir ian'r easy growing up and making those big decisions. Thankfully, looking back, I made some wise ones. Good to hear you are on your way to Florida. It used to be the thing to do, joining the military instead of going on to college or higher education. Not many could afford it back in the day and every one learned some valuable tools to use on the jobs of the future. My DDH wanted to learn electronics and joined the Air Force. He got certification and it led to a career leader on. My first big decision was in marrying him. I couldn't have done better. Safe travels as you continue on your way! Spring is already there and I wish you well.

Ya, I've heard about Parris Island. Not somewhere I'd even dream of going! When my son was on the fast-track to flunking out of college, my mother had finally had enough and closed her purse strings. Having no other choice he joined the Army and was sent to Desert Storm. Later he confided, that was the best thing that ever happened to him; it made him a man.

PS - Will you tell us which one in this photo is you? And why isn't anyone smiling? So many military images, everyone looks all grumpy-pants. (LOL)

I think my first big decision was to buy a brand new Pontiac Fierro when I was 20. Daddy had to co-sign and I regret that I let him down because I didn't keep the payments up. Needless to say, he took it from me.
I dont usually have many “big” decisions as I am quick to jump on things before I really think it through. Now if I’m in search for a pair of shoes? That can be a big decision for me to make.

Well. Big decisions. I enjoyed reading this story and the comments from others, too!

I remember thinking I had made a big decision when I joined the Safety Patrol! And when I became a paper boy. And when I decided to try out for a play in high school.

Then... I had to choose which college to attend, and at the same time I decided who I wanted to marry. Half way through my freshman year of college we did get married. Still are. Just celebrated our 47th anniversary this past December.

Made a passel of big decisions since then, too. Not all of 'em turned out so great. But I certainly can't (won't) complain. I'm still kickin'. Taking early morning walks with my son and his dog. Good stuff.