Have you noticed? Gas is going up!

Around here Diesel Fuel is $4.05 a gallon and Reg. gas is headed up, now at $3.70.  I have not been much at government regulations, but I think it is time to regulate the price of gas.

I understand that people in other countries are paying more, but they should regulate also. And NO, of course I do not know the inner workings of the Oil industry, but having had two successful small businesses, I know profit and loss statements. The Oil industries made an increase of 46% to 72% last quarter of last year. meaning billions were made.

I also know that means many folk USA folk who invested in oil made some good profits. but I also know that a trucker who fills his tanks at $550 each, must pass that cost on to us, the consumer, or he will go broke. There are more consumers who must drive to work and cut down on their own groceries and other essentials.

From what I hear, gas will be $5 a gallon by July 4th holiday driving time. I sure hope not.

As we travel the roads of the USA, I see often on a tractor and trailer truck this fact, “If you use it, enjoy it, drink it and eat it, remember it came to you by TRUCK!” Now that is a fact, and if it costs the trucker more to get it there, it is gonna cost you more to buy it.

So, since I am not smart enough to understand it, somebody should be. I hope to see some good  explanations and reason coming from the White house and Congress SOON! This rise in Gas prices CAN be controlled, so…………SOMEBODY UP THERE DO IT!

Well I guess that solves that problem, hahahaha!

PS: I know you have been asked before, but

Why is bra singular, And panties plural? 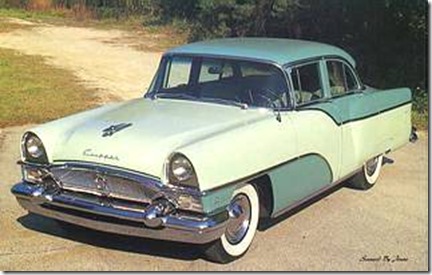 1955 Packard Clipper.. I knew a guy who was arrested for riding spread eagled on top of one like this as the car war driven thru J-ville, NC in April of 1956. It was a powerful car, on the base, they called it the TANK!

because it sounds cuter and more feminine to say "panties"...don't ya think?!!!! I rather like the UK way of calling them "knickers", I really like saying "don't get your knickers in a twist"

well good luck on the gas thing...when you get everybody straightened out let me know! I'll be looking for a price reduction at the gas tank (just filled up today...but I don't go into shock anymore like I used to)!

I am a capitalist, but even I sold my oil stocks a while back because I felt there were making it almost impossible for the "little man" to freaking drive his car. ~Mary

I know people who are having to chose between buying their medicines, their groceries or filling up the gas tank to get to work. SOMETHING must be done. take care.

I was hoping you could get them
straighten out so I wouldn't have
to go to Washington and introduce
those knuckle heads to real life.

I paid $3.66 this week. Remember
I want let my tank get lower than3/4 full because I fool myself thinking I am and not spending a lot on gas. LOL

Gas prices are driven by supply and demand, and also a function of refining capacity. In the states, oil companies have shut down refineries that are no longer profitable. In addition, with the sanctions against Iran, supply has dwindled. I do not think regulation will help, but all subsidies should be cut.

Ah! You've posted one of «Louis'» favorite cars, a Packard. The Packard Clipper was a mid-priced model that competed with Buick and Oldsmobile. The Packard Patrician (4 door sedan) and Packard Four Hundred (2 door hardtop) were Packard's luxury offerings for 1955 and 1956. The Clippers shared most of the Packard body panels, but were built on a 122" wheelbase while the "senior" Packards were built on a 127" wheelbase. In '55, the Clippers were powered by a 332 cubic inch V8 and the Patricians and Four Hundreds were powered by a 352 cubic inch V8. For '56, the Clippers got the 352 and the Packards got a 374. «Louis» can't see the car in your photo in enough detail to tell if it is the Super or Custom. The Custom was the top of the Clipper line.

When gas goes up we all pay for it in all the goods the truckers ship. It's nice you have the problem solved there. I'm glad I no longer use much. A tank of gas lasts a long time for me now that I've retired. I use more in the summer traveling back and forth from the camper than anything else. This summer I think I'll be able to stay longer at the camper than before so that will be less trips. I'm hoping so anyway.

The gas price makes me think about jumping in the truck and haunting the country roads like I like to do.

Jack, I just have to say this and it struck me funny how the thought of you running for president popped in my mind. When You said "I have had 2 successful businesses", Mitt Romney immediately came to mind cause that is what he is running on. I think you are as qualifid as any of the other ones running for president. I was almost afraid to tell you what popped in my mind, but I decided you were the type to take it as written. FUN