What is important to know?

I was following some questions asked High School students, and was shocked by the answers or lack of answers.

Is it important to know your own state’s history? I remember knowing there were 100 counties in NC and I had to know all their names. NC claims to have declared their independence from England before the Colonies did. The first manned flight was in NC, completed by the Wright brothers from Ohio. Is that important to know?

Is it important to know what countries border the USA? Or who was the first man to set foot on the Moon?

Is it important to know the Vice President’s name?  What about knowing how to determine the square root of a number?

Do we need to know about and remember the Alamo? What about the Maine? Do we need to remember Pearl harbor? Daniel Boone? Harper’s Ferry? 9/11?

You see, I do not know if we were taught insignificant facts, unnecessary for our personal and countries survival, or not. I remember reading somewhere that a child could get two credits for taking guitar lessons.  Now I think that is nice and a great idea (playing a guitar), I wish I could.  But does that deserve 2 credits toward a HS diploma? Equal to English or Math?

Did you Have homework? Was it necessary? It doesn’t seem so now.

Oh well, it is something that bothers me about YOUR countries future. I will not be around when these kids start running the country.

For some reason, I think that some small details are important for  well rounded leadership. BUT I do not know that for sure.

Thanks for reading a rant, from an old man.

****Your mate sleeps better on a lounge chair with the TV blaring then they do in bed. It's called their "pre-sleep."
**** Remember when your mother said "Wear clean underwear in case you GE T in an accident"? Now you bring clean underwear in case you HAVE an accident.
****You used to say, "I hope my kids GET married; now it's, "I hope my kids STAY married!"

I remember when boys wanted to crawl under the hood of a car, Now they prefer video games: 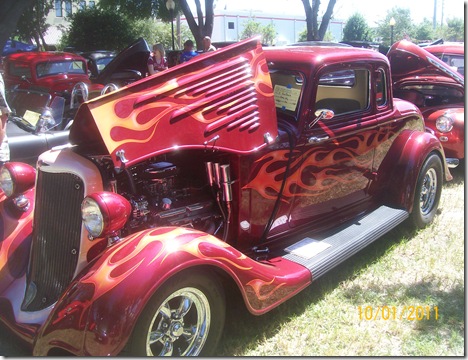 From under the hood they created what we called the ‘customized’ car. Like this 1932 Ford.

My son and DIL are going to pay the price to send their daughter to a private school, which teaches the basics! Now it's true that g'daughter has vision issues (20/200 OU) and other issues connected to being a premie, but she's OK in the brain department. I thinks kids need to learn the things you mentioned because it's our past...the foundation of our future. It's fine to be techno smart, as long as technology is used as a tool to assist! If civilization devolves and one day there is no electricity and no batteries...and you've learned nothing about the past, nothing about how to survive...nothing about how to use Mother Nature to assist...then what have we become, what will we become. I have those rant days too, I have a problem not with civilization as I know it coming to an end, but water, food and human beings coming to an end...and so much of it caused by our own folly and lack of responsibility!

My niece is almost twelve and this was the first year she got a report card. Her school system believes in positive reinforcement even if you have the wrong answer. I found that interesting and sad. Right is right and wrong is wrong. Our local TV Station took a film crew around town to see if folks knew their ROMAN NUMERALS. The older the respondents were the better they were at naming them. The younger folks had NO clue. They wanted to know WHY it mattered. Such is life. Take care.

I have several teachers in my family so I'm aware of what is being taught and what is not anymore. I'll say the most important thing a teacher can have is a parent that works with them. There is a lot more to know than when we were kids and a lot of times what they teach is what the kids have to know on the tests they take. The kids have to pass the tests as that is how the school is rated and often how the teacher is rated too. My own kids used to love playing trivial pursuit cause they learned a lot of things that they never learned in school. They just don't have the time to teach everything and parents need to help. Yep, kids do still have homework at least here anyway. You can tell this is a subject that is high on my list. I'd better quit for now while the quitting is good. It's a sunny day and even though I had my jacket and sweat pants on I spent a couple hours on the patio reading and soaking up the sun.

I hope my school is teaching more then they did when I was there. I'm sure I've said this before but here goes again--- The Superintendent's wife taught English three or my high school years. I use the word taught loosely as she would walk into the room and say get"get out your novels". The girls read all period and the boys pulled their chairs up around her desk and they all talked about football etc. I can give her credit for teaching me to love to read but where was the rest?

excellent mean to measure current time and life. with my son being four years old, i'll have to wonder about various such questions shortly.
i used to do homework for the math, german and english lessons.
please have you all a good new week ahead.

I think if you were to compare the grade expectations from 100 years ago to today, you would be amazed. I remember helping my kids with homework, and they were doing things in grade school I did in middle/high school.

Great question, that. What are the important things that are going to make a difference in the quality of life of the future of the students. I was not a good student in high school (altho I excelled in grammar school, finishing the 8th grade as second in my class) and barely passed "by the skin of my teeth" as the saying goes. Later, after being married and having a child I began to realize the need to know something about English Grammar if I was to be a good communicator. Going back to school later, taking correspondence, going to night school, and finally graduated from Seminary when I was 47 years old. My thing is that it's futile to teach a kid who has no heart for learning. Hmmm...come to think of it, it seems that may be somewhere in the book of Proverbs.

The private Schools are teaching
more things that reg. school.
It is a sad situation today in
our schools. Like you say we want
be around when this generations
runs the Country and they worried about our generations. LOL

I think the most outrageous ruling they have made, which Bush did, Was no child left behind. They passed the kids even if they were wrong. I do not know how to figure the square root of any number.But most all of those that you listed should be required. It was for me.

Wow, you certainly got me thinking about what we learned in school and what the children are learning today. hmmmmmmm!