Lindie, is it a dance?

Some may have noticed a few comments lately by Lindie.  She is my sweetheart, and yes, Sherry knows!

I have said it here before,  when I started a journal I never expected anyone to comment, I was writing for the fun of it and hoping the family would keep up with us on the road. I did get one comment as we were traveling thru Illinois with Colette and Sonny by our sides. It was from ‘Very Big Ears’. later found out it was my oldest Son.  Then one day, out of the blue I was notified ‘you have a comment’. It was from ‘Lindie’, saying, ‘I agree with you!’

Since then I have received random comments from her, and am very happy with each one. She has even read my books and rated them on Amazon. Of course I would think she is special. So today, just out of the blue I decided to search ‘Lindie’ on the net, I found the following Definition:

Lindie
An absolutely beautiful, charming girl. Her looks only being matched by her personality. She will often times be the most caring person you know.

I believe that fits her to a ‘T’. I would also add, ‘a bit mysterious’ ha!

I remember some of the comments, one from many years ago. Sherry and I were at the entrance to Cape Cod for our first time. We were so thrilled. WE were in a small Toyota Camper. Parked on a high hill over looking Buzzard’s Bay. Singing the chorus to Patti Page’s song, Old Cape Cod:

I mentioned that and Lindie commented: From where you were, you could see the area where many times I pushed our child in a stroller,that also carried our laundry, to the Laundromat, we were so poor back then.

I might have the comment a little wrong, but that was the gist of it. She is also a Missouri girl, you gotta love them.

Anyway, I just wanted to say thanks to everyone who takes the time to comment, and especially to Lindie who started it all and encouraged me as I typed.

Foreign aid might be defined as a transfer of money from poor people in rich countries to rich people in poor countries. 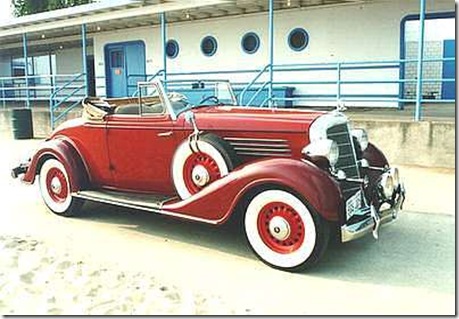 Lindie would have loved this 1934 Buick Roaster!

Nice tribute to your friend Lindie. Now they have me visiting from the United States. Well yes that is true. Blogger sure keeps me hopping when they change things like posting pictures on my header. Just when I get comfortable they change it. Don't they know I have work to do and here I sit.

lovely Lindie...and to never know when a fantastic comment will pop up!

I've got to say that now that song is going to be running through my head for a while. I hadn't heard it in ages, but the minute I started reading the words, the music popped right into my mind. It is wonderful to get comments . I know I journaled and blogged for quite a while before I ever got one. Same as you I started mine to keep in touch with family. I look forward to folks like you that write about each and every day too. Thank you for keeping in touch with all of us!

I am confused more than anyone in here, Paula. Jack as far as I am concerned this entry is one of the best and you have had a lot of really good ones.

It's always nice when people leave a comment and even nicer when they become a friend.

I have been very fortunate to meet nice people like you and Sherry, Paula and others who follow my journal.

As for "Old Cape Cod", I fell in love with that song many years ago and have performed it onstage many times.

That '34 Buick looks pretty sleek for its day!
;-D

Love that song by Anne Murray she
really sings wonderful

I think there was a dance they called the Lindie in the older days.

I LOVE the song and I LOVE CAPE COD. First commenters are special for sure. I'm glad Lindie inspired you to keep doing what you do, Jack. Take care.