My mama worked on a farm, dug peanuts, picked cotton, sewed and worked in a weave mill to assist in furnishing a life for her family. My older siblings were most born before or during the great depression. By the time I came along (1939) she was a  stay at home mama. Well, being a pastor’s wife, of course she had added responsibilities.  I learned later that is more a Southern expectation than other parts of the country.
There was a hot meal every morning, Usually one a noon (we called that dinner) and then supper.  some of you can remember, all the meals were from scratch. When she said we were having chicken, the chicken was still out in the chicken lot wearing feathers. Or  dad had brought it home with its legs tied. Daddy chose the chop block, mama just wrung the neck.
At 5 yrs old, at a country church dad pastored, I set rabbit boxes and we had rabbit. Sometimes dad would hunt with some of the members and bring in squirrel or rabbit. I loved both with mama’s gravy and those big biscuits. MMMMMM good.
Growing up, Shirl and I had our disagreements, but mostly we got along good. She taught me to ride a bike and play hop scotch. We did jump rope some.
I remember once at 4 or 5 I had a gold fish, it died. I buried it in water and one of mama’s pint jars. 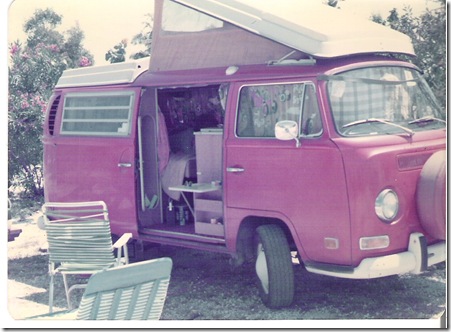 This was our first motor home, shucks we have always had class!!!
Once we pulled into my brothers place of business, my SIL Mozelle, quickly told every one working to keep an eye out for theft, some gypsies just pulled into the parking lot.
Posted by jack69 at 9:19 AM

Bottle trees are becoming popular again and many collect colorful bottles and display them in their gardens. I don't have one, never did but it's a great idea. How things have changed over the years. What was once useful is now a collectable. I feel like one of those collectables some days, but then I try to remind myself I can still be useful. To answer your question...I left the nest at 21. Hope you all have a fantastic Friday!!!

I have heard of bottle trees, just never have seen or had one. I have never had squirrel, but I am sure the way your mom cooked it, it was delicious! Those biscuits sound "heavenly". I left the nest at 22. Son left at 19, but came back at 19, left at 21, came back at 22. I think the next time he leaves, it will be "it". Each time he comes back wiser :)

have a good day!

Nope, never had or saw a bottle tree. That was my Grannie's kind of cooking. Big biscuits so a person never needed but one. I left the nest at 17, way to young.

Women worked so hard back then but I don't think there was so much paperwork to keep up with and stress. I left the nest at 19. I've seen the bottle trees decorating yards before but never had one myself.

I love to hear your story about when you grew up - I love hearing it and learning and remembering and comparing.

Hey you know - I have that bottle tree in my front yard. True.

Have a good day.

Great post!!! You could have been talking about my mom with the chicken. We had rabbit and squirrel. You can tell I am right up there with you on age, well maybe a little older. First Jat tree I have ever seen.