We could have done better

No matter what our station in life is, we could have done better. But we do not get a ‘Do Over’ in life. In every life there was a chance, a gamble that if we had taken, things would have been very different.

To those whose lives were put in turmoil because they chose the wrong guy or gal the first time around, life would have been different. However, when children came from the wrong choice, they were loved and cared for and most folk would take nothing in this world for them.

Occupations, some of us passed up great opportunities, because the results did not seem fast enough.

BE VERY CAREFUL,THIS GAME CAN BE PLAYED TOO MANY TIMES.

I have advised my boys, about life and its choices. However, advice is just advice, hopefully to be taken but the ‘advised’ also has the right to reject. AND THERE IS THE RUB.

I have told both my sons and I am very serious about that, “I told you so!” is the most hollow victory in the world. IT DOESENT CHANGE A THING. I have tried very hard to never say that.

Sherry and I have always had a practice of enjoying things when they were going well, because we knew from experience, in a little while “your world can (and most likely will) be turned upside down”.

Humans have the propensity to try and change minds, IT DOES NOT WORK. I don’t care how badly you want someone to change their mind, it seldom happens.

This has been attributed to many folk, but Abe Lincoln said it first I think: “He who is convinced against his will, thinks the same thing still.”

So we must live our lives, and do the best we can. We cannot, run other’s lives (Although we want to, especially if it is a son or daughter.)

PS:
You can become King, easier than you can change the past. 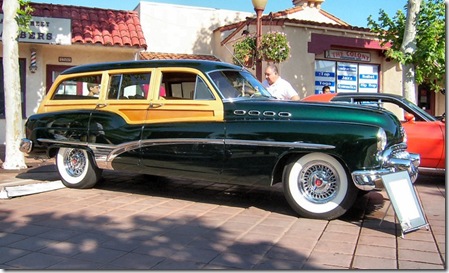 This is a 1950 Roadmaster Buick, Woodie.

I totally agree, you can't change the past and I'm sure we all wished we made better choices at certain times.

I think as the years go by, we all try harder to think clearly before making choices as we have learned from the past.

Hugs, to my favorite couple!

Strange how similar our posts are, in a way. Even if you think long and hard about things it does not turn out right after all. It seems that I was happy being the baby of a large family until at age 14 I thought , "I don't live on this farm the rest of my life." From then on I was searching for a different life. If I knew then what I know now, MAYBE, I may have avoided some mistakes I made, but ya know what,I probably would have made them anyway. I guess I can say I made some good choices to. I learned long ago do not interfere in your adult kids life, even if they ask, sometimes it is best to leave it alone.

So true...I've learned those lessons in life over and over again. I know you like that serenity prayer and believe me I say it often. Sometimes the one that needs changed is me...Believe it or not our part of Ohio is being influenced by the hurricane with rain and wind and they say it could get bad here with 50 mph winds. It isn't anything like what those that are having to evacuate their homes along the Atlantic coast though. Praying for all those in harms way today.

Wise for you and Sherry, Jack, to enjoy life when it is going well because we do all know that those times can be quickly changed in the opposite direction. It is also true about choices made and how we wish our "young ones" would but listen to us. I've said many "I told you so" in my head, LOL. I too try not to say those words out loud. I'm sure my mom probably had a lot of "I told you so" running through her head on choices us kids did, but in the end we all turn out somewhat okay right?

And you are right we must live our own lives and do the best we can and not try to live or run other's lives. Something I say a lot is "they are doing the best they can with what they have to work with". I hope I'm doing the same too!

Beautiful sunny day here in Southern California; hoping the East Coast is holding its own against the approaching storm.

Love the Buick the ones we had
gave good service. I see my
92 Roadmaster around town. I sure
the person we gave the Roadmaster
Station wagon to has been sold. They were good cars.

I think back and wish I would have
kept up with my music. I played the piano, organ, french horn, autoharp, keyboard and the drums.
Oh well don't need it now enjoying
retirement. Like you said can go back. Life go on.

Loved the P.S. - thank you for this thoughtful entry.


Please have you all a good new week ahead.

Good advice from Jack as always. One of my grandsons makes such bad choices some time and I want to tell him so then I read on Facebook he just paid off the brand new Mustang he bought a few years ago and then I'm proud.

Very good and very true advice Jack. So many times I wish I could tell my children what to do and make their life easier - but they wouldn't listen anyway. Seems you and Sherry thought things out well. sandie

WOW! A Roadmaster woodie is RARE! What a beaut!