When we were reaching the age of retirement and my sister Kat and her husband were too, we decided to build our homes together. Both were joined but split down the center by the deeds making them fall under Condo rules. There was plenty of room for two separate houses, but we opted to build together. Both families got together on the plans and added little things they preferred. Kat added a little breakfast bar, we liked it so we adapted that also.

The units were both 3 BR 2 Bath units, but both opted for combining two of the bedrooms to make one master bedroom suite. Anyway we lived beside each other for a few years and loved the association. They lived their lives and we ours. Then we decided to travel, they had a motor home as we did so we spent winters together also. Even drove to Alaska together.

Kat and Dick have passed on and now we own both sides.  Shirl now leases one unit. She always calls and asks if she can modify this or do that. We always say have at it, knowing all she does adds to the  place.

A couple days ago she found a cedar tree heart and had a brain storm. She wanted a small fence or lattice work at the house entrance. 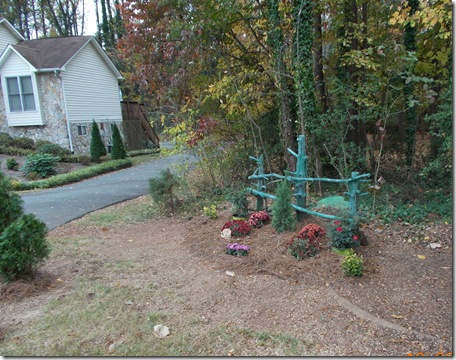 I helped her cut and stake it and them left. This is what she came up with, I think it is neat. 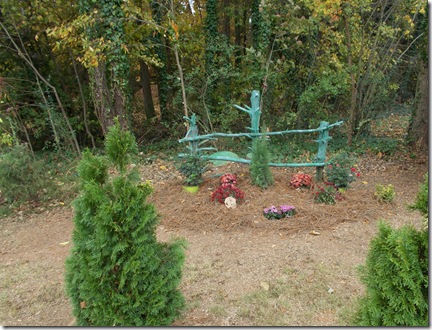 Sherry and I did live where Shirl lives now. That hill in the front yard was grass. Shirl was worried about cutting grass on the hill, so this is what she came up with. Looks good. 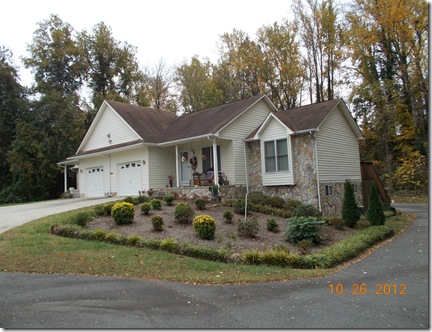 This is a view a little more to the right. Her wild area behind the house with seats and swing, birdbaths and feeders. This is in the city but does not look like it, it is very quiet and peaceful. 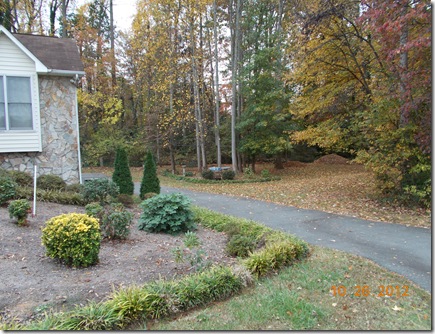 She has done a lot of work in the yard. But now the leaves are starting to fall. OUCH!

This is the time we are usually in Florida, although I do love to see the beautiful fall colors.

It is good to apologize for hasty words, but much better to think and hold them, rather than let them out. I believe Will rogers once said, “It is easier to let the cat out of the bag than put him back in!” 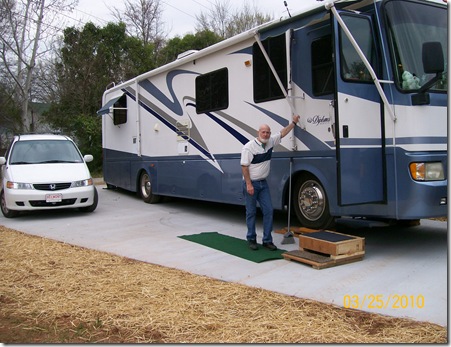 The final RV (so far) is this 38 1/2 foot, 2000 Monaco Diplomat. We have two slide outs and are enjoying it. This picture also shows out tow vehicle, 2004 Odyssey. The last towable Odyssey without altering it some.

Pretty house and pretty area. When I was growing up two brothers owned the feed store together. They built their houses connected by a common porch. I always thought that was a neat idea.

What a great idea to built your homes that way!


Please have you all a good Sunday.

Pictures turned out good. Smoky
said I charge for people wanted
pictures. LOL Hope we don't see them in a Home Magazine. I thought
the area turned out good.
Have had several compliments.

How cute to build like that those years ago, especially if everyone got along well with each other! I love the home now; it looks so cozy and inviting and welcoming! Love the land around it too, so wide opened!

The house and the grounds outside are very nice. No you'd never guess it was in town, it looks nice and secluded there. The fence turned out really good. All those things add character to a home. It's leaf time here too. Very windy here for a few days due to the influence of the hurricane they say...maybe they'll all blow away!

What a charming, lovely home and kept up so pretty. I love the fence.

Raking leaves is a chore!

Beautiful house - do you still own it - very pretty. Wish I had it - it would be a perfect set up here - for my daughter and grandson and
then Rick and I!

And you are right - it is better to think of words first before you say them.