How rich is RICH?

As a Civilian, Sailor and a Marine I have visited many ports of call outside the USA. The poorest being Haiti and Mexico. My heart is touched when kids  4-12 yrs old  are begging, selling trinkets or their mothers or sisters. I have always been an easy touch and have many time went back to the ship broke, giving to kids.  To them I (a low ranking  sailor) was rich. Relatively speaking I was.

Now in ALL countries you have the ultra rich and many the ultra poor. We have a right to be upset when the rich got that way by taking gifts by Advanced countries and putting it in their pockets. Or a dictator taking all the resources of the country as their own.

BUT do we have a right to be upset if a person inherited their money, or earned it by their ability and brain?

I participate on another forum. There is a guy I really like. He is thoughtful and in most cases,  not really rude. However he thinks the wealthy  should share their wealth (voluntarily or by law)with the us the unfortunate.

Questions come to mind, at what point should a person start sharing, at a $million, $100 million? And who decides?

Once you decide that, then who decides how much, how to do it and  with whom they share?

Of course I am not needing any of their help, but even when I was earning $70  month, I did not think I deserved a dime of Mr. Stowe or Mr. Lineburger’s money (They were the Rich folk in our town).

There are  selfish rich folk just like there are selfish poor folk. But did you know that most wealthy folk give more to charities than they would ever be taxed?The charities then handle the money much more efficiently than our government, so they do share, we just don’t hear about that as much.

There are 403 Billionaires in the USA. If you could change all their  assets (Homes stock etc) to money you would have 1.024 Trillion dollars. Folks we owe over 16 trillion right now.

Our  interest is $3.8 billion A DAY, so their TOTAL WEALTH will only pay 256 days of interest on the 16 trillion we owe. DO WE NEED to borrow more?

Sorry to rant again, I plan to do better.

Churchill said, Borrowing one’s self out of debt is like standing in a bucket and trying to pick it up!

Speaking of Churchill.DB18 Drophead Coupe about a 1939 Daimler Campaign car. 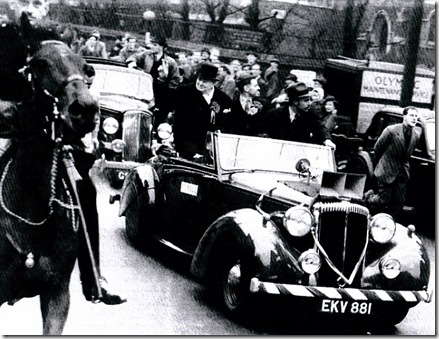 They do say that those to much as been given, should give much. But we know that that doesn't always happen for sure. I sometimes feel like the richest person in the world, but not with anything money can buy. Money is not everything, even though some act like it is. Hope you all have a terrific Tuesday!

Rant away, Jack! I usually agree with what you say, like I agree with what you said today. The wealthy earned it even if it was gotten to them by inheritance. A lot of wealthy people are generous people too. Why should they be forced to share it with others? I think the majority of us have the ability to be productive and make a good living (provided there are jobs out there). I do also think there is a majority of people who prefer not to be productive and want others to take care of their needs. The Bible says it really good, paraphrasing from one of the epistles. "if you don't work, you don't eat". Should be similar today. Of course there are those circumstances but it should be circumstances and not the norm. So I say let the wealthy choose what they do with their money and not be forced to give it away.

Do continue to rant!

I too have never thought the rich owe me anything. I could have been more aggressive in trying to make money. I've never felt jealous of people with larger houses or more "stuff". I say good for them.

Many things are a turn in the universe's roulette wheel, & other things are painfully earned or easily earned...or, oh it goes on & on. Resentment is a terrible thing, & I can happily say that although I have many flaws, that isn't one of them. I'm happy for the good others have & I don't expect any of it to be bestowed on me...I'm the one who likes to do the bestowing(when possible).

What I admire about you - is we all agree with you - you have the courage to say it.