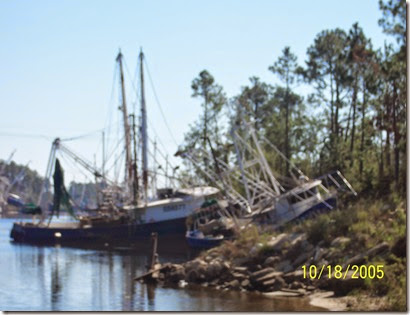 (The fishing business was devastated)

Sherry and I volunteered to work just a shot time in Pascagoula Mississippi after the devastation of Katrina. We met a wonderful couple that lived there and we were blessed by their love and compassion. I have lost their names, but that short time of fellowship will never be forgotten. 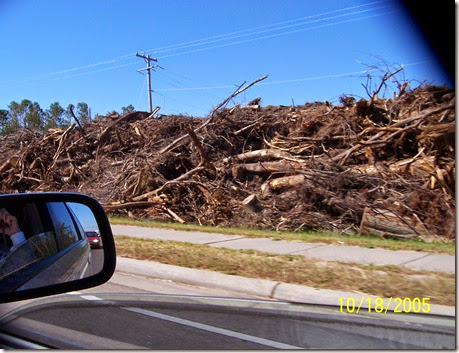 As I talk about this, I have no solutions, I just know the job of helping thousands in only one city to  relocate, would be a job beyond my comprehension. 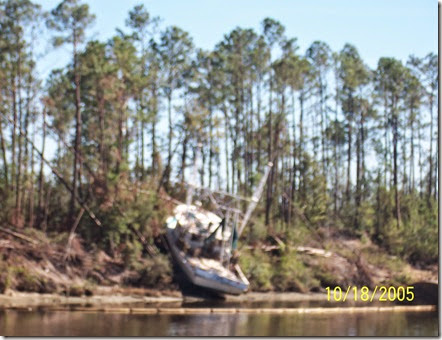 Folks were given money to move to cities in Florida. and many areas around. It seems every home within two or three miles of the beaches was flooded with 3-6 feet of water. Just think of arranging housing for every one within 4 blocks of where you live (Not counting you folks in the country now, just us city folk) 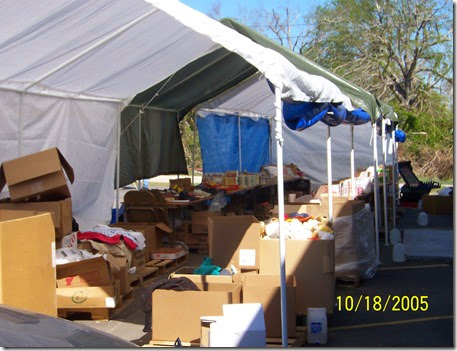 (The freebee tent, just walk thru and get what you need)

Now think of the volunteer workers coming in. Say you worked 5 hrs this morning, time for lunch, where are you gonna eat? You drive until you find a fast food place. The lines are long. You know why? The folks that worked here are gone, moved to Florida or somewhere. So managers hire anyone they can. Folks that have never taken an order or punched a cash register, much less made a Big Mac. 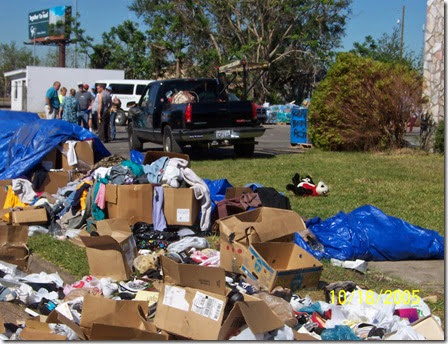 We ate at Waffle house once and the sweet young lady who was trying, could not fill out the order slip. She apologized, we laughed, she laughed and we finally got something to eat. 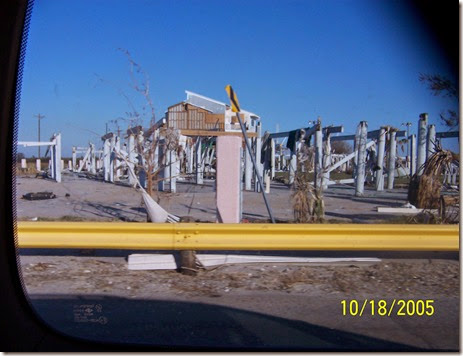 What is left of a housing development on the beach.

So, why not get sandwich stuff and make your own sandwiches. SAME PROBLEM Publix, Winn Dixie, Walmart don’t have enough employees. We talked to a man coming out of the store and he said if you are going in, be prepared to stand in line 2 hours.

Building materials ran low the first day, and managers were trying to teach new employees on the job, to serve.  Trucks of material came in but no one to unload them. Many volunteers ended up taking jobs just to serve the other volunteers. 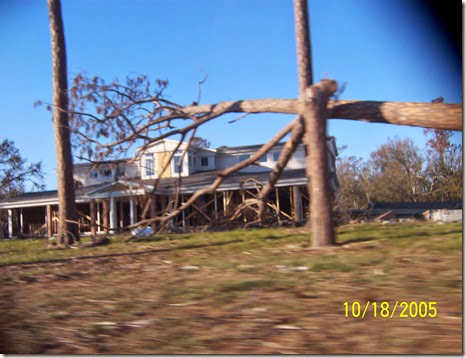 Imagine at the same time the government worker is fighting the traffic, dodging debris, to get somewhere to give out some more relief money. IT IS CHAOS.  I have laughed  at folks who said “IT COULD HAVE BEEN DONE BETTER”, IT WAS  the presidents fault, etc.

So what started this was me reading the news that some folk in NY and NJ  just received letters telling them they must return the relief money they were  GIVEN after Sandy hit. “IT HAS BEEN  RETROACTIVELY DECIDED YOU DID NOT QUALIFY!”  Now that one is Obama’s fault. 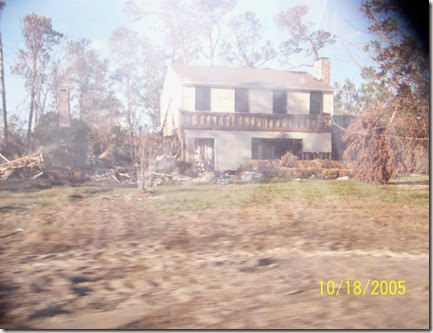 BALOGNA,   It was neither presidents fault, Getting help immediately to millions of people is IMPOSSIBLE. Getting help to them in a month is tough, unless you go around handing out money. And when enough complaints were heard, that is exactly what happened.

Sorry for another rambling rant. 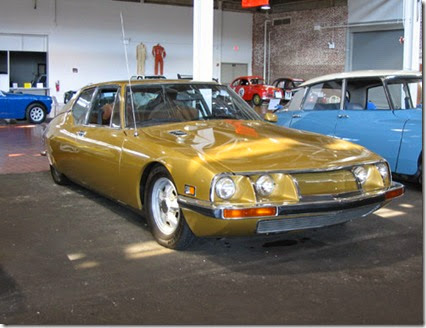 Such devastation. So many lives forever changed. It is a shame they are all being told they do not qualify. Something wrong with this picture.

It would be very upsetting to be told you have to give the money back. Most people have probably already spent it. Hurricanes are devastation and Katrina and Sandy did cause a lot of damage. I'm sure we'll still be feeing the trickle down effects for year.s.

I can't even imagine a scene like this. Must be a shock for the people to get notice they have to pay that money back.

I think it would be so hard to try to figure out how to re group after disasters like Katrina, earthquakes, etc. Those that make the effort should be commended and those that volunteer like you and Sherry also commended for willingness to help! I definitely would not be happy if I had to return money after the fact because I didn't qualify. Made you wonder why someone wouldn't qualify.

I am thankful I have not been
in a disaster that devastating.
After that much time has passed
to ask for the money back, it has
been spent...It would be sad to
loose everything you had worked
so hard for during your life time.

I can't begin to comprehend where to start! Ya, it's easy to point fingers ... but when you break things down to the nitty-gritty (as you've done here), answers are in short supply.

This retroactive business is plain (fill-in-the-blank). Scuze! I wonder how they plan to enforce it?

That storm was epic. The county seat where we live got a lot of people from down there just after the storm.
What's interesting is that many families chose to stay. We now have some amazing restaurants run by Katrina transplants.
I admire you both for volunteering.