Smokers can point to folks who smoked 1-3 packs a day and lived to be 95-101 yrs old (I did it). We all justify our actions and decisions. I remember a story I read once. A gentleman applied for a job as janitor at a large cathedral. He was turned down because he could neither read nor write.
Leaving the church he passed a fruit stand and bought a bag of apples. Before he reached home, he had sold some of them to pay for the bag.  The idea came to him about a rolling fruit stand. He checked around, seeing mobile hot dog stands but nothing with fruit. So being handy, he converted an old hand truck to a rolling stand and it was the beginning of a massive business of fresh fruits and veggies.
Thirty years later he went to the Cathedral to make a donation. He had always gave them the credit for his success. He had his check book and asked the secretary to write the check for $100,000.  He made his special x in the signature spot. The secretary asked him to wait while she got the Bishop.
In the conversation the subject of his inability to write came up.”Sir this is amazing, did you ever think what you would have been if you could write?”
“Yes sir, I have given it a lot of thought, if I could read and write I would be your janitor!”
So in education, I used that bull headed logic to quit school. I knew many successful people who did not have a HS education.  I was successful without it, but I KNOW I would have been better off had I finished high school and went to college. 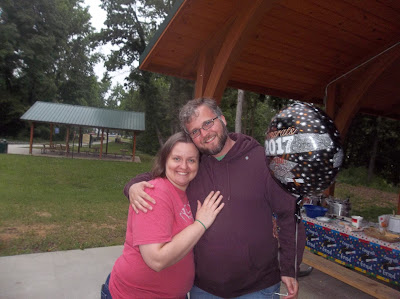 (Stephen and his wife Jennifer)
This afternoon we attended a graduation party in a local park for Grandson Stephen. His wife Jennifer did a great job with the party.

He is graduating from UNCC with a major in Music.  He is a fantastic musician and song writer.  Well not just songs, he writes Concertos, and sings Opera in 6 languages. He is a good guy. He is a twin to Joshua who is also a talented musician and a whiz at Computer Science, the field in which he is very successful.
Stephen graduated a few years behind his brother because he decided in the last quarter at Mars Hill College, to be a party animal. Now he has learned a hard lesson. It took over a year to reproduce what he would have completed in that quarter he ‘gave up’.  It has been tough but his wife has supported his efforts to work and go to school full time.  He is top in his class.
I was pretty smart in school, but ignorant to its importance, so I dropped out and headed for the military. My sister Shirl was the only high school grad in mom and dad’s family.
I tried to impress on my sons the importance of school, but it did not take. Both boys were very good in school.  We were very disappointed when they dropped out.
Nite Shipslog

I think you did okay for yourself Jack. Congratulations to your grandson. I have to tell you this since you were a Navy man. My daughter is in New Mexico right now for the college graduation of her step-son. He will go in to the Navy as an officer. She told me he wanted a silver dollar for the first person who salutes him. There are so many things I haven't heard of before. I can't even remember the name of his ship.

Congrats to Stephen! And special congrats that he realized he needed to complete his education, even if it took a bit longer than expected because of other choices he made in his life. Glad his wife was supportive too of his endeavors! Wow 6 languages with singing opera! I can't imagine! Wishing him success in whatever adventure life takes him on next.

Congratulations to your grandson Stephen. He is quite accomplished indeed. Some find success with school and others do not. Just depends.

Congrats to your grandson. How wonderful he could go back and get his degree. College isn't for everyone, it takes all kinds of people to make this world go round. I guess it's up to each of us to decide what's going to make us happy.

We had a nice party with congratulations to Stephens...Jack you are a genius
and both grandson's are also very smart...You never mention you did three
branches of services. Marines, Air Force and retire Navy that a life time.

I see your grandson followed grandpa's ways, from finding what makes you happy and going for it, no matter how long it takes. I cannot imagine singing opera let alone in 6 languages. That's simply amazing.
Blessings my friend from up north where the wind gently blows cold today.
We did manage to clean out a couple flower beds, plant onions and garlic, and Bill plowed the field while I made supper and lunch for the farm tomorrow.
Happy Mother's Day Sherry! love ya'll

What a good-looking couple!
I'm pretty sure it broke my parent's hearts when I quit college ... and swore I'd go back. 'Just never felt the pull, I guess.

Personally, I think passion for one's work far outweighs a sheepskin. (Well, unless one plans to perform surgery or put a man on Mars. LOL.)