Sherry often talks of folks she just assumes I know.  Where Our motor home is parked we are only a quarter mile from where she lived when we started dating, so a lot of her history is where we walk.
This shot is on the RR bridge Just past Scott Green's house. Sherry was in school with his brother and her dad married Scott's Grandma after Sherry's mama passed away. 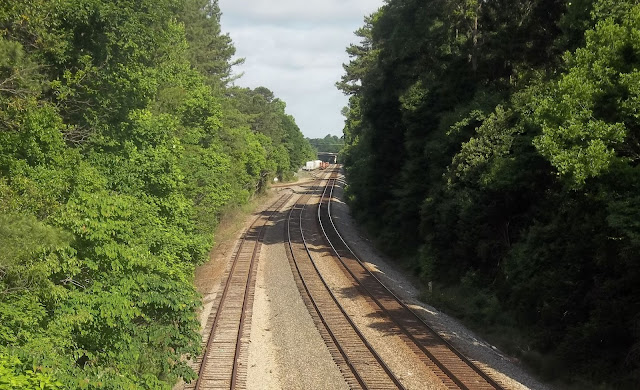 We will cross back across the RR tracks up at those white RR cars in the distance. 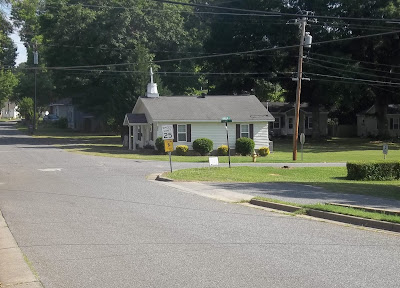 The church above was active when Sherry attended Bible School in the early 1940s.  She is the cutie on the far right.  Her brother Tommy far left and Johnny with his arms crossed a younger brother. 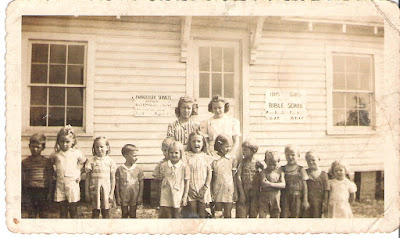 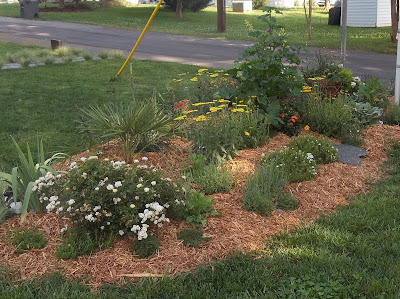 A pretty flower garden we pass. 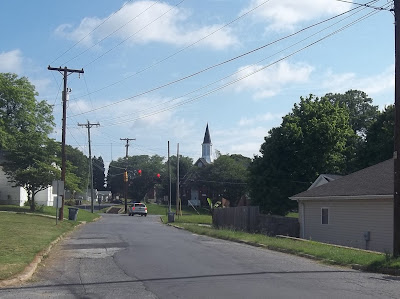 That steeple in the distance we see as we turn left. Is the church Sherry's dad attended. 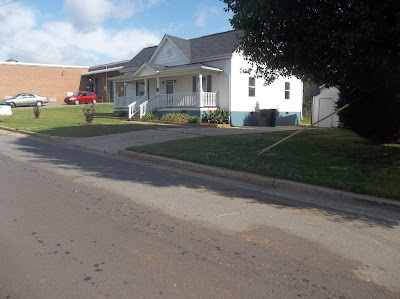 The above house is for sale, Sherry wanted it until she heard the price. LOL 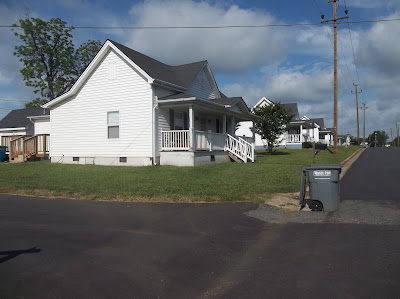 A short story about the above house. Sherry's Friend Reece lived there. Sherry reminded me I dropped her off here once and she was upset.  I had later that day asked Johnny, her brother (boy's talk), "What was Sherry pissed about?"  When Johnny told her, she said, "Jackie never said that!" Johnny had a big mouth! LOL We turned left and this bird was singing LOUD. 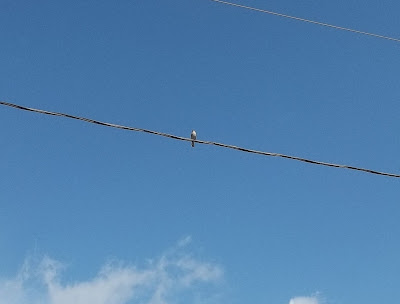 Below is a loading dock  of one of the many closed mills in Belmont. 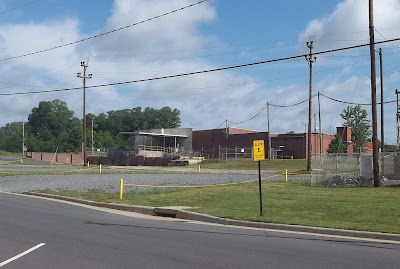 Most of the time we stop here for a break, toilet and water. Belmont Soccer fields. 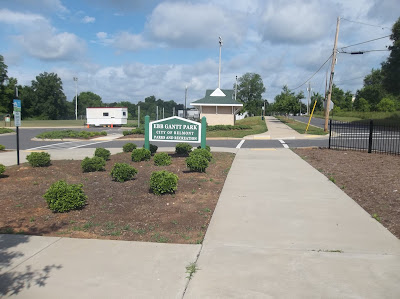 Just past the soccer fields we turn left on 'Chief Henson Dr.'. Remember Belmont was a small town. We bought our last house, where the coach is parked, from Chief Henson's family after he died. 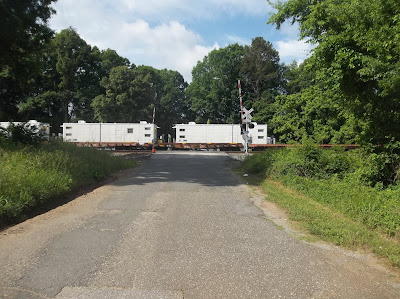 The RR has blocked this road  for three weeks.  Their transit workers live in these cars. 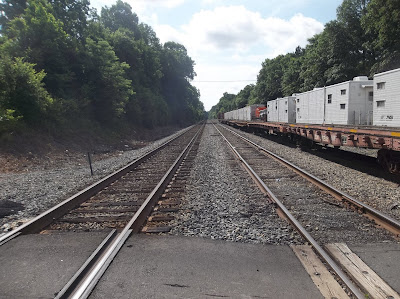 WE hve to walk about 300 feet up the tracks to get around them. (My girl is chicken to climb over or under!) 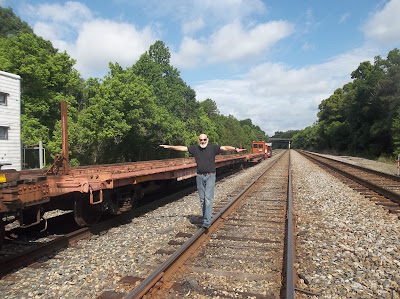 Here is another of Sherry's memories. That roof circled down in the hollar is where Sherry's grandma lived. Of course these roads weren't paved then. Here we turn right. and go around a curve. 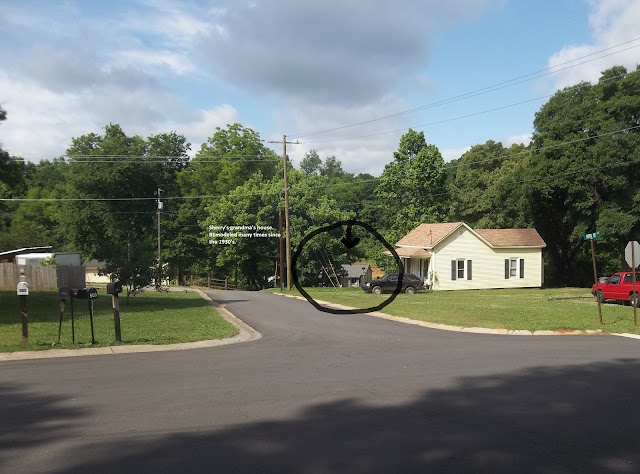 Around the curve is a gravel drive that goes down to Grandma's house. The road we are on did not exist then and this was only a path from Sherry's mill village through the woods beside the brook to grandmother's house. 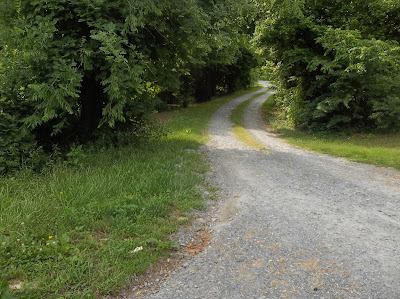 WE are up a very steep hill here, Sherry is proud she climbs the hill without stopping now. Below is where Sherry's brother Lefty lived and raised his family. 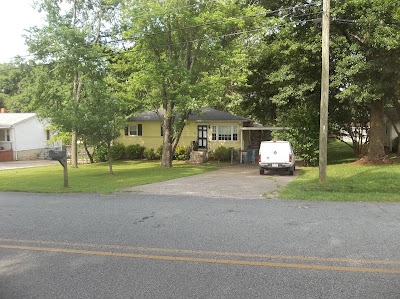 Now down the hill from Lefty's old house below is our house That belonged to Chief Henson. 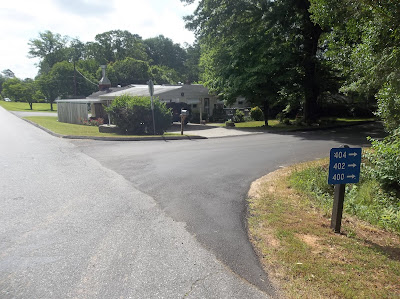 I told Sherry to walk on ahead, this is the start and end of our 3 mile walk. 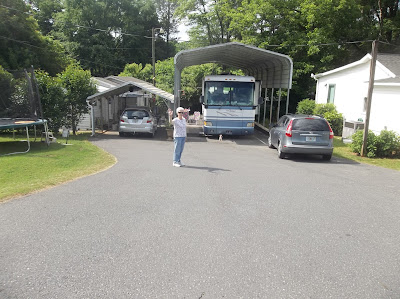 Belmont is no longer the little mill town. It is now a bedroom for Charlotte and a GROWING town. (My snake was gone today darn it, I was gonna bring it home.)
That Coach is ready to travel, but we must stay around for another graduation. Stella is graduating from NURSERY SCHOOL, I am not sure what her major was!!

Enjoyed every one of the photos and the nice walk. What ever Stella's major was it was important, maybe like picking up rocks. Kids are so cute at that age.

i enjoyed the tour of sherrys hometown. charming place indeed.

Wow, another graduate in the family!! I'm sure the graduation ceremony will be so cute! I always enjoy when you take us on your and Sherry's walk; what a nice town Sherry grew up in!

Your walk down memory lane is definitely a nice one. It's nice to be in familiar territory like that. Congrats to the happy little graduate! That is one ceremony you wouldn't want to miss!

Awww, Stella already a graduate. I LOVE the little grad celebrations. Not that long ago, we attended a few ourselves. You are blessed, Grandma and Grandpa.
I LOVED walking with you this morning. Belmont is a beautiful lil' town that I'd love to see someday. Everything about it screams, home sweet home.
Again, you are so blessed.
Huggin'love from up north where the temp dropped to 28 last night. brrr but already it's warming up. Have a wonderful weekend. Where will your coach take you next? Wherever it be, travel safe.

The pictures are beautiful. Belmont is a beautiful Historic Town. I found
that out working with Belmont Historic Society. Lots of wonderful people
live here and it is very friendly. We even know the mayor and I go to church with his daughter. History Day is this week-end.

I enjoyed the photo overload and the trip down memory lane. Those houses are all familar to me. I didnt live on that side of Belmont but I had friends (and boyfirends) that did. You are correct. Its growing up around there. I still want to visit the cotton candy factory. Maybe tomorrow Ill talk Nick into taking a drive that way.