You should love nature
I have friends, mostly on the internet, that seem to know the ‘proper names’ of plants. Some seem to be on a first name basis with the Fauna of their area. I hesitate to name them, but Dar and Mel come to mind up in the north woods (Wisconsin). Rick over in the back woods of Alabama, my friend Bonnie in eastern NC and Paula the Cowgirl in Texas. Then of course Glenda the Missouri Farm girl transplanted to Florida.

Just after I was blessed with Cochlear Implants Sherry and I were outside in our favorite place, the yard swing.  I casually asked, ‘what is that I am hearing?’

She looked at me like a cow looking at a new gate (dad’s expression). Those sounds are birds! I had actually forgotten the sounds of birds whistling and chirping.  Now we sit in the sing and I talk to the birds. I am pretty good at copying the sounds.  I wish I knew which I was ‘mocking’.  ANYWAY yesterday after our walk I kept hearing what sounded like a frantic bird call. I walked around the yard and could not locate it. Finally Sherry added her ears and we found the little Wren I think. Finally it quietened down. 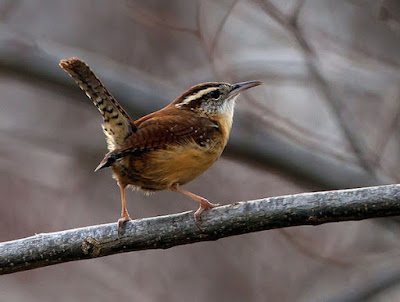 Back in the swing, Sherry thought she saw a snake crossing the drive and several birds squawking to beat the band. We went to investigate and saw a baby bird beside Mark’s truck. There were two Wrens, a Cardinal, and two large Thrashers. All screaming to high heavens and jumping around.  We didn’t see the snake, but what amazed me was the several other species all joining in to protect the baby.  I have seen many a baby bird on the ground and the mama keeping watch, but never different species joining to protect.  All of a sudden the little bird flew up to our chimney. Then the other birds departed except the Wrens that kept watch for the final flight to a roost. 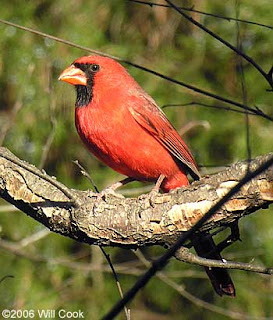 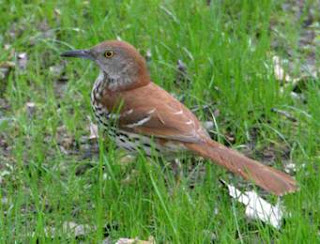 What a lesson for humans. Lend a hand where you can.  The little Wren alone could not scare off the snake, but with help and more pecking at the enemy, might have caused it to look for lunch somewhere else. My thinking went back to the first frantic cries, was she calling for help?

Sitting here I get to watch the birds and lizards. In Florida it is lizards, birds and squirrels.  It doesn’t take much to entertain me. I also learn something from nature at times and I smile. 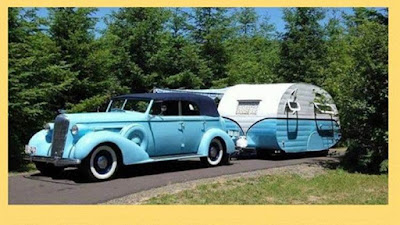 I like that expression "a cow looking at a new gate", I've never heard that one before. John said he hasn't heard it either.

That was neat to hear about the other birds helping when another family was in danger. Shows if they can get along, we should be able to get along with people who are different than us, but still people. We took a day trip today and was on a mountain road. We recognized a snake in the middle of the road; hubby thought it was a rattlesnake. We went around it, but not the person behind us. I guess that's part of life too.

What a wonderful story about the birds all coming together to help the baby. Looks like it really paid off.

Lots and lots to learn from nature and it never ceases to amaze me. Good story about the birds...flocking together!

Family ties, even among the birds, is a beautiful thing to see. Having gotten up in the middle of the night for my usual drink of water, I always go to the deck, turn on the light and check to see how much rain we got...this time I see the 4-armed bird feeder Eric made for us was on the ground, feeders all strewn about, seed everywhere, one feeder smashed....YEPPERS, a bear visited. By the size of his tracks, he was a yearling. Starting tonight, I'll be bringing our feeders inside til he gets the message of no more buffet at this place! I'm so delighted that you can hear the birds singing again. It's the one thing that I also loved hearing again when my hearing was restored. What a blessing.
Love n' hugs from up north........still raining with overflowing creek at the cabin

I always look around the house when I hear several birds in distress too. Then There is usually a snake somewhere when they do this. I can also tell when one has lost their baby. I seen this happen the other day. The baby could not fly. I actually petted it and the Mother bird told me right quick that it was not up for adoption. haha.

From the office chair.
Lisa