Digging up the past. 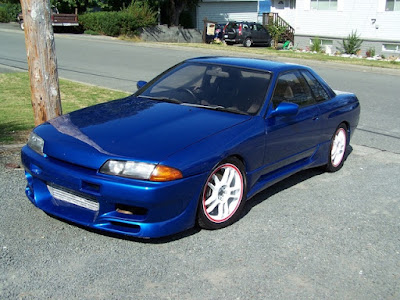 Now today:
I have heard that ‘Red Necks’ throw trash in the woods and dead end streets. But in my travels I think it was much more wide spread than the south. Anyway there are a couple dump sites here and  I have been excavating  to learn of our Belmont Past.
The area before I started the trail: 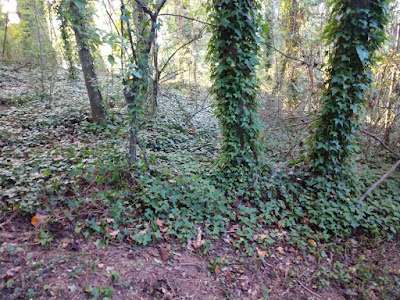 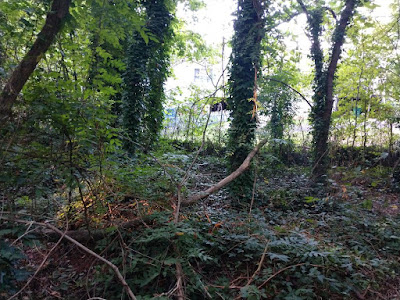 Once touring Williamsburg the guide told us that the scientist and archaeologist could learn more factual data about old Williamsburg by digging than looking at the written history, diaries and letters back home.  The guide went on to say people writing ‘embellish’ where buried facts do not lie.

I smiled at that, I would take someone’s diary who LIVED during a historical time as better facts than all the digging anyone can do, but that is a personal opinion.

Anyway, judging from what this archaeologist has found our little town’s forefathers not only worked in textiles but drank a lot of alcohol. When I hit a ‘nest of bottles’ 90% of them are liquor bottles, a few beer bottles and fewer medicine and food bottles. LOL

I have found one Valuable Cheerwine bottle, son Mark says it is valued at $26.  I found a Pepsi Bottle. This must be an antique because the bottom does not have the city of origin, but the patent #. In the 1940s the city of origin began being imprinted on the bottom.

I made some jar & bottle trees. The most interesting is Old milk bottles. They are like the ones delivered to our front door (1940s) with the neck full of cream. One is labeled “BILTMORE DAIRY- JERSEY MILK”. For you that might not know, the milk is from Jersey cows, not ‘Joerzy’ as in New Joerzy!


Nite Shipslog
Your Oxymoron for today:

It's true people leave behind a lot of history buried in the ground. Most people burned their trash but the bottles and jars would burn so they burrowed them. I didn't know about pepsi bottles having a city of origin on them. Interesting.now I'm going to have to take a look when I go to the store.. I worked at a pepsi plant my first job out of school and they never told me that. Course I was in the office not in the bottle works. Cleawring all that ground took a lot of work, hope you are enjoying it now.

Always interesting treasures that are buried; maybe that's why pirates kept looking for some! Its fascinating that the bottles are still preserved after all those years buried. Built sturdy I guess!

We've found many buried treasures/untreasures in around our property-some dating back to the late 1800's. It seems too that glass was made thicker way back when. Most of what we've found was insignificant.
loven'hugs from up north where the misery of Gout is a powerful pain in the big toe/foot right now.......not happy

I remember digging up an old CherrWine bottle. It was in perfect condition when I brought it out of the Earth but within 15 minutes the sun faded the label to white and it was not longer readable. It was like magic. I find a lot of marbles in the dirt for some reason. But of course, that was a game played often in the dirt.

Thanks for the pictures of your trail-to-be ~ I can't wait to see it come along!
Also, I've been meaning to tell that you guys have excellent taste in wreaths!!

That Williamsburg guide's observation is sure interesting! Like a time capsule, without the capsule. :)
Suppose our blogs will still be preserved online for hundreds of years?

That was quite a "find", love the old milk bottles. BTW Mark is really knowledgeable, he pointed out two Lance countertop containers that have "value". I need to list them on the Marketplace. I'd pay dearly to get him back down here. Miss y'all. Love and hugs from Chobee, Glenda

How do you know there is something to dig up? I would never ever have thought about digging. That was a great find - you ought to look up and see if any of them are valuable.