The Great Trapper or Me ‘n the Coon! 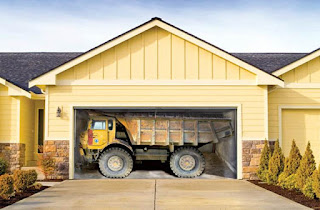 Don't you just love this garage door painting!
And so today:
Jim is a friend. He is a musician and a jack of many trades. He also traps animals and relocates them or calls the humane people.
As you know I have adopted a feral cat, I affectionately call ‘Stormy Daniels.’ I and my neighbor would feed her on our front porch. I kept missing food and checked with the trail camera. Well sir, Mr. Raccoon was visiting regularly. So I moved it inside the garage. Nothing changed. So I took a page from Jim’s book. I bought a ‘humane trap’, safe and FOOL PROOF they said, LOL. 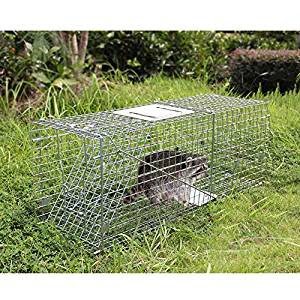 The first time the coon rolled the cage over and over until he released the catch and left. The next time one was caught in the door and worked his way out. The last time I braced the trap and caught Mr. Coon.
I checked about 4am and Stormy was there looking at Mr. Coon saying ‘you got him old man.'
(Mr Coon entering the trap)

I moved Mr. Coon to the basement. Get this. I had the end against the wall. I moved a 150lb generator to one site. A lawn mower to the other side trash can at the rear. I then covered the cage with a blanket and put a wheel barrow on top of it. This dude ain’t going NOWHERE! I stopped by to pet Stormy for a few minutes, then headed for bed. I removed my hearing devices and lay down contemplating what next.
I was suddenly awaken by my girl. I put my devices back in place and she said, “There are noises in the basement. I thought it was Mark, but his truck is not here.”
So to the basement to see a disaster. Glass stuff broken, shelves empty and on the floor, IMPOSSIBLE! I checked the trap, still in place as I left it. I had even zip tied the door as an extra precaution. ALL STILL IN PLACE locked tight but the coon was gone. Of course I opened the garage and told him where ever he was hiding, to get out, BUT leave this area or we would meet again!
To top it all he stopped to poop on the floor before he left, saying “Yeah right Jack, see you next time.” Well I knew Stormy was upstairs BUT Houdini had been downstairs. Imma reinforce that trap and get ready for a rematch. SHUCKS!
Nite Shipslog
PS: To Slim and Bill up in the North woods, don’t be laughing at the neophyte and his ‘dime’ trap.

Okay, I know(?) your intent wasn't to make me laugh out loud. But no, this has me near rolling on the floor in my 'church clothes.'
I'm looking forward to reading the next installment!

Sorry to hear he got away, hope you catch him soon, they can do a lot of damage. One used to raid the garden all the time. Always new when the corn turned ripe for eating too.

He knew, not new. Opss again!

Thanks for the great big smile and giggles ~

Question - what were you going to do with him? lol
We have something in our attic that we have been battling for months.

Couldn't help but laugh but to you it wasn't funny. Just how did he get out? Take care, Jean.

Wow, those raccoons are really escape artists! Houdini is an appropriate name. A fun post!

This sort of country gal wants to know why you put him in the basement? I would have taken him out to the country and said bye bye..but, I'm sure you had a plan and so did Rory Raccoon! Our neighbors have chickens and that attracts the coons and fox but cat food is another attraction..so watch out! It did make me laugh to read your adventure however! Good luck!

OMGOSH!!!! What an adventure!!!!! We had them in the grandparent's attic one time- a family of them and it was a nightmare to get them out of there. Even animal control had a terrible time ferreting them out. I think there were 3 or 4 babies up there,too.

Hope you beat the rascal at his own game next time. Hugs- Diana

Now that is interesting. I can’t imagine how he/she got out.
Put some Sardines in there. They can’t resist those.
R

A raccoon Harry Houdani! Whoever would have thought! Our next door neighbor once where we lived trapped squirrels as he didn't like them eating the food set out for birds. He never truly did get rid of the problem.

I think you have more than one and they have fingers and hands. They are smart and sneaky little critters.

Rick thought he had a raccoon pulling off his oranges. Set a trap at night. First thing he caught was a black cat, I let it out the next morning. It was not happy. Then he caught a gray tabby, I let it out. Not quite as angry as the first one. Then he caught a possum, I made sure it was in the shade while I researched whether we should let it go or not, I let it go. So the plant nursery guy told Rick it was a squirrel, to put a couple of fake snakes in the tree and move them every day. So far we haven’t lost anymore. I thought I might catch a little stray I’ve been trying to feed but no only two cats I haven’t seen before. Imma keep trying with the stray, you give me hope..😊 Love from Florida, Sheila