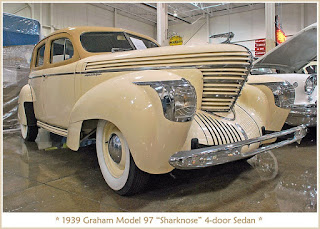 The 1939 Graham Sharknose
Now:
Evidently ‘window shopping’ has gone the way of the dinosaur. BUT I remember it very fondly. My dad pastored a country church in High Shoals, NC. The closest town was Lincolnton. To a 5 year old it was a city.
After mama’s Sunday dinner a few times dad needed some time outside with the family, so he would drive to Lincolnton, park the car and we would walk the streets. That was in the 1940s. ALL of the businesses closed on Sunday with only a few people on the streets. It was such a thrill to Shirley and me to look at the ‘store bought goods’ in the store windows. Mama called it window shopping.
Lincolnton has a center square and stores stretched a couple blocks on all four sides. It would probably take an hour to slowly walk the entire town both sides of the street,
Shirley liked the ladies clothes. Mama made hers. I liked the hardware stores but mostly I loved the Jewelry Stores. They were flashy, but they always had an eye catcher. A small electric train hauling rings and watches going all around and thru the window area. There was also a jewelry box with a little twirling dancer or two.
Usually I was running ahead, but I had to be called away from those windows. Funny how entertaining that was to a 5 year old. Shirley was about 8 at the time and we both couldn’t wait for dad to say we were going to town on Sunday afternoon and all the stores were closed. Yeah crazy I know.
Nite Shipslog
Your Oxymoron for today:

I still enjoy window shopping but not too many windows these days keep anything of value out there, especially jewelry stores. They take down all the expensive things as people might steal them. Sad, isn't it? I remember when the kids were young we would go to the mall to walk around and burn off some energy. We always enjoyed "window shopping" at the pet store.

Memories! My mother always spoke fondly of window shopping in downtown Minneapolis, particularly during the holidays when everything was so beautifully staged. Sad, so many cities downtowns aren't anyplace one would choose to hang out.

Window shopping was a thrill! When we lived in Ireland, stores were also closed on Sunday. After dinner, we would go to Cork City and walk around, exclaim at the store windows.
Good memories, good times.

I window shop now but it's on the internet! Not many stores in downtown areas. Except maybe the really big cities. I can remember walking downtown Chicago at Christmas time and being amazed at the beautiful displays at places like Marshall Fields. Our little downtown here in Ashland is trying to make a comeback. The Mayor is doing a great job of encouraging businesses and activities to bring folks back to the small town shops. He's calling it "Ashland on the Rise" and they're taking care of fixing up or tearing down old buildings and abandoned houses. Adding more parks, etc. Maybe some window shopping will be in the future again! Have a good weekend and after reading your previous post I was stunned that you climbed on a table, fell and escaped without a fracture! TSK, TSK!!! I work in surgery and I will say this again and again...ladders are evil and now I guess so are kitchen tables!

My great aunts had a little store with an ice cream/soda/fountain that was fun to go to maybe twice a year., usually in the summer. I remember seeing the days specials listed in the windows and ice cream cups, long handled spoons on display with checkered tablecloths. It was a fun place to sit on the tall swivel stools to reach the countertop. I was maybe 5 or 6. Window shopping too, was always fun, seeing what was being sold. Now days we don't see that anymore even in small towns. Sad.
loven'hugs from up north where the leaves are rapidly changing and the woods smell of fresh mushrooms everywhere. Oh my!