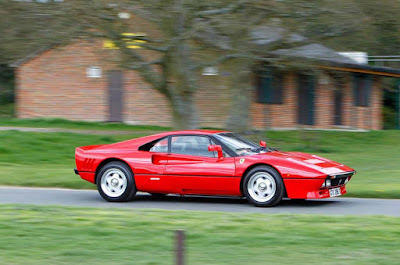 Preamble: Just wanted to thank you all for the comments on yesterday's entry. I truly enjoy and appreciate your comments.

Now for today....
Son Jack was telling me a few weeks ago that his clock had reset to all ‘0’s. He said the Sunday he noticed the clock was again working, but time was a few minutes off. He said he mentioned it to his son Josh about it not working for a long time and all of a sudden there it is again, and wondered why. Josh replied, “Dad, It’s time!”
Okay you had to be there I guess. LOL
BUT the night before we were to take this trip I went out to the motorhome and on impulse, checked the pump that gives us water going down the road. It was dead. Wonder of wonders I have one, a 12volt water pump, an exact swap out.  Two hours later we have an almost new pump installed.

Here is Rosemary with her grandpa. 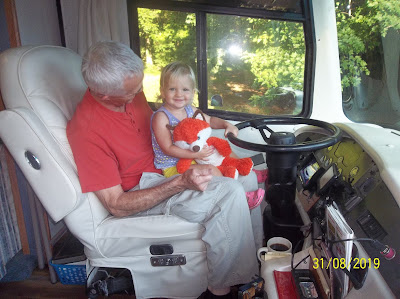 Later on the trip Rosemary was ready for a nap, Imma thinking grandpa was too! 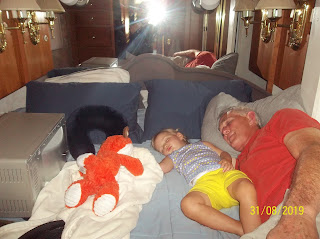 The gap for the road between NC & TN is pretty narrow, many times only room for 4 lanes and a small river. 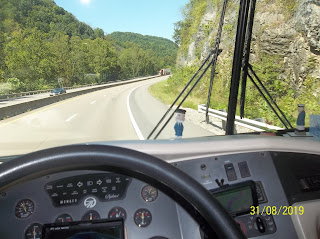 We were delayed about 1.5 hours for traffic and awaiting our breakfast. But all in all we had a great trip and had a good visit on the way.


Coming into Knoxville we stopped the coach and disconnected the tow vehicle. Jack Jr drove Josh, Meg, and Rosemary to the Bed & Breakfast they had chosen, then to see Stephen and Jenn and kids. Sherry and I came on to the RV park and set up. We all met at the ‘Front Porch’,  An old home remodeled into a restaurant. We had a great time. Seeing the ‘twins’ together is such a joy!

It sounds like a wonderful trip all the way around. Isn't that what makes life grand- happy times with family and friends?!

I got a snicker out of the "it's time"and did not even have to be there.

Have a great trip!

Oh! Just look at that sweet Rosemary … I can't even!
Yours sounds like a wonderful getaway, Jack. Good thing about checking the pump! (Isn't that what they call a "God wink"?

It's not fancy, but we have a little 'meat and three' place right up the road called "Front Porch."

Myra called it a God Wink, but I call it The Holy Spirit prompted you to look at that water pump. Good thing you listened! Rosemary is adorable. I think she has Grandpa Jack wrapped around her fingers (and probably Great Grandpa Jack too). Sounds like a great restaurant called the Front Porch to gather and celebrate being with family!

Sounds like a good "Road Trip", Family Time is important ! Glad your out and about ! Enjoy the Road with your Honey ! Happy Trails ! Gary an Anna Mae

I love reading that you are having a great time with family. RoseMary is precious! I bet you and Sherry want to just eat her up.
Have a wonderful Labor Day.

I love that you hang out with the phamily. We have been lost since the passing of sweet baby Alastor Avery. So we all try to go places in a crowd. Rosemary is sweet as can be! What a beautiful blessing, having the kids all together. I love the restaurant name. Sounds delightful.Have a wonderful Labor Day. Hugs to you and yours

Rosemary is precious and obviously the apple of her grand and great granddaddy's eyes...and grandma too. Sweet to trip down the road with family.
We're meeting on lil sis's Front Porch for an afternoon of lawn games, cards and chicken and corn on the cob. YumYum. Happy Labor Day to you all....we labored over a load of firewood first thing. lol
loven'hugs from up north where the sun shines

I'm glad you had a great time! It's so fun to see family and enjoy everyone. Rosemary is adorable! I hope you are having a good Labor day!