New stuff apple cider doughnuts & the confession of a cook 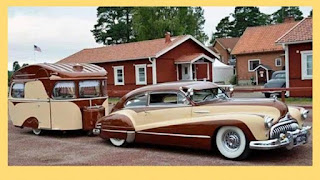 1948 Buick and matching trailer. this would be a neat combo to travel with.


I have heard about apple cider doughnuts twice in the last two weeks, So we planned to give them a try. WE found Grand-dad’s Orchard and was shocked at the crowd. There were 100’s of cars and visitors.
Below from one parking lot. 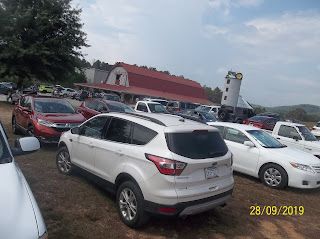 The line to the bakery was about 50 yards long. We stood there a few minutes then decided to browse thru the apple store. 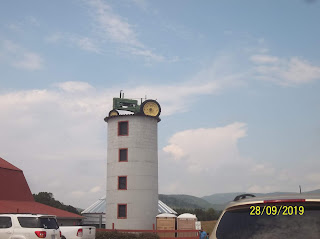 Grand dad musta had too much hard cider to park his John Deere up  there.
We sampled several names. We decided to come back when it was less crowded.  Grand dad’s is more like a festival with rides thru the orchard, u-pick trips and some bouncing games for the kids.
Just down the road was another orchard, not crowded at all. We stopped and bought some doughnuts, they were very good.
On Sunday we went back to the same orchard and bought some ‘chow-chow’ and a dozen doughnuts to take to Belmont.

I mentioned festivals above. I thought of my Nephew Ted. He was into BBQ cookouts for years. He manufactured the Big unique BBQ grills. He has made all kinds, one out of an antique car and one from a truck. He told me of a confession of a friend. He said, “On the way to the cookout my friend Joseph realized he had forgotten his special recipe BBQ sauce he used in completion. In desperation he bought two jars of sauce at a grocery and mixed them, just so he could be with us and compete, He WON!”  Ted said Joe was embarrassed but after winning, he really hated to confess, and didn't!  LOL
Nite Shipslog
Posted by jack69 at 8:50 AM

I've had apple cider donuts and they are delicious. Glad you persisted and got some. Apple Orchards are a great place for family time in the fall. My daughter and her family have been and had lots of fun. I'm having a glass of cider this morning instead of my usual orange juice. Hope the donuts make it back home. I'd be tempted to eat them on the ride.

Teehee - I would not have confessed it either! I just wouldn't do it again. Love apple festivals - we are going this Saturday.

That is too funny with him winning! I bet he never forget the sauce for later events! Sounded like fun exploring the different apple orchards. They can get so busy this time of year with harvesting time.

Too funny about Ted's 'special sauce'! I love seeing some of the huge BBQ grills and smokers … good BBQ is Serious Business.
Now, would you pass me one of those donuts? *smile*

Well, I mean, Duke is the only one who knows the secret to baked beans so Ted is ok with his secret. hahaha.

I have never had cider doughnuts but I bet they are delicious! Glad you were able to get your hands on some. OH and chow chow. That stuff is good on almost anything!

Apples into donuts must be awesome! We had some fried apple rings in Switz. they were toooo good.

The above car with matching trailer is gorgeous. If only one could explore it.

We like Cider doughnuts once or twice a season with some warm cider than that's it, The Cider is only good for us during the "Press" season, when it is fresh ! Sounds like you are enjoying yourselves, Glad you are ! Take care, Gary an Anna Mae

Woody has a point......best cider ever is freshly pressed. It's been a yr. since we had some. I'll bet the cider doughnuts Are the best. I just a min. ago, pulled Slab Apple Pie Bars out of the oven. The house smells awesome.
Love the '48 Buick with matching trailer. I want! The apple orchards sound like fun. Ya know Bill wouldn't stand in line either over walking around and sampling apples. lol Love the John Deere parked atop the silo. We know of a place where there's a gazebo parked on a silo to advertise the ones they build and sell. You two continue enjoying fall.
love n' hugs from up north where we are predicted a long, cold, deep snow winter.....in hopes of an extended fall in the mean time.

Love all your stories, those doughnuts sound wonderful! Just finished a sammich at home, got to go clock back in, OMG. I got called to work and be there at 6 a.m.