Problems, “I can handle this”

Interesting Truck:  Is this a LIMO truck? 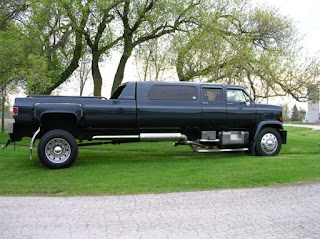 For today:
I heard once if everyone threw their problems in a big pile so you could see them, and the choice was given, YOU WOULD TAKE YOURS BACK IMMEDIATELY.

I am not sure how true that is over all, but in our case, at this time in life we REALLY have no real ‘personal’ problems.

Many reading this drivel, have faced real problems in their lives. The death of a loving mate to me would be a fate worse than death itself. The death of a child would be next in line for me. Some of you have and are facing life threatening circumstances and disease.  Bad, but priority wise, behind those listed above are financial problems.  HOWEVER when facing ANY immediate ‘problem’, that is the highest priority in our minds. NOT that it is worse than death, but that it is the one that eats at your mind.

Ever work for a boss that has been promoted far above his/her ability to handle the job? That can drive you bonkers and I guess could affect your health. I have had two of those! LOL I can laugh now. But at the time it was hard to say ‘this too will pass!’

For now, we will be departing NC within a week (I HOPE) headed South. There was a time finding a place to park the coach was NOT A PROBLEM, then it got a little tough. When that happened we bought a cheap fixer upper and had a place to park in the yard, when spots were scarce.

Last year we decided to downsize (again) and no longer have that house.  We want to stay in Florida the whole winter, but the only reservations we could get are around Orlando from the middle of December to the middle of January.

Son Mark tells us the house in Deltona is still available for us to park beside, so we will have a place to sit until our reservations start near Orlando mid-December.
The other little problem:
Zorro in the Cat House:
Nite Shipslog
Posted by jack69 at 12:51 AM

In the realm of things that is really not a problem at all. Sounds like you have found your answer. This is peak season for those going to Florida to get away from the cold. And since the property is still in the hands of family. You'll have the perfect spot to park awhile. Hope you have safe travels winging your way south.
Love and hugs from Ohio where it will be a warmer day in the 40's for us.

Zorro looks cute in the cat house! Maybe he and Stormy will have to come with you guys to Florida! Interesting how it is hard to get a place to stay in Florida. Must be a lot more of snow birds heading that way. I know a lot of my family in Pennsylvania, lots have moved to Florida and those that are left behind wish they could go down there. Those cold winters take a toil on people.

That's a wonderful perspective about the challenges Life hurls our way. Yep, my last (full-time) boss was a perfect example of the Peter Principle. :)
I was thinking about Mark and your Deltona house just the other day! Wonder if it wouldn't make a good Air B&B … after you're done visiting, that is. :)

I've also seen some take positions they had no business receiving......one bit him in the butt when he couldn't handle it. Karma! Nice you can park by Mark for a while. This is when I have to say that I don't mind my house in winter wonderland and the cabin to retreat to. It snowed hard last night and it's an absolutely beautiful place to be. Everything looks soooo clean. Zorro is a cutie. Set their house outside and they'll still use it and also be fine fending for themselves. Cats are great survivors.
love n' hugs from our northern WI home to your southerns landings. Travel safe

Hey Jack have you ever checked Military Vacation Club? I know they have really affordable lodging but I’ve never checked to see if they have camp sites available.

I'll bet you will be happy when you 2 get to Florida, Hope Sherry's knee an leg are getting better ! Take care !!!

It is like to vacation spots for the winter - too bad you can't take the cats with you!

I don’t know what you look for in a campground but we were at the Lake City RV Resort here. It’s just off I-10. We paid the monthly rate with senior, veteran and good Sam discount. I think there is another just up the road from that one. But we might be a little colder here than Orlando. :-)
Take care, Sheila

Last Thanksgiving, I went to Sheila's for four days and to Shawn's in Texas for Christmas and my worry was about Sam and my two dogs. My son that lives around here seen that they were feed and took care of. Sam is an indoor cat now and it's ok to leave him in I have security camera's in the house and could watch him at time he would be going from room to room looking for me. I ask the granddaughter to come by and sit with him and I would pay her, I never saw her there, but her mom said she came once. My son Terrie was in and out. It was sad so I will stay at home with them are hire a house sitter if I ever must leave them again. You will miss the cats I'm sure. Have a safe trip traveling. Jean

I hope you have safe travels and a place to park your home! Enjoy your warmer digs. We have good friends heading south in a few weeks. Their place is south of Orlando and they really love it there. I doubt we'll ever be snow birds but I also don't believe in "nevers"! Take care!

I would love to head South for the Winter. I think Zurro likes the cat house.

Prayers for a safe trip, just know there is almost an acre of pristine grounds for parking your mobile home, also septic for disposal of potable water....and super strong power cords...beautiful sunrises and sunsets...and most of all four blocks from the post office, restaurants, [Apllebee's & Zaxbys, grocery store with Mexican specialties grill in back] Come on down!!! You can share your wisdom about the builders/masonry/painters' duties that are waiting in the wings. My medical leave ends Wednesday, I'd love to have an overseer a couple of hours a day!!! Come on down!!!