Early interesting Cars:
This is a tire company's idea of a good car. LOL 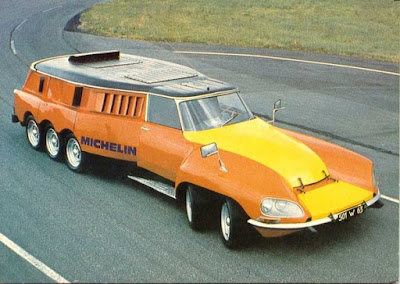 Now today:
I had the idea of getting Stormy D and Zorro warmed up to eating outside rather than the basement or garage. So I took the food across the driveway where Stormy used to eat before she would live inside.

They seemed to be enjoying themselves outside so I went on to Jack jr’s house to help him install an antenna.  When I returned two hours later I found Stormy in the basement and no Zorro. I chewed her out and asked where Zorro was.  Then I said come on back outside and show me. She actually followed me to the place where they had been eating and stopped.

I walked up the road calling for Zorro.  Then back to the mailbox. I walked down the trail where I last found Stormy and her kitten. As I turned around there was Stormy on the trail behind me. That part of the trail is just beside my neighbor’s house.

I asked Stormy again, “Where is Zorro?”  I was sure something untoward had happened to him. She looked up at me and then over to Jim’s house. There was Zorro in the crawl door.  I called and called and he would not come to me. He turned and went back under the house.

Neither cat has returned to the basement. I have left milk and food there and the door is open. So far it looks like the Feral nature has taken over and they just may be through with a clean house. LOL

I will make a note if there is any change before I post this in the AM.

I was a little surprised that Zorro would not come to me since Stormy was at my feet. Normally he has been running over to play with my shoestrings if his mother is there, but not today.

PS Both mama and kitten are back in the basement. I plan to feed them outside for the next few days.
Posted by jack69 at 8:31 AM

Nice you rare trying to acclimate them for when you are gone. They are spoiled and expect you to keep doing what you've always done, now it's had to make changes, ever more so for a cat.

That is HARD to make changes...

I was panicking reading this, hoping something bad had not happened to Zorro! Its going to be hard when you and Sherry go to Florida and we don't get these updates on Stormy and Zorro!

I don't know the first thing about cats, but several times here, I could swear Stormy knows exactly what you were saying. For instance, when you asked where Zorro had gone off to, and she turned and showed you. Wow!

I love YOU, Jack Darnell and by association, your beautiful bride and the HANDSOME boys, Jack, JR. and Mark [that devil in diguise]...Love UR kiddos and their kiddos and want to wish you a heavenly trip to Flawda. Love and warm hugs from Chilly Chobee!!!

glad you are looking after the cats. they can be stubborn, that's for sure. i hope they don't think you desserted them when you leave. glad zorro is back with stormy.