An American car
That Corvette ON SATURDAY 16 2019! 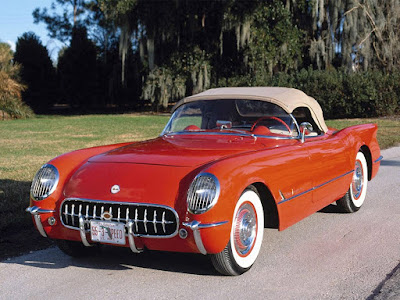 Now today:
I am reading as much as I can on cats. Stormy does let me pet her. But At times she will run as if startled and I cannot touch her. Zorro will seldom come close unless Stormy is there. Stormy was gone 4 hours yesterday. She is still a little hussy methinks.  LOL I did get Zorro to come to me and get some petting, but as soon as I put him down He ran and hid.

I know my neighbor will feed her most of the time. She was feeding the cats back when Shirl was. I hope I can face facts that I am a nice break in their lives, but not the center. They have definitely had it easy with food being handy, but I still see Stormy stalk birds and also jumping and flying bugs. She even delivered a dead mouse the other day. I hope it wasn't living in the basement.

I know from seeing videos that bears, moose and elk will fight for their young. I do not think that is true of cats unless they are nursing maybe. If Stormy D sees a threat she hits the road with seemingly no concern about leaving her kitty.  Of course the kitty also scoots away and hides when mama scampers away. I just wonder if that is a built in instinct that ‘normally’ works for them.

We do know for a fact that this is at least the 4th litter and Zorro is the only kitty that has made it of 3-4 weeks without being killed by predators.  I think that is only because I about forced her to live in the basement with Zorro.

BTW Zorro has inspected the Feral Cat house and stayed inside at least 30 minutes. I haven’t seen Stormy go inside, I did see her on one video stick her head inside. I keep the trail camera on the cat house. I liked these. I called it leave my tail alone:

PS: I will not get Stormy ‘fixed’ this year. Once I decided to, it seemed so much other ‘stuff’ just covered me up. :-(
I tend to forget my age and promise myself more than I can deliver. ugh!
Posted by jack69 at 9:48 AM

We'll keep hoping they both adjust to their winter home and keep warm when you are gone. Nice the neighbor will make sure they are fed. They just don't know yet how good they've got it there with all your TLC.

They sure are cute cats! Its good that Zorro has lived this long! I'm hopeful for a long life for him!

Love that Zorro … a lil miracle with paws. I'm glad to know they'll be well fed while you're away. Now I'm wondering if they're going to miss you quite as much as you're going to miss them! (*smile*)

Nice Post, like the comment about "Our Age" and doing more than we think we can, I went outside today and "Shoveled" some on the ice in the driveway, didn't do much or for long, I could feel My Honeys eyes burning through the kitchen window where she was canning Deer Hearts ! I quickly put down the shovel and got inside !!! Hope your Honey is Healing fast, we have her on the "Prayer Chain" ! Sending warm regards and love your way, Gary & Anna Mae

I saw a kitty on the side of the road and stopped to get it before a car would hit it. Now way was that cat coming to me and took off running. I would go by during the week and try and find it but unfortunately I saw it yesterday on the side of road and it had been hit. That's the sad tale of most feral cats and their babies. Yours are lucky to have you and a place to call home with others who will also take care of them. Yes, many times we have grand ideas of all that we want to do and then reality hits and we have to slow it down! Take care and I hope all it well with you and Sherry!

We haven’t had a cat in years. Our dogs wouldn’t hurt a cat but they would chase it constantly. That what they do.