The cat house move and an old truck 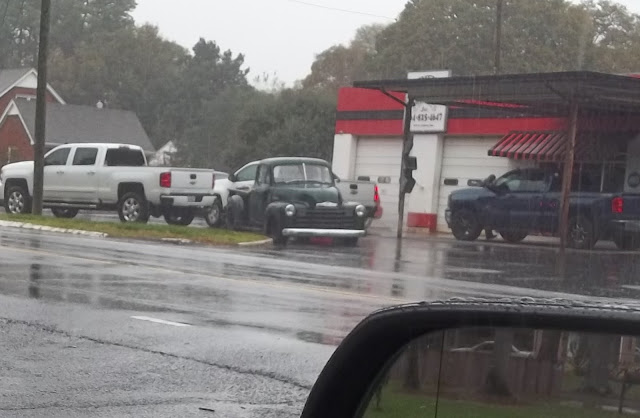 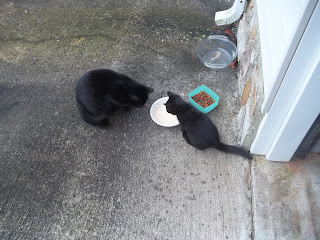 She says, "Hold it Zorro we give thanks first!"

It is time to move the cat house. I will place it among these Leland Cypress trees. 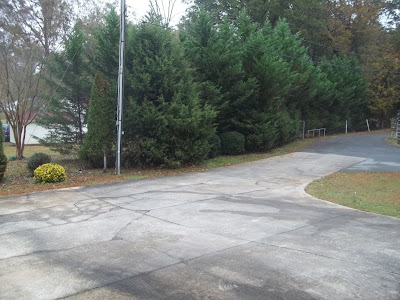 I have it placed and leaving the terry cloth over a board leaning on a stool (both to be moved away) for Zorro to climb up He can jump up but prefers to climb.  Both Zorro and mama have been inside since I brought it out. 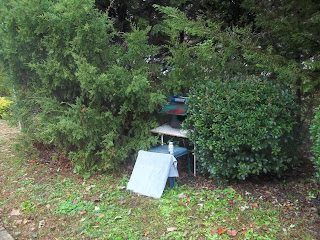 After breakfast above, Stormy D told Zorro, “We are being evicted!” 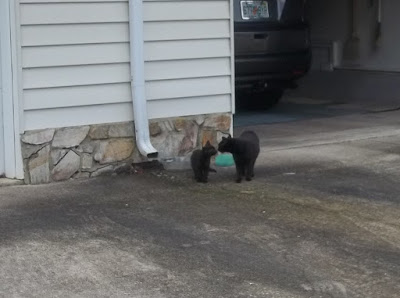 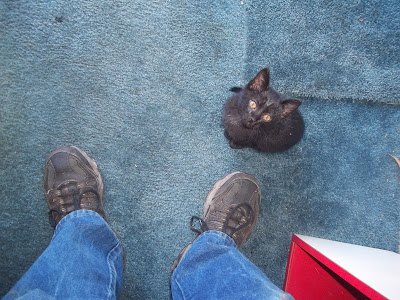 “Yep, I hope you enjoy the place, I worked hard on it.” I told him.
“Well mama says we are Feral, so Imma live under Mr. Jim’s house. Mama says there are baby snakes, mice, sweet bugs and spiders, ain’t none in that straw!” 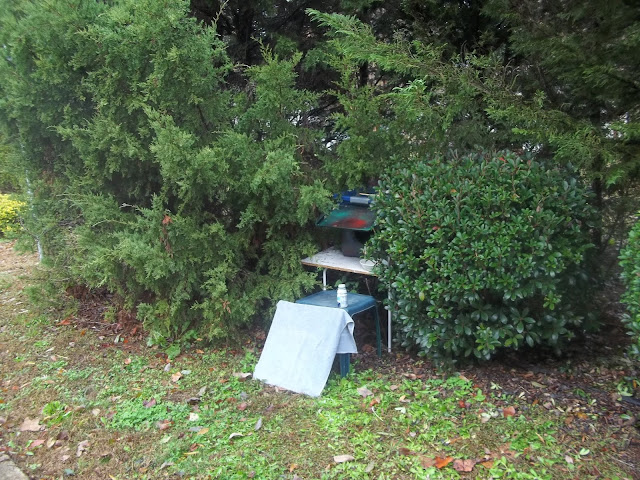 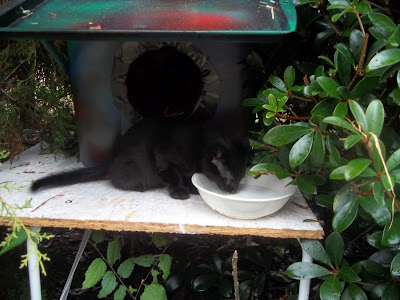 Notice how thin the hair is from the eye back to the ear, it is the same on his mama.

I really think they will prefer staying under Jim’s decaying house. He is seldom there anymore. He is taking care of a sick lady and she had a much better home.

Oh, I witnessed some ‘Mama cat tough love yesterday..’
They both climbed up on my lap in the garage. They were like this if you can tell, mama on the left Zorro on the right. 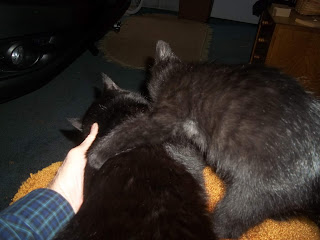 Just after this picture Zorro bit his mama in the face a little too hard and Stormy jerked pulled Zorro to her in a big hug and bit him hard enough for him to squeal.  Then she pulled him tighter in a hug and began licking him. I thought that was neat.

Headed to the Dr's office, we pulled out onto South Point Road in front of Groner’s old service station was that truck in the header.

That is a 1950 Chevy ¼ ton pickup. EXACTLY like my first old green work truck. I hauled the materials for the entire house on that  old truck of mine.  A lot of memories went through my mind.

So glad you found a place they like to stay in. Now you can rest at ease while you are gone. Just knowing that they will have a shelter from the water is peace of mind. What a treat to see that old truck that brought back good memories for you! Good news too that you can be on your way to the sunshine state before it gets too cold. Have safe and happy travels.

I think those kittys have a nice home. It will keep them warm and safe. THey seem to have gotten really attached to you. I think your gonna miss them and they you. Hope you kids have a safe trip. Wish I was going to Florida!

Love from the West side
Lisa

You made them a great home! I hope they choose to use it a lot! I would imagine one day Zorro will take off for his own adventures and sadly leave behind Stormy! Glad to hear the good news about Sherry and her doctor visit! Safe travels to Florida!

i'm glad the two kitties have you to take care of them. also good to hear sherry is doing better.

I'm glad to hear Sherry is doing better and you guys have a safe trip. I'm thinking that my Florida kids will be heading north this weekend. Take care Jean

How nice of you to make provisions for your kitties! They are precious! I had one kitty with thinned hair like that, too. She was a calico.

I am glad Sherry got a Dr's release. That is always a good thing! Happy travels to you both. Hugs- Diana

You have a "Big Heart" making sure Stormy and Zorro are OK, So Happy Sherry got "Good News" and you can head South, You going back to Deltona ? Safe Travels and Love from the North Country ! Gary & Anna Mae

Cannot wait to see y'all! Have a safe trip and I'll say prayers for your travel days. Love, Glenda p.s. Really like dogs vs cats but am captivated at your stories :)

Great news about Sherry! I loved that story about Stormy biting/chastising Zorro, then pulling him into a hug. Have you thought about writing a book about them?

PS - That's a great-looking set-up you've created there in the cypress!

Have a safe trip and I'm glad Sherry is good to go too! I hope Stormy and Zorro will be there to greet you when you return. I love that old truck. I want one just like it in red!

Yay, Sherry!
Your cats have learned so much about love from you.