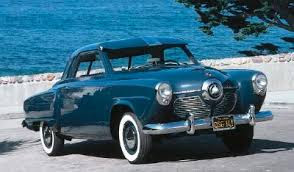 Dad was a GM man mostly, I know Buddy's dad drove a Studebaker, but I don't think it was the bullet nose.

I was very happy when I discovered e-mails. I could communicate with the written word.  Daily I had contact with many friends.  At the time I might receive 2-5 spam e-mails.  Being deaf, that was a God sent; BUT I have been left by the wayside, left with hundreds of spams a day to go thru before I delete, worried about deleting something of import.

Friends have gone to Facebook and Messenger.  Twitter also; whatever that is. My biggest problem is being on the net via cell signal and to get to messenger takes a couple minutes, maybe 3 to sign on.  Now that too is becoming more ‘FORWARDS’, mostly political which I am completely sick of.

Now I can use TEXT on the cell and that does help a lot.

I smiled when I received the e-mail I posted yesterday from Buddy. Many young men took jobs at SERVICE stations and learned to start the pump on slow and could clean windshields before $1 of gas was pumped. To be honest most of the cars asked for 1 or 2 $ of gas when they stopped. Only RICH folks said “Fill-er-up”, or that is how it seemed. But hey, that was about 4 gallons; during a ‘gas war’ that was 5 gallons. 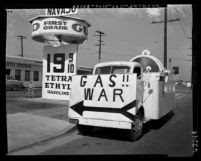 A gas war.  For you that do not know there was a time stations would start lowering prices to get more customers. Once that started, gas prices fell to the bottom. In 1955 I knew of a station that sold gas at 13 cents a gallon that was the exact tax on the gas.

Ok, off that rabbit trail and back to mine and Buddy’s jobs. He was with the Texas HP. He wrote many of their employment tests and also graduation exams. He spent a hitch in the USAF, but later joined the Army and retired there. So both of us are retired military. He met and married the beautiful Dianne, while stationed in the UK. Brittan’s loss, he brought her to the USA. He doesn’t deserve her, she is sweet and looks young enough to be his daughter!  ;-) 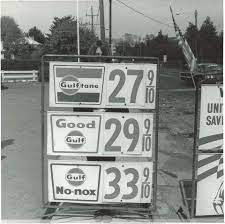 Normal prices when I pumped gas..

WE also have RVs in common; they lived full time in their RV for a few years after selling their place in New Mexico. They now have settled down in brick and mortar here in Florida.

I might ask him one day how they did that?  Just stopped and bought a home.  There must be a trick to it. ;-)

Yep, I remember those gas 'wars'! Good times.
I was a member(?) of Twitter for about 15 minutes, before I realized I'd nothing to contribute. Most of my family and friends have segued to text, but I'm still old school and prefer e-mailing.

Dad had a 1952 Studebaker Starlight Coupe. It was very reliable. E-mailing is my preference as well. I was ready to park that 40' diesel. I was noticing my reaction time was getting slower and felt it was time to settle down a bit. I'll miss it a lot, but it seems that people are on edge and getting more rude on the road. Every one be safe out there, I read this blog and enjoy the comments but I don't want to read any obits. Ok?

The good old days with lower prices. Gas is expensive here too. I have thought about buying an electric car; but I am worried about trailing miles and miles of electric cables behind me everywhere I drive. Does the cable unplug itself from my home when I've driven its full length?

I still like blogging the best of any way of media for sharing. It's something I do every day. I do remember when gas was so cheap. And I loved that they washed windows too. They would even check the oil for you too. Full service stations are sadly missed. So nice you and Buddy are still friends over the years and have great memories together !

I remember Gulf oil and what assume services received, also the 2 or 3 dollar fillups!
Have to admit that I love the sharing and caring on Facebook. I have a tendency to avoid political but it thrills me when I repost and old photo of Mom or IrmaNee and all the pleasant comments. Not so happy about texting, too clumsy thumbsy, but do keep in touch via email. This ole lady has to run to the pharmacy (drive)....not so much "running" these days. Y'all have a Happy Saturday, Love ya! Glenda

I remember those gas wars! I drove my new '72 Chevy malibu down to Florida with a group of girls and we spent 25c on gas! I loved that car! Anyway, I also remember gas rationing. You could only get gas on certain days. Today I saw the station down our road is at $2.99..a bargain now but I also remember when gas hit $1 a gallon and I was outraged! Ha! Those were the days my friend! Well, I'm gassed out so have a good Saturday and hug that sweet wife just for fun!

My, wouldn't it be great to have gas prices like the gas war days...I can't imagine that ever happening again. My preference is still e-mail. The kids want me to text more but I'm all thumbs and fumbles...besides, the only time I use my cell phone is when we're on the road.
loven'hugs to your sweet self and your lovely bride, sweet Sherry! It's 38 degrees and Bill just came in from plowing the yard out of all the snow. As beautiful as it is outside, I'm not ready for our winter....oh well, we do choose to live here and do love it, in spite of the weather.