Soap Dish and the ‘RIFA’!

Funny thing happened while completing the tile job for Sadie. I was fat dumb and happy, flipping tiles against the wall and got them all placed. Stepped back to admire the job and saw nothing wrong.

Sherry says,”When does the soap dish go up?” When? Right now or a little while ago preferably. I took two tiles out, then cut another tile in half to make room for the Soap dish. Sherry said Sadie asked you earlier (however, I did not hear or understand one or the other.).

I am glad I was reminded at that step, later would have been a little more complicated. So thanks to the girls for keeping me straight. LOL

Yesterday’s picture, Fire ants! Fire ants have taken over the South East. A very common site in Florida along the roads. Most folks in the South have seen them, Sheila hit it on the head.

They are called Red Imported Fire Ants(RIFA). There must be 10 Billion hills in Florida alone!

From what I understand they were introduced into the USA in Mobile ALA in 1930.They are actually dangerous and can kill a lizard in less than a minute. 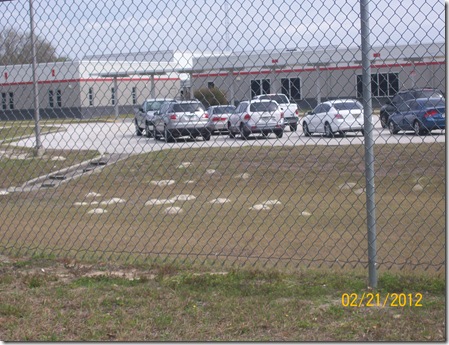 This was taken at a school near our campground. 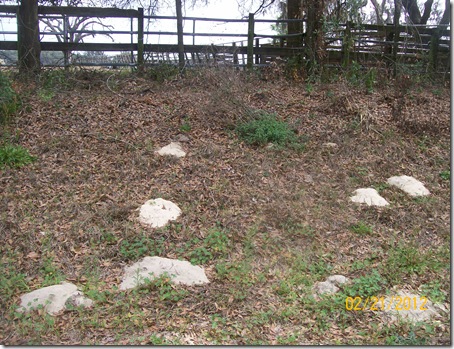 In the SE USA it is estimated the Fire Ant is responsible for $5 Billion in medical expense, human and stock. I remember Paula saying they could cause harm to cattle. 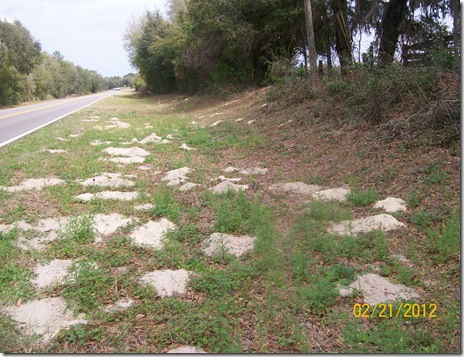 In Florida you cannot drive a tenth of a mile without seeing hundreds of colonies, or hills. All the roads in Florida are lined like this, the fields sometimes are spotted for acres with one every 7 or 8 feet. The theory is they are moved by vehicles up and down the highways. 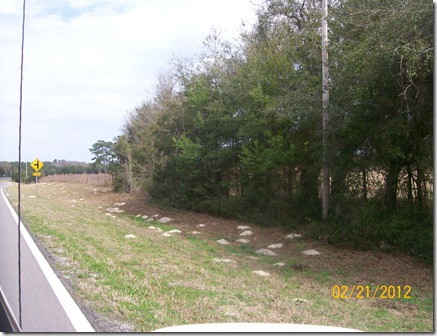 It is said that Lizards have  in the 70 yrs the ants have been aboard, grown longer legs to move faster once attacked.

Anyway these buggers are tough and aggravating. Don & Evelyn carry fire ant killer  in their motor home, and we have started carrying some to kill the nests in our sites.

I was just reminded of these ants as we traveled back and forth to Sadie’s house.

Thanks for coming this way. I know you have other things you could be doing, so thanks.

Learn from your parents' mistakes. Use birth control.   LOL 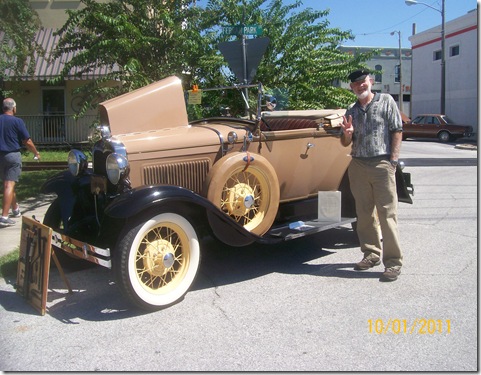 We had a friend who bought one of these. I saw him 3 weeks later and he had sold it. I asked why? He said, I forgot how hard they were to drive. He had traded it of a Modified ‘33 with power steering and automatic trans. L

(If I ever settle down, I will get one of these old cars!)

Knew Sheila had it right about the fireants...had a very bad experience with the critters at Eglin AFB campground. And along side the road in Texas! And then when we bought a "new" house in Clearwater and there was a hill right outside our bedroom window...a window which BTW was an old crank out type that didn't close properly...when I discovered the ants were coming in the window...I had all new windows installed throughout the house! If you're not already allergic to fireants you can become allergic...if you're going to live in states with high populations of fireants I'd suggest talking to your doc about carrying Benadryl tablets around with you just in case. The sooner the Benadryl is taken the less severe the allergic reaction. And you might even need to carry an epipen...talk to your doctor!!!!

I guess this is the time to be grateful that I don't winter in Florida. As far as i know we don't have fire ants in Ohio. We just have to count our blessings somedays even though we really wish we were enjoying that wonderful sunshine you have there. You two make a great team...what one of you doesn't think of the other one of you will. You are blessed to have each other. I know I said that before, but it is a truth worth repeating. Hope you enjoy your new site there and have a wonderful Wednesday!

My daughter in law found out what fire ants were. She was mowing the yard and she didn't notice right away that they were on her and a friend put nail polish on where the ants were so they could go no further. They talked like they were in a column but I wasn't there. I vowed then I never wanted to see a fire ant. I would not know what they were.

I never have anything better to do then read your blog. Always an interesting subject. Glad you got the soap dish in, in time. I should have known those hills were fire ants. I've met up with those guys doing yard work and they can put some hurt on you that lasts a long time.

Oh my "Red Ants" brings back memories of when I was a newbie to Florida and I stepped in a pile of red ants. Oh the pain. They covered my entire leg in seconds.

I landed in the hospital with a severe reaction.

Never walked barefooted in the backyard ever again.

Coming originally from New England, I was not used to "Red Ants". Plus, the Augusta sod is so different thant up north.

Oh, give me back the city life! LOL

Glad the girls reminded you of the soap dish or you would have had a heap of trouble later. We have those fire ants also. I kept them down pretty good when Ken was in pest control but I was noticing last week how fast they are coming back. We need to get something else. Helen

Ants were a lot of trouble here in my back yard last summer...You have such a special and unique blog...Always enjoy reading it. Blessya and HAPPY driving along the highways as you explore new sights and have new adventures. ~ Jean(Rome Georgia Girl living in Calhoun

We keep ant poison on hand and when we see a big ant bed on goes some poison. I'm not sure they all are fire ants. I haven't seen any around our house this big. Glad Sherry and Sadie didn't let you forget the soap dish. lol. Take care. Jean

The hills being white fooled
me. I am use to seeing light
brown sand when I see a hill.
Be careful and stay away from
the fire ant hills.

I see JeanJournal lives in Calhoun
wonder if she knows our cousin
that writes for the Calhoun News.

Glad that soap dish got put in place. Sometimes the most obvious things are the ones we miss. LOL. I hate ants of all kinds. I once saw a field crawling with them as far as the eye could see. It was creepy. I do not envy anyone with an ant problem. Take care. my daughter is working CRAZY shifts and I have been babysitting as a result. Have not been able to comment as much.

Paula's right ~ they can put a hurt on you that can last a long time. The big Slimmer got some nasty bites on his feet once while visiting in TX. My sister in Texas also ended up in the hospital because of the little buggers. She was sitting out in a lawn lounge chair and they crawled up the legs of the chair...biting her all over . She was napping and didn't even notice them until it was too late. Keep a close eye on them when you're out walking around!! At least a gator you can see ... these little buggers are another story.