On the lighter side

First some back ground. We just lost a friend last week, Sam. I met Sam when I was 15. When I was 16, Sam helped me forge/change documents to show I was 18 and I tried to join the Corps with Sam, who was 17. Just before the swearing in, the SBI took me away. They threatened to charge me with several things including  forgery, etc.  Sam continued the trip and spent his hitch in the Corps.

I joined one day after my 17th birthday. I had no idea what life would be like. (thinking Lucy’s GGson) Slowly I learned. I had no idea how men in the field got their food, etc. I learned you the food came in one tightly fit box per day. It went into or on your pack when you moved the responsibility was yours.

For each day you got three cans of solids. Tuna, Spaghetti, beans, sausage patties. etc. There was always a can of fruit. I loved the peaches. There was a can with round crackers, round candy and round cookies.1-3 of each. Everyone had a can opener on their dog tag chain. Then there was the ‘soft pack’, in it was a pack of cigarettes, matches, salt and pepper (if it was summer, salt tablets). Then the subject for tonight: 3 napkins (not for wiping your lips!).  I know, all this time you have wondered about the toilet paper. There were three napkins.  Not enough? YOUR problem not the Corps. You done it you take care of it.

To be honest this was little or no problem for most of the boys who were hunters or from the country, but the city boys?  They didn’t know about corn cobs, leaves, bark and smooth sticks.  The guys from the coastal areas and Florida preferred the Spanish moss.  No matter where you are from, you learned to save those valuable 3 napkins for the final paper work.

I know you  guys thought these men had toilets with rolls of paper with them out in the field.

Oh, you ask, “Where did you do it?” It was called a split trench, about a foot wide and you straddled it.  That was one of the ‘work details’ divided among the lowest rank.  If you were alone, you dug a cat hole.

Smile, I know most folks on here have had to improvise at times in your life.

True statement, “Necessity is the mother of invention!” 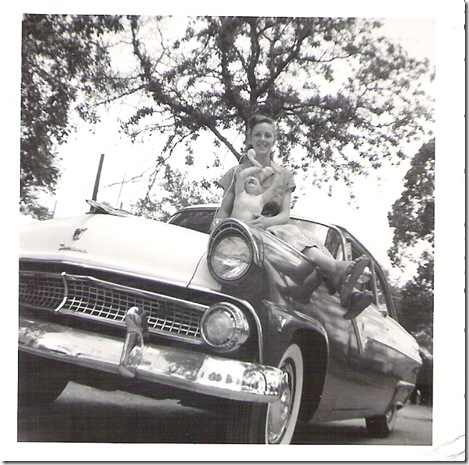 Sherry on our 1955 Ford, Jack Jr. trying to give her the phone. Loved the  whitewall tires until you messed them up against a curb.

I've got to admit that is one thing most of us don't think about. But yes, those men in the field do not live an easy life. We are so comfortable here. Lots to be thankful for and I'm thankful for my soft toilet paper. They say that life is a lot like a roll of toilet paper ...the closer you get to the end of the roll, the faster it goes.
Chilly but sunny here today also. Have a fantastic Friday!

We have 'The Eisenstein Dump' at the cabin, you've seen it. But out in the wild?, as kids, some of us older ones would go all day to pick raspberries with the folks, way north of home, what used to be where Mama grew up. The berry picking was great and fast but when ya had to go, well, thank goodness, we each had toilet paper in our pockets. Not as easy for a girl, mind you. We have to squat for both. While hunting too, the little I did, still had to either hold it or grin and bare it, go real fast, cause it was freezin' out. Oh the joyful memories. Now, I'm reminded how grateful I am for flush toilets and toilet paper.
You, Jack, are a funny guy, but truthful. I cannot imagine what it's like for today's military out on the front lines.
BlessYa'll

That was really interesting to me with Ryan just leaving. I have a feeling there will be a lot of surprises in store for him. He has a stubborn streak in him, but I think he will do ok. Probably wonder at times, why did I ever do this.

:) Nearly no nature left over here in the city. Thank you for the inspiration to think about this subject. Please have you all a good weekend.
(Will try to get some pictures of the dinner.)

Gosh you are going to think I am dumb or selfish - I never thought about it until you brought it up - I guess I thought it was more like MASH and had portable (?) bathrooms.

Wow that was a lot of work and well work.

Oh my goodness this was an educational piece of work. Bless all the guys and gals who have served and are serving. Sometime we just don't know how good we have it.

Did you also have Chiclets in your soft pack? Can't forget the gum!

I grew up near the Uwharrie Forest. Siblings and I had great times roaming the woods. Maple leaves were our leaf of preference, lol. But when we had opportunity as kids to get C-rations, we liked to save the TP sheets for our "survival packs." I saved the little P-38 can opener which I have to this day. I guess because the Army rations were a change of pace from our regular diet of mostly biscuits, beans, and veggies, we considered it a treat. I liked the fruit cocktail and the apricots.
The cocoa was the bomb. We pretended it was snuff and had great times. Nothing like getting nearly choked to death inhaling cocoa.
Daddy told me a story recently of how they were always running out of toilet paper at his Army base. One afternoon, they were instructed on how to use two sheets of TP to get the job done. (I will spare everyone the details.) After that, he said someone managed to keep the supply up.

This was a fascinating one to read, Jack. I never really thought much about "life out in the field" so to speak with rations and dealing with the "business" that one must take care of. Interesting if a person didn't like tuna, but I guess they made due with what was given to them. And three napkins, all I can say is, that could be challenging some days. I need to leave just three on a roll for son and see how he handles his "business".

I'm sure life is very tough as a soldier out in the field; again it reminds us to be thankful for those who are willing to go and serve our country and our freedom and for that I again thank you!

P.S. Condolences on the passing of your friend, Sam.

Also I love the picture of Sherry and Jack Jr. Her expression says that she is enjoying motherhood.

Those '55 Fords looked good then - and they look good now!