WE have been a two computer family now for a few years. We were attached to the internet via cell phone at first, now it is by a small device from Verizon. it is a receiver with a telephone number. WE hook it to a Candlepoint router so it reaches both computers. 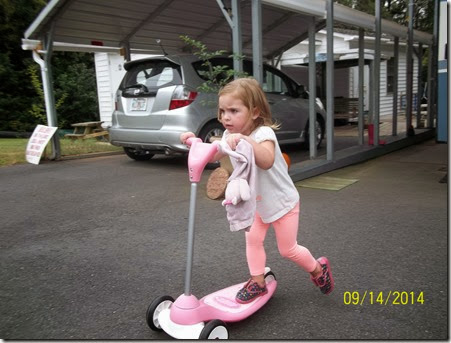 I use my computer for my writing and to keep up with the e-mails.  Sherry loves the computer for FB, for one thing, because she keeps up with Elsie Mae (a little) and Stella. More Stella since Reece makes a point of letting Grandma see the latest pictures. 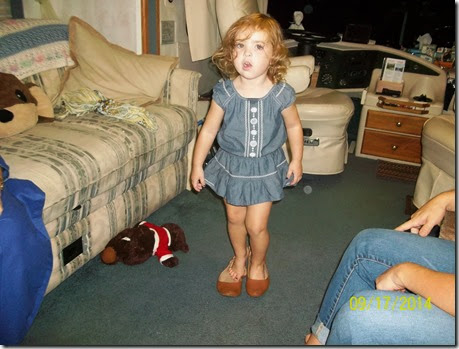 (Stella before we left NC, She is in her mama’s shoes)

In the motor home I designed a cabinet addition and had it built to match the original cabinets. It allows us a small desk area on either side of the dining room table. Originally I was on the left and she on the right. Somehow when I got a new computer we switched sides.

Now that I have a new computer we switched again. While rerouting power and data lines I found four unused cables and one transformer that were not used. Looking to the front of the motor home. Sherry sits just beside the Refrigerator. 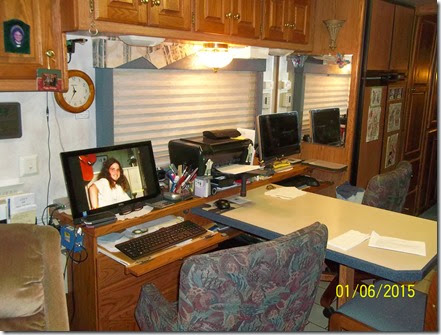 This is looking back towards the rear of the motor home. Sherry’s computer is off because she is in bed reading. The printer is shared and is in the middle. 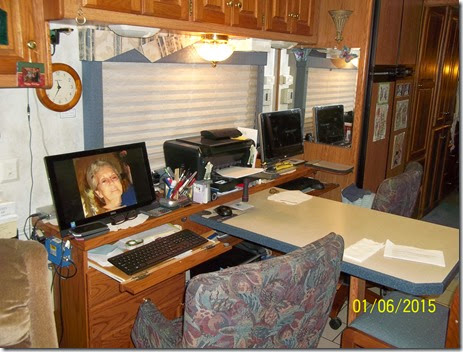 (As you see on my monitor our screen saver is going, Grandson Josh is above and Sherry has popped up during this shot) Notice by Sherry’s chair on the refer are the pictures colored by Stella and given to grandma!

So now we are cleaned up again. Now Sherry has my old computer and her lap top will go under the bed and held as a back up.

There have been a few mis-steps but I think we are finally settled down.

I am not as computer savvy as my sister and my wife think I am; I am just pretty lucky (methinks).

WE are on the road today for Harry’s Funeral in Pinellas Pines and then on down to Sarasota to visit with a dear friend Judy, from Maine. She lost her husband (AL), a few years ago, he too was a good friend and fellow camper. I just thought, in his early life, AL was also a Coastie like Harry. They had a lot in common, and we did spend a lot of time in the same parks as Al & Judy.

So today as you  read this, we are having a bitter sweet day.

Looking back on life, I remember the best parts MORE! 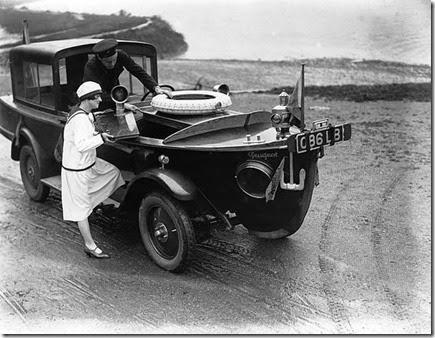 I thought I would do some odd vehicles, this is one of the first Boat cars. By the lady’s dress would it be the 1920’s?

I like the computer tables you set up, Jack. They seem cozy side by side like they are. Stella is adorable; all little girls seem to enjoy wearing their mommy's shoes! Safe travels for the funeral; always hard to say goodbye to a loved one.

What did we do before our computers invaded our homes??? Cute little set up you've got going on there. Stella is a cutie in her momma's shoe!!! adorable. 'Wishing' you safe travels.

I love the set up for your computers. You make the most of the small space for sure. I did get the fridge fixed yesterday. It was a bad sensor and once replaced everything works good as new again. You are having a bitter sweet day of there. So sorry once again for your loss. Glad though that you can meet with another old friend afterward. Sweet memories for you there too.

How nice is that. I LOVE the way you have your computers laid out. What great areas you have arranged for them. Very functional, indeed.

Neat as a pin as they say. Safe trip and enjoy your visit with the other friend.

I love the HIM and HER computer places. I guess you two can take a lot of time together - I have to be honest I don't know if Rick and I could do that! lol

Lovin' the 'his and hers' set-up you fashioned!
...its pretty nice, now I can imagine the two of you, side by side! :)

I'm sorry your visit to the Gulf coast was bittersweet but I'll bet it means a lot both to Pearl and Judy.

Brother you are the one who knows
computers. I know how to turn it on and off.

Stella is a cute girl. We got to
start her piano lessons. I think she wants to learn so I will see. Glad you had a safe trip and back home.