More from our First trip across country. 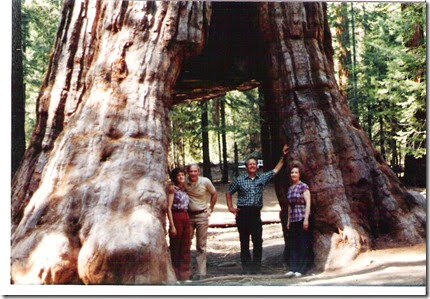 If you  go to California, you must see the Giant Red Woods, of course. 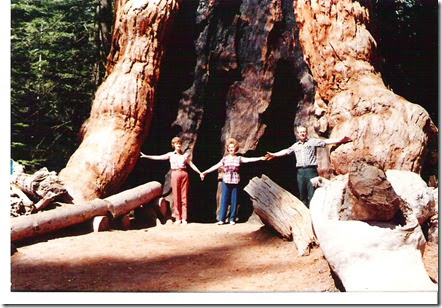 Sonny and I are both lovers of wood, and seeing these magnificent trees was a treat. 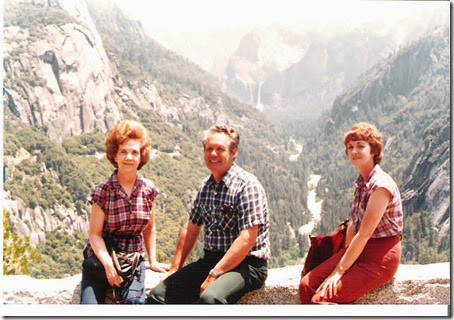 Of course a trip to Yosemite, Just natural beauty, rugged and wild. The day after we were there and spent the night a bear attack was reported on a ‘soft sided camping unit’, that is how the tent and pop up is described. 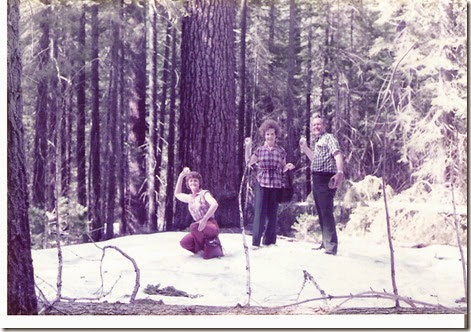 Crossing the Rockies was a treat to us southerners, snow is not a thing we see all the time. Maybe, just maybe once a year. And besides, it is cccold in NC when there is snow, we were comfortable in short sleeves.  It was summer and still snow. 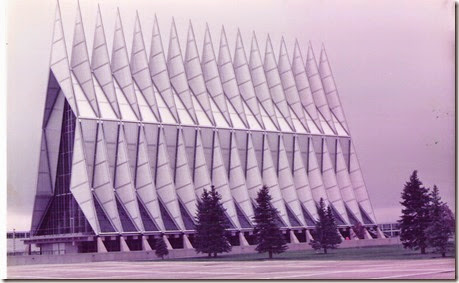 The famous Air Force Academy Chapel and its Striking construction. So modern when it was built. 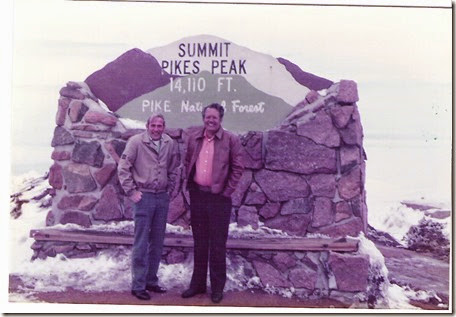 Sonny and I took the cog train to Pike’s Peak. The girls wer snug in a motel. Now this elevation was cccold. 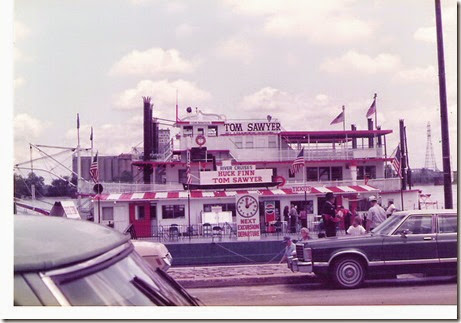 WE took a tour on the paddleboat  Tom Sawyer. 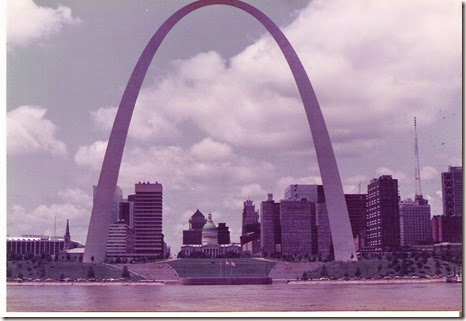 This is the St. Louis Arch. we went up in it, the whole crew, even Colette who was never too adventurous. There is a great view from the top.

Thanks for allowing me to show you our trip from over 30 years ago.

We have circled the USA several times since then but the first time was the most exciting.  Of course every trip is not the same because we tried to take different routes.

WE have found some of the nicest people as we have traveled. 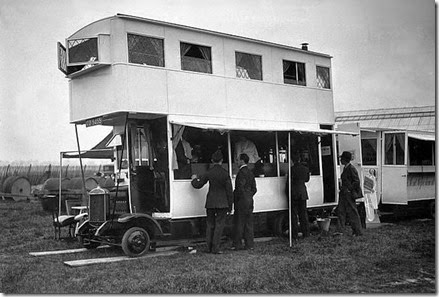 An early Mobile Restaurant. The forerunner of the Roach Coach another of my businesses, in another life it seems.

I've been to some of these places :) The Redwoods (have a picture under that same tree, LOL :), and the cog railway at Pikes Peak. That was fun and you are right, no matter what time of year, it is usually cold up there, but beautiful views! Traveling is always fun to see new things and places; neat you and Sherry have had the opportunities you have had to see all you have seen :)

Those Giant Red Woods are impressive for sure. It's fun to go to the top of the arch in St. LOuis. Looks like some of you were enjoying the snow.

It had been interesting seeing
some of the places you have been
on your trips. You and Sherry
have been everywhere thank goodness
you have pictures to show us.

Belmont has some nice Historic
places you may want to come home
and do a tour. hee hee

I would love those trees.

That's a neat picture of the Air Force Academy chapel! Can't tell you how many times on our road trips from Los Alamos to Denver, we'd play "who can spot the spires first?". (I think both daddy and I always let mother win. )

Yours is a neat series of posts, Jack. I hope you and Sherry are having fun recalling those moments, as well!

Every picture in your post today was enjoyed by me for sure. I've only ever made one quick trip out west and that was in an airplane and never saw any of the sights you got to see. We do I've in one beautiful country ! Thanks for sharing your memories.

I have a picture of me standing inside a redwood that looks very much like the one you guys are standing in.