This piece is MOSTLY MY OPINION, as I was told by one of my grandsons when he was 3 years old. “Everyone has an opinion Grandpa!” 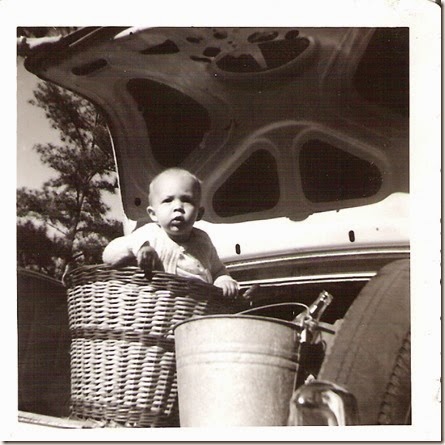 (J.Jr in the laundry basket, living in a trailer we visited a lot of laundramats! He was fussy that day and I was outside entertaining him while Sherry did the laundry, nah, he didn’t ride in the trunk. lol Pay no attention to the bald spare!)
I used to think everyone should be like us, but now in my later years, I don’t think so, some personalities do not fit the mold, and they would be miserable. 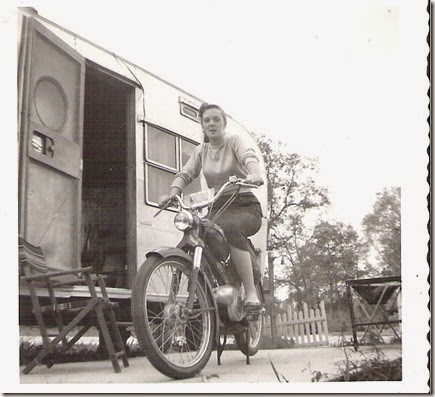 {My girl outside one of our trailers, the home made charcoal grill to her right)
Sherry and I were both raised by conservative parents who had endured hardships, stayed together, raised a family, lived through the great depression and SURVIVED. Both of us remember well parents who said, “You need to put something back for a rainy day.” They never explained why, they didn’t think it was necessary, but that admonishment was stuck deep in our personalities.
(Sherry and JJ on the hood of the ‘55 Ford we towed our trailer with) 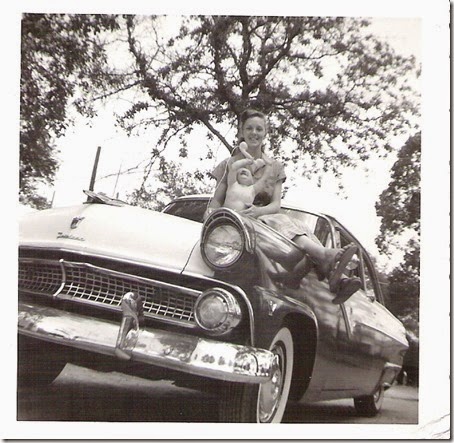 There have been very few months in our lives that we did not save something. It might have been 50¢ or $1, but something went aside ‘for the rainy day’.

(Mom and dad visiting us in Mississippi)
The thought of folks today seems to be have it now and pay later. We were different. To us a little trailer paid for was better than a nicer house with a  mortgage. 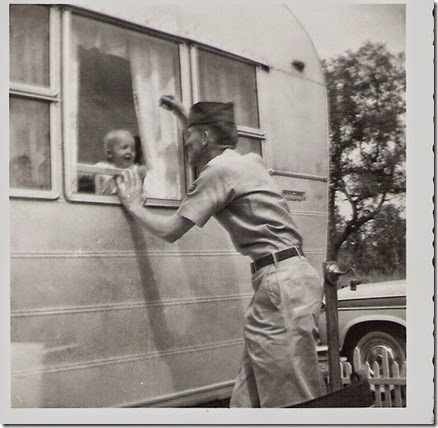 (Proud dad looking at son jack in the window.)
Jean said something that let’s me know there are others in the world like us.  If either of them had ever won or had a million dollars, you can bet most of it would have went into some savings plan for our retirement. 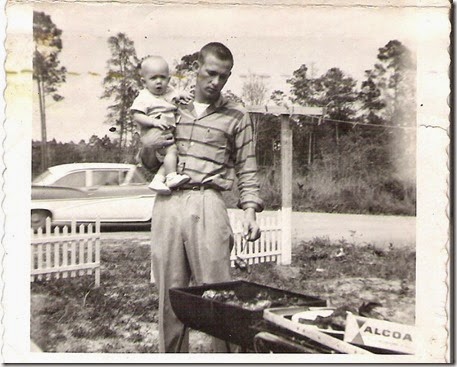 (Cooking out on the home made grill outside our trailer)
We tried to think of the future. I buy a lottery ticket most every week. I know the odds, but someone will win.  If I would win, it would go into something to produce income for my sons in their retirement. Apartments or houses. My daddy said many times never play the other guys game. I have never messed with Stocks, don’t know a thing about them. I did buy US Savings Bonds for a long time.
Just rambling here in NC in the rain. Still working on the lean-to.  Getting more ideas (sometimes that is not good!)
Thanks for coming this way.
Nite Shipslog
PS:
This would be a boring world if we were all alike (but then you could anticipate the commands better). LOL 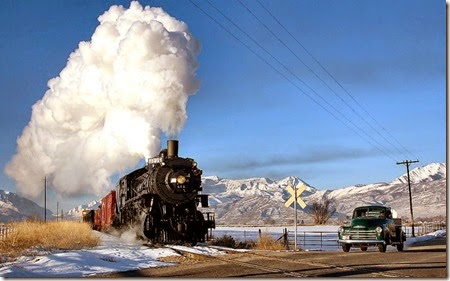 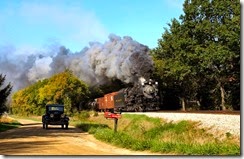 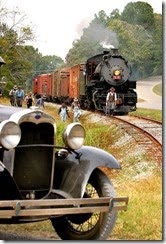 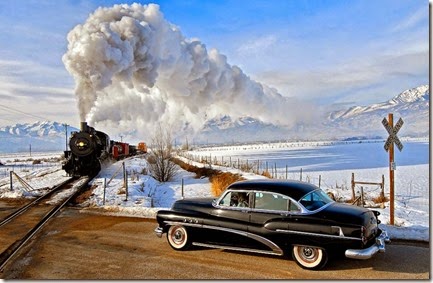 I think you and Sherry were wise, Jack, to listen to the advice of your parents and to put a little bit away for a rainy day or whatever. If more people did that, I don't think we would have the mess we have with credit card debt, etc. I think it is a lesson young people should get taught and taught often to save more than then spend.

Mel used to always say you just don't know how much you're going to need.

Oh, I think my parents tried - but my hearing must've been impaired. Thankfully, sound judgement must skip generations because my son is behaving more responsibly than I did at his age.

Love that photo of Sherry and baby Jack on your car's hood!

PS - Your grandson uttered that nugget at only 3 years old? Too cute!

The good news is that I've always had whatever was needed for those rainy days. We don't know when they'll come, but seems they always do. We started off the day with some rain but now it's partly cloudy and every now and then the sunshine peeps through. Hope you get some sun soon!

Our beginnings were similar, and we too put back money, even when we didn't think we had it to put back.
If we hadn't done that, retiring at 59 would not have been an option.
We buy a lottery ticket when we get a chance too. We know the odds are not in our favor but you can't win if you don't have a ticket. It's worth a dollar to think about what you'd do if you won.
R

I always knew you were a wise man. This post of yours confirms it.

Everyone needs to put something aside for a rainy day.

A penny saved is indeed a penny earned. you approached life in the way that now affords you the luxury to do the things you want. Good job.

Love the pics of when you, Sherry and the boys were so young!